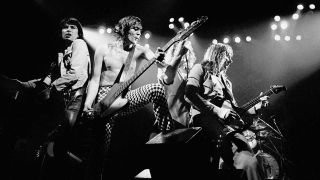 UFO are the British band who, more than any other over the last five decades,  defined hard rock as the fertile middle ground between metal and AOR.

In their prime the band delivered a near perfect blend of melodies, choruses and air-guitar-heaven riffs. Formed in London in 1969, UFO toured hard and developed followings in Germany and Japan as well as at home in the UK. Come the NWOBHM in the late 70s, they could pack the floor at any rock disco in the land.

For a decade their career ran eerily parallel to Thin Lizzy’s, but UFO were never quite as cool or bathed in limelight. They did, however, share Lizzy’s taste for drinkin’, druggin’ and the occasional fight.

Had UFO been born a decade later they might have had hits like Whitesnake, gone platinum like Def Leppard or even been ushered into rehab and off the album/tour treadmill that crippled them in the mid-80s. Or they might have sold out and gone all transatlantic.

Perhaps it was for the best, then, that their genuine flair for songwriting, built on what they knew a live audience would respond to, was never misdirected by the MTV era or some A&R guru.

Although the heart of the band has always been singer/lyricist Phil Mogg and (until 2008) bassist Pete Way, UFO have usually been defined by their lead guitarist. Their career has been patchy, but on record it divides into four phases: a false start with Mick Bolton (1970-72); a 10-year golden age begun by Michael Schenker and extended by Paul Chapman (1973-82); a slump caused by splintering, unfamiliar line-ups and short-lived reformations (1983-2002); and the rebirth years with Vinnie Moore (2004-present).

Throughout their career UFO have remained peculiarly British. Which makes their star-crossed battle to mend fences with the German Schenker and their eventual consolidation with the American Moore all the more ironic. UFO have always thrived on a dysfunctional nature, but now, reconciled with both keyboards/guitar man Neil Carter – who slipped into Paul Raymond's shoes when he died in 2019 – and original drummer Andy Parker, they’re as strong as they ever were.

Now on the final leg of their farewell tour, UFO are adored and respected by everyone from Iron Maiden to Rush, from Def Leppard to, er, Warrant.

The killer–diller studio album. That three of the songs on here are among the four that close UFO’s live shows even today tells you all you need to know about not only the quality of, but also the staying power of the album.

The title track, opener Too Hot To Handle and the epic Love To Love (with its haunting ‘Misty green and blue’ refrain) are the three in question, and there’s quality throughout this album, the first they recorded with Paul Raymond on keyboards.

It was also the first to be produced by Ron Nevison, who wasn’t afraid to stir in acoustic guitars (Getting Ready) or a string section (for the soaring ballad Try Me and Just Another Suicide). Timeless.View Deal

On the final studio album of guitarist Michael Schenker’s first stay with the band he was at his peak, from the opening Only You Can Rock Me to the stunning solo on Born To Lose. Yet Mogg and Way overpower him in the writing, and even the sleeve hints at the isolation which would see him quit soon after.

With UFO decamping to the US to record in LA for the first time (with producer Nevison again, and future Guns N’ Roses producer Mike Clink engineering), Obsession has a streetwise edge despite the romantically string-laden Lookin’ Out For No. 1 and the recorder on Arbory Hill. Vocalist Mogg is cocksure, and One More For The Rodeo and Hot And Ready are as hard as nails.View Deal

Having moved to Chrysalis Records the band took their time with this first album for them. They toured constantly, and shed original guitarist Mick Bolton, then replacements Larry Wallis and Bernie Marsden, before poaching 18-year-old Michael Schenker from the Scorpions in June 1973.

Phenomenon emerged 11 months later, by which time Schenker had helped transform UFO into an entirely different band. He took on the lion’s share of songwriting, and delivered demos backed by acoustic guitar – which is effectively how UFO re-recorded them for the album. So this may be one of UFO’s gentler records, but with Doctor Doctor and Rock Bottom it still packs quite a punch.View Deal

UFO’s second album with Schenker, still as a four-piece, saw the band really hit their stride. The material was mostly no-nonsense rockers (Let It Roll, Shoot Shoot, Love Lost Love, Mother Mary), but it also included an acoustic ballad (High Flyer) and the band’s first flirtation with keyboards (Out In The Street; played by guest Chick Churchill, former Ten Years After bandmate of producer Leo Lyons).

Dance Your Life Away is exactly the sort of track that set UFO apart from their contemporaries. It might even have provided them with a hit. And live favourite This Kid’s was never better than here, with Schenker’s Layla-style instrumental coda Between The Walls.View Deal

Strangers In The Night (Chrysalis, 1979)

The era’s obligatory double live album came after those by Peter Frampton, Kiss, Status Quo and Thin Lizzy, and proved just as big a watershed. It was UFO’s first UK Top 10, making No.8. In the US – where it was recorded – it cemented their growing popularity by reaching No.42.

Ironically, though, Strangers… marked the sudden departure of Michael Schenker with the confusing credit on the sleeve: “Special thanks to our friend and guitarist Paul Chapman”. No matter if that means Chapman did overdubs before replacing Schenker full-time, the results capture succinctly UFO’s powerful live act and make it a close-run thing with Obsession for the Essential category.View Deal

After stints as Schenker’s touring deputy/rhythm guitarist, erstwhile Lone Star man Paul Chapman got to take Schenker’s place full-time. If he was fazed that his recorded debut was with Beatles producer George Martin, it didn’t show. The sound is great, but otherwise the input from Martin (whose only other hard rock credits are with Jeff Beck) is uncertain.

The songs are uniformly concise and the performances strong. Chapman’s guitar synth opener Alpha Centauri gives way to Lettin’ Go before a brilliantly rocked-up take on the Elvis standard Mystery Train. After that the album barely lets up, and closer Any Day is a criminally overlooked gem.View Deal

The Wild, The Willing And The Innocent (Chrysalis, 1981)

If the title was a play on a 1974 Springsteen album and suggested Mogg’s respect for The Boss, Long Gone (‘Summer rain kissed the streets that bleed like open wounds’) and the piano and sax solo on Lonely Heart (both played by Neil Carter, replacing Raymond) confirmed it.

In light of Springsteen’s contemporaneous double album The River, The Wild, The Willing And The Innocent was derided by many, but it nonetheless features some of Mogg’s finest lyrics and vocals. It’s also home to gems such as Couldn’t Get It Right and It’s Killing Me, plus Profession Of Violence that’s lifted by a brilliant Chapman guitar solo.View Deal

After three somewhat iffy records with guitarists Atomik Tommy M or Laurence Archer alongside other sidemen, the supposed dream team – Mogg, Way, Schenker, Parker and Raymond plus producer Ron Nevison – reassembled. Restricting themselves to just eight new songs was clever, and allowed time-honoured strengths to be revisited in some style.

Dreaming Of Summer steered a little too close to Lights Out’s Electric Phase, but Pushed To The Limit, Stopped By A Bullet (Of Love) and Darker Days all sound fresh and powerful. Venus is top dog on the record, but opener A Self Made Man isn’t far behind and hints at what might have been. But first Parker then Schenker quit soon after.View Deal

The Monkery Puzzle gets the nod ahead of its closely matched 2004 predecessor You Are Here. Both feature guitarist Vinnie Moore, long assumed to be a shredder but playing here with a subtlety that could only come from growing up with British blues rock imports (ironically, just like Schenker).

For The Monkey Puzzle original drummer Andy Parker replaced Jason Bonham (who’d moved on to Foreigner) and the familial vibes are almost audible. Parker is awesome on Hard Being Me, Moore shines on Who’s Fooling Who, Raymond excels on Some Other Guy, and Mogg and Way clinch it with Black And Blue and Drink Too Much. UFO were back!View Deal