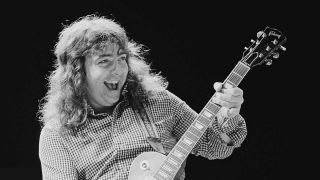 Bernie Marsden's autobiography, Where’s My Guitar? An Inside Story Of British Rock And Roll tells, the story of one of the UK's favourite rock guitarists, and of his time in Whitesnake.

In this excerpt, Bernie talks about the origins of the classic Here I Go Again, and reveals exactly what happened when he left the band.

Where’s My Guitar? is available to order now.

One song on Saints & Sinners literally changed my life: Here I Go Again. I have a demo of it, recorded on an old Revox tape machine, and the basic ideas are already all there. I wanted to get it all sorted before playing it to David Coverdale. Jon Lord was particularly taken with the song from the very start, I played him the opening chords, and he asked me to run them by him again.

"You are a clever little sod, aren’t you?" he said and smiled. He really loved the opening figure of the song, and insisted he play it on the Hammond organ.

David went into lyrical overdrive at Clearwell [castle in Gloucestershire used as a recording and rehearsal stdio by Whitesnake, Led Zeppelin, Black Sabbath and others] that afternoon. Most of the song was already written at that stage, including the complete chorus, but he was very animated and disappeared to write new lyrics. He disappeared into his room much in the same way he had for Walking in the Shadow of the Blues during the Lovehunter sessions. He went on to sing the song in a quite magnificent way, sensitive, and yet so powerful.

Neil, Jon, Ian, and I are on the backing track. At one point I thought a collaboration might help me deal with some frustration, and I asked Mick Moody to jam with me, but he said he was just a bit too busy. I played all the parts of the harmony guitar solo, and there was a nod to John Lennon’s Woman in the arpeggio guitar parts. If I’m honest, I truly believed we had a big song on our hands and David was very pleased too. But I never dreamed how big it would become.

We moved to Britannia Row to mix the album with Guy Bidmead. But even as he threaded the tapes, things were starting to move dramatically for the good ship Whitesnake. David was in talks with his lawyer, as I would shortly find out, but more immediately Moody abruptly quit the band. It was a real shock; I was pretty upset. I hadn’t seen it coming at all, although I had thought it was mainly only me and David at Britannia Row, with me doing all the guitar overdubs.

Guy, David and I continued to work on finishing the album. Jon was due to record Hammond solo overdubs, but never showed. Then he and Ian would be coming in the next day, but again, they never showed. We later discovered they had been at the horse-racing at Ascot and Windsor. David was visibly disappointed and upset. I was too. Micky was gone, Jon and Ian seemingly weren’t interested, and we hadn’t seen Neil Murray since Clearwell.

I looked at David in the control room at the studio and uttered the fateful words, "We might as well end all this, David, knock it all on the head, mate." I didn’t quite grasp the full effect of what I was saying. David’s eyes widened. He smiled wryly as though a weight was off his shoulders. He said that he thought he was the only one thinking it. I assured him he wasn’t. He explained that he had already been having meetings with his legal people in order to extricate himself from the managerial mire.

It wasn’t quite over yet. We made one final, doomed, attempt to keep things going – collectively deciding to fire Seabreeze [Whitesnake management company]. A band meeting with John Coletta was arranged at the Newman Street office. We agreed to plan out our approach at my fl at in Paddington beforehand. Everyone showed up at the Dungeon except David and, having waited without any sign of him, we left for the 2 o’clock meeting.

I was delighted to think that we would all be getting away from Seabreeze. How could John Coletta still be the manager? He had been barred from the dressing rooms in USA, barred from the recording studios, was never issued a backstage pass, and blanked completely in Japan. But I couldn’t help wondering where the hell David was. We assumed that he would be waiting at the office, but he wasn’t.

The rest of Whitesnake gathered around the great Purple onyx table: Jon Lord, Ian Paice, Neil Murray, and me. I was getting butterflies in my stomach. We were all looking at each other. Where was David?

"Before you say anything," Coletta said, "I have spoken with David’s lawyer this morning, and Whitesnake is over for you lot." He walked around the room, pointing his finger. "You are out," he said as he pointed at Ian, Neil and, to my total surprise and shock, he pointed at me.

I had been the author of my own demise with my comment to David about ending the band. There was a palpable silence in the room. I thought about the last time David and I talked at Britannia Row. I didn’t realise but he had been advised to break up the band in order to escape the Seabreeze banner. He later told me that he thought it was the only possible way out.

Ian Paice was stoical and left the room. Jon looked sombre. Neil looked confused. I simply didn’t believe it. And then came Coletta’s masterstroke. He took me to one side and said that he had been in talks with Hugh Stanley Clarke, head of A&R at EMI, and they wanted to sign me as a solo artist, but… I had to sign a new contract that day. Still in shock from the revelations, and feeling deserted, I signed. Can you believe it? Coletta even took me to EMI later that day to talk about my new and future plans.

I left 25 Newman Street a shattered thirty-year-old man, I don’t mind saying it. The greatest band any guitarist could wish for had ended without a row or whimper, and a song-writing partnership that could have gone on to bigger and better things was terminated because of lousy management.

Am I being fair here? Is it too easy to blame management for everything? But equally, is it not reasonable to suggest that our manager should have been a creative force, looked after us, and pushed us higher? It’s easy to blame John Coletta. I had no legal advice but I was the one who signed that contract. All I can say is that John Coletta was a very poor manager for me. They’re my thoughts.

Another common question: was I fired or did Whitesnake just disband?

Well, you tell me. If I was indeed fi red, then I am proud to say I was sacked at the same time as the best rock drummer in the entire world. Ian Paice just shrugged, and later joined the Gary Moore band.

Jon Lord continued to work with David Coverdale in Whitesnake, but everything else changed. Cozy Powell replaced Ian, Colin Hodgkinson replaced Neil, and Mel Galley replaced me. I did wonder if Gary Moore had ever been considered for my job, based on a mysterious encounter just before the band broke up. Gary turned up at Britannia Row, and looked a little bit ruffled when he saw me.

It seems obvious now that he was there, and was put out to see me, because he was in the frame to join Whitesnake. I’m by no means certain, but I guess it did make real sense. Maybe I should ask David some time. Moody also returned to the fold, which surprised me, but this didn’t last very long as John Sykes very soon replaced him.

I still stand by Saints & Sinners. Martin Birch returned to record David’s vocals and mix the album. Mel Galley sang backing vocals, and I never got the chance to play the songs live, but I recorded them all and wrote the most important one. The line-up for that album is the classic: Coverdale, Marsden, Moody, Murray, Lord. and Paice.

Where’s My Guitar? is available to order now.