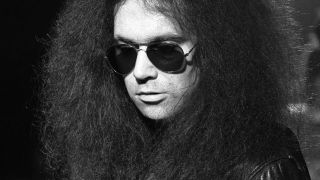 Original Motorhead guitarist Larry Wallis, who also played with bands including Pink Fairies, Blodwyn Pig and UFO, has died at the age of 70.

Wallis played on Motorhead’s On Parole album, which although released in 1979 as the band’s fourth album, was recorded in late 75/early 76 and launched on the back of the success of their first three records.

Prior to his time with Lemmy, Wallis hooked up with Steve Peregrin Took’s Shagrat and later joined Blodwyn Pig with Jack Lancaster. Wallis also toured across Europe with UFO but left the band in 1972.

Wallis joined Pink Fairies that same year and played on their 1973 album Kings Of Oblivion and was part of the band’s reunion in 1987 and appeared on the Kill ‘Em And Eat ‘Em album.

He also played with Mick Farren and The Deviants and released a solo album Death In The Guitarfternoon in 2001.

Along with his playing, Wallis also served as a producer with New Wave and punk label Stiff Records and produced Wreckless Eric’s A Louder Silence in 1977.

No cause of death has been revealed.