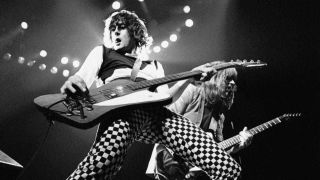 Former UFO bass player Pete Way has looked back on the recording of his band’s album No Place To Run, made during a sun-soaked two months in 1980 at AIR Studios Monserrat with George Martin, the producer of The Beatles, who died on Tuesday.

“George was a really nice guy,” he says, “and getting to make a record with him was a complete honour.”

To this end they were happy to send UFO to the small Caribbean island of Monserrat, where Martin had built a studio, having fallen in love with the place during his days in the Navy. From the label’s viewpoint its atmosphere of sophistication — and a distinct lack of bars — made the place a far less dangerous workplace than London or Los Angeles.

“Rubbish!” Way snorts. “This was UFO! If you wanted to do so, you could get so completely drunk on rum that you’d fall over.”

And that’s exactly what happened, despite the band reigning in their after-hours entertainment during working hours. And make no mistake, Martin operated to a strict timetable.

“You’d start at around 11 o’clock [am] and at six [pm] there’d be a break. A gentleman in a white jacket would bring him a gin and tonic, and we’d head into the main house for a meal,” the bassist relates. “It was all very colonial and civilised – though it didn’t stay that way when Martin retired for the evening.”

According to Way, Martin had “no problem” with alcohol being consumed in the studio, and he favoured a relaxed, friendly approach.

“Sometimes in the evening we’d all meet up at the beach, of course it was warm and bright,” he recalls. “George would go into the sea and swim for miles – he was incredibly fit.”

Although Way counted himself a fan of the Beatles his real loves were the Stones, Zeppelin and Sabbath, so he wasn’t in awe of the producer, or his trusty engineer Geoff Emerick, who’d also worked on Sgt Pepper.

“George was like one of the boys, really,” he muses. “He never threw his weight about or reminded you of his reputation. He was very interested in the way that we liked to work, because it really was an experiment on both sides of the equation. For instance, he wasn’t used to recording the backing tracks first.

“Sometimes he’d ask, ‘Is Phil [Mogg] coming in today?’ because he was used to John and Paul having their lyrics ready. George would get anxious about the [lack of] words and we’d have to placate him, ‘Oh, don’t worry, they’re done’, when we all knew very well that Phil was down at the beach waterskiing.”

For their own part, UFO were flummoxed by the quietness of Martin’s studio playbacks. “They sounded like a transistor radio,” says Pete. “After George had left, Paul Chapman and I would rachet up the volume to the point where I’m surprised the place still had a roof.”

In the end, UFO were unable to come up with the elusive hit single, Young Blood stalling at Number 36 and being tucked away at the beginning of Side Two of No Place To Run’s original vinyl edition.

“It’s not a bad album, but we found George’s mix a bit low-key,” Way considers 36 years later. “All the same, it has some really good songs and is nicely put together.”

In 1994, not referring to any band in particular, Martin told an interviewer: “I once had a flirtation with heavy metal, and I regretted it very much. It [the genre] didn’t seem to have any sense.” Martin also produced Cheap Trick’s All Shook Up, but Pete doesn’t beat about the bush.

“George was probably talking about us,” he admits. “He wasn’t used to hearing ‘la la la’ as lyrics [until the very last minute], but the thing about UFO is that we always came through with the goods. What he hadn’t expected was that we were like a stone you just couldn’t move – the way we worked was so long established. George coped with the situation, but it puzzled him.

“Perhaps we missed an opportunity,” he adds. “George’s forte was using strings and embellishments. Maybe he’d heard Lights Out or Obsession [UFO’s previous two studio albums, both of which featured additional instrumentation] and thought that he’d bought into that with us.

“That’s not to say there were any disagreements… far from it, and I’m happy to say that we got to work with somebody who had been so very important in the development of rock music.”

Currently working on an autobiography, Way is also dotting Is and crossing Ts on a solo album that’s been produced by Mike Clink and features a guest appearance from Slash. It’s due in June.