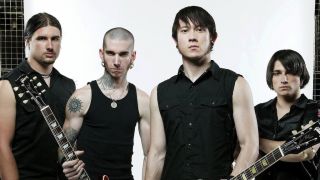 You know about Trivium’s Ascendancy. The unstoppable rise to power, the endless accolades, that Download Festival show in 2005. But before that, there was Ember To Inferno: the band’s debut record. And before that? The Red Demo, Blue Demo and Yellow Demo, all embryonic editions of the band to come. As Ember To Inferno prepares for its Ab Initio re-release comprising the original LP and demos, frontman Matt Heafy harks back to the early days.

When you were 16, you and your dad spent Saturdays meeting an attorney to discuss the music business. Fun, right?

I would’ve been more like 14 or 15, actually! My dad decided it’d be a good idea if we made a legal production company that protected the band; he was from a business background, so he knew that was the way to go.

You were committed to Trivium at such an early age. Did you ever feel like you were missing the ‘normal’ teenage stuff?

Before Trivium, I tried out for a pop-punk band; I played Dammit by Blink 182. I wasn’t a serious guitar player, I never got called back, never made it into the band. When I discovered Metallica, it showed me the style of music that I felt like I was meant to play. So I tried out for Trivium when I was 12. The singer quit within, like, two months of me joining, so I had to become the lead singer! Whenever all the band stuff was going on, it always seemed like everyone else wanted to be doing that. And all the stuff when you go nuts as a kid… we got to do that in a band, which I guess made it kinda cooler. It’s amazing, this is the only job I’ve ever had! First job, first band.

Did Travis and Brent [Smith and Young, original Trivium drummer and bassist] share that passion early on?

I think we were all in the same headspace. Travis was a senior when I was a freshman, so we only overlapped for one year when we were in school. Brent went to a different high school to all of us; those guys both graduated when I started my sophomore year, and they both worked full-time jobs while I was in the band.

At what point did you realise you had to sack off your education?

It was shortly before April 2004. I’d graduated high school early, started college early, and we got our first tour offer to support God Forbid. I asked my dad and he just said, “You can go back to school any time, I think you should do this.” So, I did!

When people rip on Trivium, they bizarrely bring up the rumour that your dad paid for everything in the early days.

He paid for the demos that we recorded locally in some guy’s garage, which would’ve been, what, $300? If 300 bucks bums people out then I only hope their parents be as supportive! It’s like when people’s parents pay for them to go to university; instead of paying for my schooling, my parents funded some demos. My Dad funded the Blue Demo, which got us signed to Lifeforce Records. It’s not as exaggerated as the story gets, but that’s how the ‘legends’ of stories go. They always get blown up and over-exaggerated.

The Blue Demo and Ember To Inferno were recorded at Audiohammer Studios. What about the other demos?

We recorded maybe 10 or 15 demos before the Blue Demo – things we did on our own, things that sounded terrible! We recorded the Red Demo for something like $200, and it was only three songs. It’s a little raw but I’m, like, 15 years old on it! That was recorded in someone’s room converted into a studio – the Blue Demo was recorded in Jason’s [Suecof, producer] garage converted into a studio. These weren’t legit, multi-million studios; these were set-ups in people’s houses. We recorded the Blue Demo in a few days and when we played shows we’d sell, like, one CD every two weeks. To a relative.

How did that get in the hands of Lifeforce Records?

That demo was given to our web designer, Fredrik Kreem – he did Ember To Inferno’s artwork and was also In Flames’ webmaster. He gave it to Jesper [Strömblad, ex-In Flames], then Jesper posed in a photo with it, which blew my mind because In Flames are one of my favourite bands, but that EP ended up with Stefan [Luedicke] who worked at Lifeforce. Stefan got in touch and signed us; Lifeforce was in its beginning stages and didn’t really have that reach, but If I Could Collapse The Masses featured on a metal magazine compilation CD, which ended up on Monte Conner’s [ex-Roadrunner Records] desk.

Do any of Ember To Inferno’s recording sessions stick out to you in particular?

When we recorded the screaming vocals, definitely. The screaming I’d been doing for 15 years up until a few years ago blew my voice out, leading me to train with a new teacher and find a new screaming technique that sounds better and more brutal. The technique I used to use just ripped my vocal cords apart by screaming as hard and loud as I could; when we were just about done with the screaming, it got so hard that I almost blacked out. I had this miserable headache and was sulking on the couch, and at that moment Jason took a picture. It’s just me looking all panicky like I was gonna die – that’s how hard I was screaming on that record.

Looking back, how do you view the demos now?

It’s almost incorrect to call these demos, because four songs from the Blue Demo got re-recorded for Ember To Inferno; I like the Blue Demo versions more and I don’t know why. We had less time to record, less budget, less everything, but at that point in time, all I did was practice. I’d go to school, come home and play guitar for four, five, six hours, and I’d jam with the band. We wouldn’t tour – we’d play like once a week – but we focussed so much on our craft, on being players, and I think it shined in the music.

With this re-release, I didn’t want to remaster or rerecord anything – I wanted to preserve it. Like, I’m a big Star Wars fan. I just wanna watch the original trilogy, unedited, without all these CGI characters walking about – that’s what it would’ve been like if we’d changed anything on Ember To Inferno or the demos. I wanted to take that snapshot in time of what these records were. It’s so cool to view Ember To Inferno as the blueprint for what we became. It’s just got this visceral, violent energy.

Trivium will reissue their debut album, Ember To Inferno on December 2.

Quiz: Do you know your metal fact from fiction?