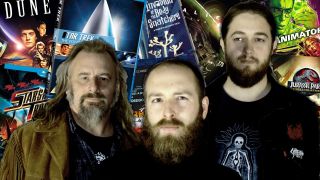 The English trio are due to release their third self-released studio album on December 6. Entitled Absurdum ad Nauseam, they delve deeper into the metallic undertones of their previous releases, promising a heavier album that still maintains the proggy 70s vibes the band is known for.

The second single to be taken off Absurdum ad Nauseam is Cromagnonaut out on Spotify now. Check out the video, premiered exclusively with Hammer below.

The video was filmed while the band were on tour in October, with the track posing philosophical questions such as the speed of humanity's evolution and the life-span of planet earth.

The band explain: "Cromagnonaut is examining the human race as being an infant species, and how stone age humans are now essentially piloting spaceships. Might we be evolving too fast for our own good? Can we spread life amongst the stars and preserve the 4.5 billions years worth of evolution before it gets wiped out? ”

The trio continue these topical concerns about our world and our own mortality – and, in particular, climate change – on the rest of their album.

Vocalist/guitarist Alex Wyld comments: "I first took climate change seriously at university in 2010: During my Astrophysics degree I opted for a course called Energy and the Environment, and during our first lecture a student asked the professors 'what are our chances like?'.

"The lecturers gave a solemn look to each other and said 'very bleak with the current state of affairs'. Everyone had a solemn feeling after that lecture and I think the state of things have gotten worse since then.

"It's tragic to see that while there's more general awareness of the crisis now, there's also more (non factual) vocal opposition to climate science and crazy talk of conspiracy theories.

"I do worry for the future, and I think that's partly why this album turned out so much heavier and more serious than our older material.

"But you have to hope that things will improve and that the people who are in power will start to actually make some policy changes to safeguard our civilisation's future."

With their feet firmly "grounded" in Hawkwind-shaped space rock, their finger on the pulse when it comes to current affairs and their head in the clouds (creatively-speaking) we couldn't think of a better band to recommend us some top-notch science fiction films...

"This has to be the top of the list. Starship Troopers has everything; romance, pulse rifles, brain bugs, Michael Ironside AND Denise Richards.

"If you haven’t seen it it's a two hour military science fiction satire by the director of Robocop.

"We have to do a song about this one."

"This film is so good we wrote a song about it. Four guys in a spaceship whose sole purpose is destroying unstable planets that could possibly support life.

"The crew is apathetic and bored of space and they’ve begun to hate each other. Its the most humanly realistic sci-fi on the list.

"Theres some amazing moments and with the exception of the extended alien beach ball scene, the whole film is fantastic and insanely quotable: 'Don't give me any of that intelligent life crap, just give me something I can blow up'.

"Lovecraft + Jeffrey Combs is a fantastic combination and I think this is the best film of its type.

"We join Herbert West trying to defy death and reanimate recently dead specimens, whilst working in a hospital and corrupting the mind and morales of his normie housemate.

"It's fantastically weird, gory and by the end of the film you feel sorry for Dr West (he's so passionate about his serum)!

"Sequels are great too, as are the other movies with the same cast (From Beyond etc)."

"Amazing movie, the extended edition gives you an extra 20mins of Newt backstory which is fun.

"Here's the super cut version of the film featuring only the dialogue of the best character: Hudson."

"Still holds up to this day in terms of story, acting and visual fx. It's so great, dinosaurs and cloning and chaos theory."

"Sean Connery (in a skimpy red outfit) kills his god in attempt to learn the truth about his existence and stumbles onto an immortal secret ruling class that use his people to grow food to keep their small society alive.

"It's mad, fun and I think it has some kind of a message inside all the madness. It's like a space fantasy version of The Wicker Man."

"Eerie and dark, a town gets invaded by, well, Body Snatchers (weird pod people). Everyone is suspicious and theres some great moments. Pretty similar to They Live in some respects (which is another great that didn’t make our list)."

"Star Wars for adults. A massive 3 hour fantasy based on Frank Herbert’s novels, directed by the madness of David Lynch.

"Mysterious space travel enabling drugs which give you blue eyes and turn you into massive worms that two rival great families war over to control the universe?

"And the soundtrack is all written by Toto. The spice must flow!

"We’ve got a song about Dune on the new album and some new Dune inspired merch, incase anyone else is mad about sand worms!"

"John Carpenter's 80s sci-fi horror masterpiece has yet to be topped for sheer claustrophobic paranoia.

"The star of the show is Rob Bottin's work creating the various practical effects for the creature, which still hold up to this day, and blow the Remake/sequel's CGI monster out of the water.

"Somehow this film takes the isolation, suspense and believable characters that made Ridley Scott's Alien so great, and twists it into something entirely more horrifying."

"Undoubtedly the best Star Trek movie. Its hell fun, cheesy and has whales.

"The OG Star Trek crew have to go back in time to 1980s Earth (before whales went extinct) to literally save the whales and teleport them back to the future to stop an alien probe destroying the planet.

"So the crew are all trekkie and trying to fit in amongst the 80s with hilarious results. Directed by Leonard Nimoy (which is why its all about saving whales) what a hero RIP."

Engineered, mixed and mastered by Sam Thredder (Slabdragger) at The Crow's Nest in London, Absurbum As Nauseam is the third studio album from Cornish pysch-rockers Cybernetic Witch Cult. Due for release on 6 December and avilable to pre-order now!View Deal