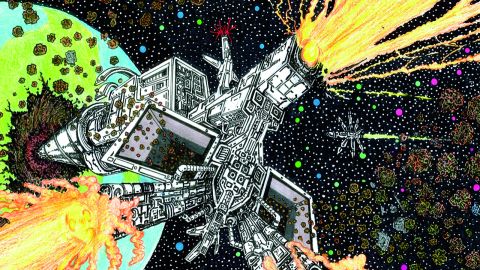 It’s been five long years since Slabdragger released their debut Regress, and during that period the Croydon riff lords were put through the proverbial mill.

However, collapsed lungs, departing drummers and “recording difficulties” can’t keep a good cosmic doom band down, so they’ve returned with monstrous stoner sci-fi odyssey Rise Of The Dawncrusher. Comprising five tracks that clock in at an hour’s worth of music, it’s a triumph. Set in the distant future and featuring gorgeous Jack Kirby-inspired cover art, it’s a speaker-shaking beast that is at times unfathomably heavy.

Evacuate! immediately leaps out from the speakers like Jimmy ‘Superfly’ Snuka and grabs the listener in a sonic headlock with its ferocious, biting riffs and screeched vocals.

Dawncrusher Rising and Mercenary Blues are epic slabs of sludge-laden metal that only get better with repeated plays, while the near-20-minute-long Implosion Rites ends their saga on a huge high with hypnotic vocals, sci-fi sounds, time changes and colossal guitars.