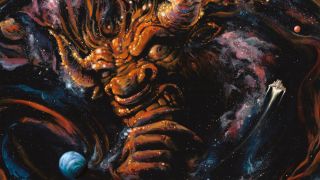 Music cannot live on music alone. The rock star who only listens to other rock and roll will be a dull and repetitious creature. You need nourishment from elsewhere to keep it fresh, from fiction, movies, science, myth, history, art or — as in the case of Monster Magnet, New Jersey’s 26-year veterans of atom-splitting out-there psychedelic rock — the one creative form that brings them all together in one potent and gloriously trashy package: the humble comic book.

Singer-writer-musical-director Dave Wyndorf’s lifelong love affair with the lurid adventures of Spider-Man, the Avengers and the rest of the Marvel stable has set his band apart from the stoner rock herd. Nobody else is likely to write songs about Thor’s world-sized enemy Ego The Living Planet, or, as can be heard on Monster Magnet’s newest release, Milking The Stars, a heads-down motorik boogie concerning magician Doctor Strange’s legion of extradimensional foes the Mindless Ones. In return comics author Grant Morrison has named characters after the Monster Magnet songs Negasonic Teenage Warhead and Superjudge.

Though he’s a devotee of the cosmic late 60s “Silver Age” and its creative holy trinity — writer Stan Lee, illustrator Steve Ditko and above all the towering cosmic visions of Fantastic Four artist Jack Kirby — Wyndorf follows comics up to the present day. He even managed a comic book store in the early 80s, Fantasy Zone in his hometown of Red Bank. “I was working in landscaping at the time,” he recalls. “I turned up, covered in filth, and said I have to work here. The money wasn’t great but I got all the free comics I could read…”

Why do comics resonate so much with you?

“When I first discovered them I could tell instantly that they were absolutely made for me. This was like 1966, picking up a Strange Tales or a Tales To Astonish or Bill Everett’s Hulk at the barber shop and thinking ‘my God, what is this?’ They were really strange and exciting and kind of exotically dour and downbeat. They were cool as shit and better than any movie — they were a whole new way of reading.

“Then the art got to me and it freaked me out that this insane shit could come out of about four people’s minds. I mean, in the late sixties all literature was on fire. Just as you saw huge differences in vibe from year to year in music, you saw the same in comics. To me the comics looked like the music sounded. I remember hearing Communication Breakdown in late ’69 and thinking ‘in my head that looks like a Jack Kirby spread!’

“So to me comics are a big bunch of nostalgia, but they’re also the last bastion of insane illustration. It’s the one place where you can see unfiltered fine illustration with a purpose other than, you know, selling some shitty product. It’s as if comics have taken over the role of albums covers — it’s great popular art that you can get lost in.”

**And they clearly set the tone for Monster Magnet. **

“I never wanted us to be a comic book band. I didn’t want to run onstage with a plastic helmet on and shout ‘Look, I’m Galactus!’ I was always equally as in love with The Stooges and The MC5 and Black Sabbath and Hawkwind as I was with comics. It was my memories of the comics of the late 60s, a nostalgia for the weirdness of it, that inspired me rather than the contemporary dark comics of the 80s.

“I used to talk to the guys in the band in overblown cosmic Jack Kirby terms. If you read enough Kirby, everything starts to look like Kirby to you. The bottom of an oil heater looks like Asgard. The band would say ‘You want us to end this song like Black Sabbath?’ and I’d say ‘No! End it like a fucking Kirby Thor story! Make it epic! Cosmic!’ And they’d be like, ‘What in the world are you talking about…?’ But to me it all went together just fine. The Marvel characters became metaphors for me because the songs are really about me, my life and my subconscious. I called one song Ego, The Living Planet to see if anyone noticed — and to my disappointment nobody did — but what an incredible vision of huge ego itself, a mad planet with a face. That’s a metaphor.”

There’s a line in your 2001 song Melt — “the world should have cried on the day Jack Kirby died” — that’s full of sadness. Is it because that innocent Silver Age of comics is gone and it’s not coming back?

“Well there was a time in the 90s when Kirby was totally forgotten, and there was a lot of pathos there. A big part of writing music for me is to build a world in my head that I can, you know, jump around in. A place for the 14-year old me. ‘Look at my posters, isn’t that cool, look at my first issue of Heavy Metal with Moëbius in it…’ That kind of thing. I’ve seen a lot of cool times since but there was a specialness to that early Kirby-Stan-Lee-Ditko world of comics that filtered into our music.

“And the best part of it was that Kirby — the most psychedelic, out of control, limitless thinker of the 1960s — was a little tiny, normal Jewish guy from Queens, with a wife and kids. A regular guy whose mind opened up beyond anyone’s dreams. I mean, this one little guy puts Ken Kesey to shame. The baby boom which created the 60s culture literally rattled everybody, old and young. The comic book guys, these WWII vets who were somewhat normal but kinda weird under the surface, took it as a get out of jail card to do whatever they wanted. And because they were straight guys with a work ethic and not drug-addled kids, their stuff was timely and absolutely on point. That is so romantic to me. It was junk culture and they didn’t earn a lot, and yet the work is magnificent.”

What comics are you reading now?

“Black Science is one ripping yarn. It hits the ground running. It’s high dimension-traveling adventure by Rick Remender and it will not let you down. He also wrote this book called Fear Agent which totally kick-ass. They’re so overlooked and some of the most beautiful books I’ve ever seen. Really great concepts, and very old school in that you get reveals every single issues. I loved his Captain America too. And Brian K Vaughan and Fiona Staples’ Saga is awesome. It really surprised me that he could switch gears from Ex Machina and do something so different. Plus I just got that huge Taschen book for Marvel’s 75th birthday and it’s calling to me from the bookshelf…”

The new track Mindless Ones arrives just in time for Marvel to announce a Doctor Strange movie starring Benedict Cumberbatch. Where did that come from?

“We had the music first with a whole lot of grunting and groaning — me yelling, really — but when one Doctor Strange character’s name came to me, Dormammu, it kinda unlocked the whole thing. I would love it if the Doctor Strange movie led to Steve Ditko being rediscovered the way that Kirby was. I’m just praying that whomever helms this thing tells their set designer: ‘DITKO’. Nobody can possibly come up with more insane, odd, inspired images and universes than Ditko could. He’s halfway between between Salvador Dalí and Joe Kubert. If they can bring that insane surrealism to life like they did with Sin City I’ll be happy. They should just go for the weird.”

The trademark Bull God who appears on most Monster Magnet record covers is almost a Marvel character himself, half man, half bull. What does the Bull God mean to you?

“The Bull God was originally a name for a band, when I was working at Fantasy Zone. It was Wrath Of The Bull God, from the cover of a Conan comic. I just thought it was funny, but when we started Monster Magnet I didn’t want to throw him out. I liked the idea of having a pagan mascot. It just sounded cool. There was a 17-year old kid hanging around the store, a penciller called Rob Leecock, and he turned my crude sketch — the Bull God, lots of drug icons, I wanted it to be as offensive as possible — into the album cover for Spine Of God. And the Bull God has been with us ever since.”

Who could win in a fight: Bull God or the Incredible Hulk?

“Well, you see the Bull God has a lot. He’s got more than I’m giving up right now. He not only has Jack Kirby energy but he also has Jim Starlin energy, which is another level of power. He’s up there with Thanos. and those guys. The Bull God is almost an infinite character. He looks mean and tough but actually he’s a lot older and wiser than he seems. He’s kind of eternal. So maybe he wouldn’t need to beat the Hulk. He could just make the Hulk cease to exist. He’s that powerful. In millennia to come, when we’re colonising other planets, many people will dig up their gardens and they’ll find Bull God statues buried there. He’s been around forever.”

Have you ever wanted to write comics yourself?

“Sometimes yeah, but I love comics so much that I don’t want to botch it. If the right thing came along I’d definitely do it and you know what, I’d be really good at it. Spoken like a true guy who doesn’t want to work [laughs]. Could I do the soundtrack for a comic book? I’d score the Galactus Trilogy. Seriously, let me at it. I’ll make that motherfucker sound like it looks.”

_Monster Magnet’s ‘Milking The Stars: a re-imagining of Last Patrol’ is out now. They tour Europe throughout February including UK dates at Rock City, Nottingham, on February 13th, Glasgow Garage on the 14th, and London’s Electric Ballroom on the 15th. _