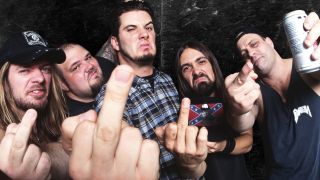 In a way, it’s apt that the memories have become faded and sometimes lost. New Orleans is used to that kind of thing, what with the 24-hour drinking and the occasional devastating storm from which its residents are forced to salvage what they can.

After all, it’s been 20 years since Down released their monumental debut album, NOLA, named after that most vibrant of cities. And while it remains a stoner rock classic – hell, a rock classic, period – it’s fair to say the band were fuelled as much by booze as by herbs, and some of the details are hazy.

“That was definitely a part of it!” laughs guitarist Pepper Keenan today. “I did more than my share of interviews from under the sheets, telling the dude to whisper because my head was ringing! I’ve forgotten more than I know!”

But it would be remiss not to celebrate the anniversary of such a brilliant work, so we spoke with three of Down’s founder members – Pepper, vocalist Philip Anselmo and drummer Jimmy Bower – to see if anything down memory lane looked familiar…

Make no mistake, it was a big deal when Down got together – a supergroup consisting of members of Pantera, Corrosion Of Conformity and Eyehategod, completed by guitarist Kirk Windstein and bassist Todd Strange of Crowbar.

To the band, however, it was just about having fun. Philip and Jimmy remember everybody discovering Melvins’ 1987 debut album, Gluey Porch Treatments, but Pepper has no such recollection. All three mention Saint Vitus, Witchfinder General and Black Sabbath as influences.

Philip: “We were all on the same trip at the same time. Around Mardi Gras time, we all took a weekend off and flew into New Orleans for one reason… Well, there were several reasons, and one of them was to party and get drunk at Mardi Gras, but also to do the Down demo. I was thinking slow-paced music, slow-tempo music, and the first thing that came into my head for a band name was Down Syndrome, but we didn’t wanna go there. Down was good enough because it seemed like a slow word, y’know?”

Pepper: “We just wanted to start a band that we’d dig if we weren’t in it! It was just weird shit, but trying to make it musical and more melodic and still have it be heavy. We all grew up together since we were kids, and we knew each other before we were in bands, so it was a very strange schoolyard kinda thing as opposed to a big conglomerate of people telling us what to do. It was just a bunch of dumb-asses drinking beer and writing music.”

Jimmy: “We all got together in 1991 in our friends’ garage, and the first day we wrote Temptation’s Wings, Losing All and Bury Me In Smoke.”

That original three-track demo is now the stuff of legend, not least because – pre-internet – the band would hand out cassettes without telling anybody who it was, encouraging fans to copy it and pass it on.

Pepper: “We’d go on tour and be like, ‘Dude, have you heard this new band?’ I made a little logo, and we stuck it in the cassette box, but we didn’t tell anybody it was us. It got way out there! I met a kid in Sweden who asked me if I’d heard of this band called Down, and he had a 20th dubbed cassette.”

Philip: “I flew out with Pantera to Italy, and we played this stage that had Danzig, Iron Maiden and Black Sabbath with Ronnie James Dio, and I ran into Chuck Billy from Testament. I thought, ‘Let me test this out.’ So we went to his bus and I was like, ‘Check this out.’ He loved it. I told him later that it was me and Pepper and the boys. I think it fooled people because everybody was so used to hearing me sing the Pantera style.”

Pepper remembers their first show as opening for GWAR, while Philip says it was opening for Eyehategod (but they’re both certain it was New Orleans during Mardi Gras, which explains a lot). Either way, the lineup didn’t stay secret for long, rapidly leading to a major deal with Elektra Records. Recording began in August 1994, at Ultrasonic Studios, and went, in typical New Orleans fashion, swimmingly.

Pepper: “There was a huge storm and everything flooded. It was like being in an aquarium in reverse, because the whole building was glass, and then it just started pouring in. I mean, it flooded! We were fucked!”

Jimmy: “We were doing Bury Me In Smoke and the electricity went out. Literally 30 minutes later we were knee-deep in water! We were stuck in the studio overnight, and they had to rebuild it all and clean it up before we could go back and finish the album.”

Philip: “After a few days, we realised we’d have to start the motherfucker from scratch. There are pictures, I don’t know who has them – if they exist after Hurricane Katrina robbed everybody of keepsakes – but there were pictures of floating tom-toms and the whole band sweating their asses off in waist-deep water! Man, it was a fucking mess! I was waiting at home because there was nothing for me to do that day until later, and my downstairs was flooding. So anyway, we had to start from scratch, and it turned out the way it did, and to this day I guess NOLA is still the staple or the favourite record of all Down fans.”

Released in 1995 on Jimmy’s birthday, September 19, and enabling him to quit his day job, NOLA stayed in the Billboard charts for six weeks, and is considered to be a landmark record. As evidenced by the fact that we’re still talking about it, it was one of those albums that you knew would be with you for life. Surprisingly, not everyone was happy about this.

Philip: “I actually got a lot of flak from our management. Like, ‘Why are you saving all these good songs for Down when you could save them for Pantera?’ Because Pantera didn’t write those songs! I didn’t even come up with the title Bury Me In Smoke! And if I’d written those songs for Pantera, they’d have been laughed out of the room! I never even presented them to Pantera. But as far as reaction went, most of it was positive and there was a lot of surprise.

“At the time it was very political, because Pepper was with a different label and whatnot, and then there was the touchiness with Pantera and what I was gonna do with this band. I think it was unjust, because Pantera was very locked in, and we were a functioning unit still, very much so. Pepper wasn’t about to leave Corrosion Of Conformity at the time, and Jimmy and Kirk were very entrenched in the New Orleans scene, so there was really no threat apart from the Abbott brothers. It was strange; they would be very guarded about who my friends were, and me having separate company to them. I don’t think they were used to it; I think they were used to keeping it close, the band first, this and that, whereas I was like, ‘We can be in a band together, fellas, but we do have our own separate lives,’ y’know? It was oddly complicated.”

Pepper: “Everybody knew that Down was just a side-project. I mean, on NOLA we only did seven shows or something, and Pantera was kicking everybody’s ass across the whole globe. Why fuck with that? We knew the record was good, but it never was one or the other. That was kind of it – we did a once-around-the-block in the US, and everybody went back to their business, but the record just kept gaining steam. It took on a life of its own without anyone doing anything. For a long time, we didn’t even do interviews, and it kind of backfired, because it made the damn thing even more mysterious! Without any press, the kids started wanting it more and more. You could cut the head off it but it wouldn’t die – it just kept fucking swimming!”

Born in a storm, NOLA keeps swimming to this day, discovered and rediscovered over two generations. People have even been buried to Bury Me In Smoke, and, in light of Philip’s personal demons and drug problems, apparently tackled so openly on the record, the lyrics have taken on significant meaning. Ironically, Philip insists that they didn’t mean anything at the time – Stone The Crow, for instance, was named after a New York bar. With time to reflect, the band are proud of the record. It captures, says Jimmy, time in New Orleans. But more than that, NOLA captures the spirit of rock music itself.

Philip: “The funny thing is, the lyrics for Down were bullshit for ever and ever. It was before all the demons and addictions came and attacked me, and I was just annunciating, so to speak. But later, when you went over what I’d written, it kind of made sense. Stone The Crow, forever [when I was singing the song], I was not saying anything during that chorus. [Then I sang] ‘I never died before,’ and I just made up the next line. It was bullshit, but in a strange way they ended up being prophetic. It makes me think twice when I write lyrics these days.”

Pepper: “Sometimes I’ll sit and play Temptation’s Wings, and I’ll be like, ‘What the fuck were we on when we wrote this thing?’ It’s not the best produced thing, it’s not the most amazing-sounding record, but it’s real. It ain’t no Pro Tools bullshit; we just rolled the tapes and went at it. If you’re into hard rock and heavy metal, it should probably be in your arsenal!”

Down are currently working on their third EP, Down IV – Part III

STUCK IN A GROOVE

Sabbath and Saint Vitus may be the most obvious influences on the riff-driven sludge of NOLA, but, according to Philip, the Melvins’ debut Gluey Porch Treatments is of equal significance. Released to little fanfare in 1987, it’s become a revered underground classic.

“The whole thing is very strange to me,” says Melvins frontman Buzz Osborne, “because there was not a lot of support for what we were doing. I’ve always viewed us as having no brother bands at all, just being alone in every way. I never wanted to belong to any club.”

They might not have belonged to a club, but their ties with Down predate the band’s formation. “We’ve known those guys for a long time,” explains Buzz, “especially Jimmy [Bower]. I think he turned Phil and the other guys on to us. We did a tour with them [in 2009], and it was one of the nicest touring experiences I’ve ever had. New Orleans has always been like an oasis in the South for us.”

How would Buzz rate NOLA? “It’s a 10!” he says immediately. “I always appreciated everything they did and why they were doing it. That might be their best record. I’ve been a fan and friend to those guys for years, and I’m glad that, 20 years later, you’re still talking about this record.”