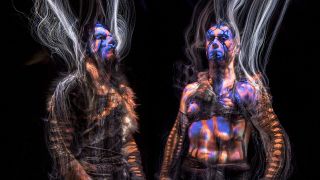 With their melancholic dirges with elements of gothic rock and black metal-shaped aural assaults, it's perhaps surprising to learn that French avant-garde doom metallers Öxxö Xööx's name means '69' in binary code, or 'make love, not war' – in a fictional language created by the band – but Öxxö Xööx have made a name for themselves by challenging perceptions and refusing to follow the status quo.

The band's first two albums, Rëvëürt (Revolt From The Heart) and Nämïdäë (The Last Tears) work together to inform a narrative – the inner monologue of band leader Laurent Lunoir as he journeys on a very personal quest to seek the "Light", an inner holy war to raise his being up and towards this entity which many other religions would refer to as God.

The latest album, Ÿ (Why), is a tale of choice and questioning and further exploration, which will be concluded in a follow up record.

Laurent explains: "Ÿ is a very symbolic album. There are several meanings regarding its name: First of all, the umlauts symbolise the duality of our material universe.

"Ÿ is a two-headed 'I', having two directions. It's the symbol of the choice between the path of light and the path of darkness, between vice and virtue. By its tree-like shape, it reflects human growth, whose branches rise to heavens.

"Ÿ symbolises the three-dimensional space (the orthonormal coordinate system x, y, z). It also depicts the corner of a cube (symbol of the earth, the stability, the hardness of the material world).

"'Y' can also depict the bifid tongue of the snake; the crossroad; the 'Y' generation; the simplified shape of the female internal genital tract, as well as the Y chromosome in the male; the Christ (Y) on the cross (T)."

Listen to the full album exclusively below:

To celebrate the release of Ÿ on November 29 via Blood Music, we caught up with Laurent to find out from such a unique and intuitively creative mind who he feels are the greatest and most "out there" avant-garde bands we should be listening to right now.

"I always thought that in a certain type of black metal, there is light - something that suffers and does not like darkness, that tries to leave the darkness. That's the case with this band, particularly of this song.

"'Ascend yourself into the eternal void. Vast darkness till the stellar sphere/Opening the world, to an era of comatose/Leave your breath, as you ascend the clouds/Subconscious travels, to the depths of space/Trapped in darkness, discovering the untold/A false sense of fear, a new sense of calm/A spark of nostalgia, hidden by ones new home/Cosmic power, solar allure, ripping you away/cosmic power, solar allure, your soul is here to stay'."

"This one is in more of a doom register, a piece that's so poignant, beautiful, and luminous. It mixes the celestial and telluric. On the tragic side, full of melancholy."

"This is a French doom group from the same region as me, where I've been for a few years. A friend of mine made this clip, and I find it quite deep.

"One feels the heaviness of material life, of societies, of civilizations which transforms us into a slave of the earth. Followed by an after taste of lost paradise."

"One of the projects of Dèhà. We're wanting to do a collaboration together, but haven't had the time yet. This is the first piece he sent me, I immediately liked the heaviness, the slowness. It reminds me of an ocean of matter, like magma made of ice."

"Another band from my region, I have a lot of respect for this group. Created in 1984, there's been a lot of technical innovation and originality in this project. They sing in Latin! This track perfectly describes the tragedy of the world in which we live, a track outside of time."

"This is the side project of Heike Langhans. A rather disturbing track for me, it symbolizes the end of something, something apocalyptic, so sad and poignant.

"But I also feel the unity found, the peace found again, a part that we had lost. The feeling of letting us reconnect with the stars, the real light, to finally leave the world and transcend this dimension."

"This is a band that I discovered while playing the Extramuralhas festival in 2018.

"Being a former fan of Nine Inch Nails (The Fragile period) I immediately liked this. It was a great experience seeing them on stage. They have big potential, in my opinion.

"It makes you want to explore this world, this tiny world in which most of us feel cramped."

"Very good friend of mine, he's like my brother, we support each other in everything we do. And we have a similar outlook that music is spiritual in its artistry.

"A very big influence for me, and I was part of the band a few years ago. I'll be working on the choruses for some of his future songs.

"Check out his 'visualbum', available on bandcamp."

"A side project of the busy mind of MBR.

"It gives the impression of an android friend of the Belmont family playing Johann Sebastian Bach.

"I have been a fan of this project for a long time.

"We quickly became friends and collaborated and made this record (very simply and fairly quickly).

"I don't remember how we met, sometimes life brings us together without us realizing it.

"I am quite proud of this collaboration.

"He's been a very big influence for me compositionally and sound-wise, so much that I invited him to add his synth guitars to the new Öxxö Xööx."