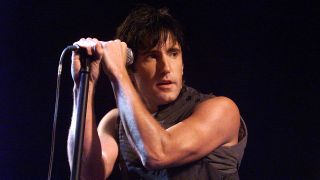 In the build-up to the release of 1999's The Fragile, Nine Inch Nails fans simply didn’t know what to expect. It would have been difficult for any album to follow the success of the band's 1994 masterpiece The Downward Spiral – a dark and deeply personal album which duly cemented vocalist, songwriter and all-round mastermind Trent Reznor's reputation as alternative rock’s new king of pain thanks to his brooding persona and habit for self-medicating heavily with heroin and cocaine.

In typical Reznor style, what followed was a complex work which relied on familiar tricks while charting entirely new ground sonically. More nuanced, but no less harrowing than its predecessor, The Fragile ran with Nine Inch Nails' burgeoning success and did everything it possibly could to try and ruin it.

A double-disc beast, The Fragile is arguably the most widespread representation of Nine Inch Nails you’ll ever get in one piece of work; Starfuckers, Inc. carries on that brief dalliance with full-on metal explored on the Broken EP, No, You Don’t is almost a Pretty Hate Machine reprise and We’re In This Together is a full-blown anthem of solidarity. There was a hint of the industrial sound from NIN's previous albums, but with The Fragile, Trent evolved his band's sound to include layers of ambient noises, pushing towards art rock as opposed to the alternate rock of the band’s previous works.

Its isolationist anthems are by turns stark and disquieting (The Great Below, La Mer) or pained and desperate (The Day The World Went Away, We’re In This Together), presenting a fractured but fascinating narrative arc.

"Reznor was using industrial music and fusing it with the great albums I grew up with in the 70s, the progressive rock and concept albums," musician Steven Wilson told us on the influence The Fragile had on him. "He was doing that in a completely contemporary way. The same kind of ambition and a very alienated perspective on the world, almost in the tradition of people like Roger Waters in his lyrical perspective. And no less ambiguous when it came to making huge monolithic statement records.

"The Fragile is really the zenith of that for Reznor. In a sense everything has been a continuation of The Downward Spiral.

Wilson added: "The scale of The Fragile is huge. He worked on the record for five years, and there’s something about it. Two hours of music that has everything from instrumental interludes and instrumental overtures to conceptual continuity and themes that would reappear in later songs. It seems to have a scale and conceptual unity that maybe the other records hint at. This, for me, was the masterpiece."

While Reznor was undoubtedly the driving force behind The Fragile's creative direction, Wilson feels the rest of the band equally deserve their dues. "It also has a lot of other musical forces; guitarist Adrian Belew is on the record, as is Mike Garson, the piano player who worked with David Bowie on Aladdin Sane," he says.

"There’s a sense he’s reaching out to other generations of musicians. I like that feeling of completing the circle in terms of using musicians from generations. Bob Ezrin, who worked on that other great concept album of the 70s, Lou Reed’s Berlin, is credited with ‘providing continuity and flow’ as well. And I definitely see The Fragile in that conceptual tradition for sure."

The Fragile represented something of a moving on for Reznor, and it wouldn't be long before Hollywood would offer another alternative escape route, with his acclaimed curation of the Natural Born Killers and Lost Highway soundtracks opening up new horizons and leading, ultimately, to Reznor winding down his band in favour of focusing upon more rarefied studio session work.

But that's not to say Reznor was totally done with making headlines by the time The Fragile rolled around – not least when the album's opening track, Somewhat Damaged, made the news when it was reported to be one of 13 songs used by the CIA at Guantanamo Bay played to detainees as a means of torture.

While The Downward Spiral may be remembered as Nine Inch Nails' defining work, The Fragile sits as its compelling, and often overlooked, companion piece, chronicling one man’s (ultimately doomed) quest to find a sense of place amid the chaos of modern life. Nine Inch Nails’ first US No.1 album, it’s a challenging and indulgent collection, but an undeniable artistic triumph.