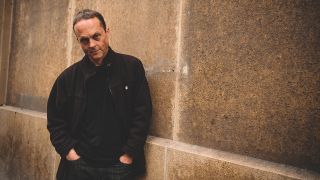 B it-part actor, care worker, astrological counsellor, occasional stand-up comedian… progressive rock musician. Tim Burness’ CV is more colourful than most, but for a man of several talents, he’s made a pretty impressive stab at the latter vocation over the years. That was initially under the guise of 80s neo-prog hopefuls Burnessence, and more recently as a less-than-prolific but beguiling and unpredictable solo artist.

Now, with his seventh studio album, Whose Dream Are You Living?, he’s produced his most incisive, immediate set of songs to date. And this time he really means business – he’s promising there’ll be a follow-up within months, rather than the decade-long gap that followed his previous long-player, 2007’s ambient-influenced Vision On.

Tim Burness looks remarkably well-preserved for a man of 56 – a winning smile, pale brown eyes and trim physique present a pretty good advert for four decades on a macrobiotic diet with the occasional marathon run thrown in. He’s full of nervous energy as he nurses a chai latte in a café near his Brighton home, and keen to explain why, for all his apparently disparate interests, “everything is interconnected”.

“The music thing for me has always been the main thing,” he says. “But I’ve had some degree of professional success and ongoing work with all those things you mention – the care work has mostly been the day job, but I’ve also acted a fair bit, did a comedy show at the Brighton fringe festival recently, and I’ve worked quite seriously as an astrological counsellor…”

He pauses to wait for my reaction, perhaps expecting a sceptical, even mocking look. I simply raise a cautiously intrigued eyebrow. Typical Virgo, probably…

“It still gets a lot of stick, but it’s a serious thing,” he says. “I’m not talking about the kind of crap you read in the daily horoscopes in the papers. This is something I’ve been heavily involved with for 30 years. And quite a few other musicians are very into it. Francis Dunnery, for instance, really knows his stuff.”

When you hear about a committed astrologer making a prog record, you mentally prepare yourself for a lavishly illustrated zodiac-themed opus full of mystical, magical musings on the stars and all who sail in them. But Whose Dream Are You Living?, originally released online last year and now out on CD, has a far earthier feel. Lyrics on tracks such as These Are The Days and Stop Them target media propaganda, austerity and avaricious business interests overshadowing current affairs (‘The short-term fix of politics/Trampling on the weak and vulnerable’), while Grass Is Greener and Cynical World seek escape from existential angst.

“If I was ever tempted to put my cape on and write a concept album based on the 12 signs of the zodiac, I would actually think, ‘No, I’m actually a bit more serious about it now. It’s too big a subject,’” says Burness.

That’s not to say he doesn’t have a pretty detailed stargazing take on the world’s current situation, one that partly informs the topical, semi-polemical nature of many lyrics on Whose Dream Are You Living?

“The big thing to consider is Pluto going into Capricorn, from 2008 to 2023,” he says. “That’s a 15-year period, which we are two‑thirds of the way through, encompassing the 2008 financial crash. Pluto is all about death and rebirth, transformation, wiping everything out and starting again. It’s about dredging up poison, buried stuff, decay and bringing it to the surface like sewage, and then we all have a look at it and by the end there’s a rebirth, like a phoenix rising from the ashes. Capricorn is all about structures, organisation, economics, politics, reality. It’s all about limitations – Capricorn is the most depressing sign of the zodiac. So it’s confronting issues around limitations – for example, global warming.”

OK, I’m struggling already, which may back up Burness’ view that it’s too complex and wide-ranging a subject to tackle within the grooves of an hour-long rock’n’roll record.

One thing that’s easier to grasp is his faintly bohemian, ecocentric take on the way the world is run right now – something touched upon amid the spectral synth washes and yearning melancholia of Dreaming Of A New World and A Space For Our Love To Grow.

“We need to address this idea that we must have economic growth, and I’m like, ‘No, you haven’t got it!’ We’ve got to have a complete about-turn on the way we think about GDP in the era of global warming.

“All these things,” he adds, “they’re all a consequence of capitalist society going bonkers, just going too far. It’s all interconnected as far as I can see. All the things I’ve done in my life are attempts to… not be a capitalist bastard, basically!”

That modest aim has driven Burness over more than four decades since the countercultural ideas and energetic rush of popular music turned his head as a kid in the 1970s, much to the dismay of his parents.

“My mum and dad were both successful classical musicians, and they were very against me getting into rock and pop, saying, ‘It’s not real music.’ But then I saw The Who at Charlton Athletic football ground [in 1976] – which broke the record for the loudest gig ever – and a few months later I saw Queen and Steve Hillage at Hyde Park, and I thought, ‘I want to do some of that – create that positive energy.’”

Burness solidified his own musical vision in the form of Burnessence in 1983, and the band soon found themselves on the fringes of the burgeoning neo-prog movement that Bucks neighbours Marillion were spearheading. With support slots for the likes of IQ and Pallas, the future looked promising.

“There seemed to be a lot of possibilities,” says Burness. “When I was growing up, Marillion were based down the road so one week I’d see them in our local village hall and six months later they were on Top Of The Pops. Then I saw Howard Jones at the same venue and six months later he’s on TOTP too.

“I had a bit of money behind me [from what he describes as “a timely inheritance”] and I thought, ‘I could do that,’ but it wasn’t that simple, of course. I produced some stuff that still holds up very well, I think, but I didn’t have enough, I dunno… fire, enough backing, enough ability, enough support to push it further.”

Burnessence remain one of neo-prog’s great couldabeens, as you may well agree if you delve into the selected tracks from their only studio album that Burness has put up on YouTube in recent years.

Sporadic releases since then have slowly built up a decent body of work for Burness, while he grappled with the less glamorous but always pressing need to make an honest living.

“I took a long time to find a job that would strike a balance between doing something worthwhile and earning money,” he says, “and in the end, becoming a care and support worker was a good compromise. I’ve done every type of care work you can do without being a qualified nurse, including three years in homeless hostels with heroin addicts, which is pretty challenging when someone is overdosing in front of you and you’ve got to make sure they get an ambulance.”

Having recently taken a break from the day job to concentrate on music, as well as contributing to a book on the astrology of progressive rock (if you want to explore the birth charts of everyone from Rick Wakeman to Kate Bush, Tim’s your man), Burness still feels that drive to contribute to society in some sort of constructive way, and that’s where the healing powers of prog come in.

‘Release the energy, setting your spirit free,’ he sings on And Set Your Spirit Free, to a spiralling backing from erstwhile Damned keyboard virtuoso Monty Oxymoron, and that sums up another part of Burness’ artistic approach.

“I believe music is a form of magic that can touch people’s souls and help people struggling with all sorts of problems,” he says. “When I was jumping up and down at the Marquee at those early Marillion gigs it was all about the range of emotions – like being on acid without the drugs! If music becomes too much of an abstract, unemotional process, it loses that spiritual element. I even got into the rave scene in the 1990s. I wasn’t into the drugs, but the consciousness-raising aspect of it was great, and the best of that stuff, The Orb and Orbital, it’s basically tarted up Tangerine Dream, with all those bouncing polyrhythms.

“Music is all about that positive energy, consciousness-raising, making me feel good and other people feel good. There’s a depressing element in there too because that’s reality, but ultimately it’s there to lift people up. And for me, the best prog has something pretty sophisticated to say about awareness, about spirituality, all the things I’ve touched on. It all connects!”

If all that sounds fairly intense, another Burness trait that sets him apart from a lot of other modern prog is a sense of humour. From the random rhymes of Grass Is Greener to the Dr Who references of What’s Going On In Your Head? (replete with Dalek backing vocals), it reflects the influence of a more playful strand of music that isn’t often heard these days.

“Julian [Tardo], who produces the album, would say, ‘You can’t put that in there – don’t you want to be taken seriously as an artist?’, and I’d say, ‘Hang on, you’re the one that dug out those Bonzo Dog albums!’ I loved the humour in stuff like Gong’s work, and there’s a lot of intelligence expressed through that kind of stuff.”

And that, ultimately, is one of the great strengths of Tim Burness’ music – all human life is here. Heartfelt and emotional soul‑baring alongside furious political ranting; profound philosophy alongside daft rhymes; and broad pop rock tunes alongside ambient soundscapes, instrumental excursions and Dalek noises. It’s the perfect advert for a man who describes himself as ‘a jack of all trades and master of none’. Have a listen, then decide for yourself whether that latter part of the phrase is strictly accurate.

Whose Dream Are You Living? is available now and is self-released. See www.timburness.com for more information.

The best of Burness

Tim Burness has recently put a number of his tracks online for your listening pleasure. This is where you should start…

Wood Being Sawn (And Other Interesting Noises) (1983)

From the only Burnessence album, this is a shivering slice of psychedelic ambience, full of head-spinning backwards, sideways and upside down electronica.

An amusing piece of tongue-in-cheek agit-punk that reflects the versatility of Burness’ songwriting and his penchant for caustic humour.

From the Infinite Ocean mini-album, this instantly infectious acoustic number showcases its composer’s ability to blend prog and pop sensibilities with equal skill.

A slow-building yet cinematic Tangerine Dream-influenced instrumental, enhanced in no small part by hammered dulcimer accompaniment.

This is a driving, anthemic rock number from Burness’ most recent long-player of original material, which neatly sums up his artistic philosophy.

The changing man: Has Steven Wilson ditched prog for pop?