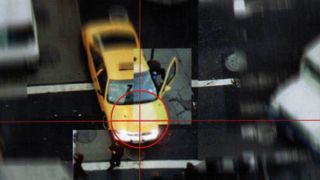 It might not seem like it to non-gamers, but there’s actually more to Grand Theft Auto than murdering, carjacking, prostitutes and killing sprees. The defining feature of every GTA game, outside of the wonderfully crafted sandbox world, is the soundtrack. The latest incarnations have hours upon hours of cutting edge music from a broad spectrum of genres, but before Rockstar had become the gaming behemoth it is today, the music was created in-house. And not all of it made the cut.

The below track, dubbed YTZ, was created by “chief noisemaker-in-residence” at Grand Theft Auto Colin Anderson. Originally, it was planned for a radio station on GTA2 called Ridiculous FM which specialised in progressive rock. However, the powers that be deemed prog too uncool and the project was shelved forever. Until now, as Metal Hammer unveils the 20-minute opus by the fictional band Aori…

We caught up with Colin (who now works as Managing Director of ‘digital toy factory’ Denki) to talk about the banned track, creating radio stations and his love of prog.

How did you get involved in writing the music for the radio stations?
“When Grand Theft Auto was in its earliest stages of development I was asked to figure out how we could do something fresh and innovative with the sound in the game. Our team was all about pushing the boundaries and doing things that nobody had done in games before, and the idea of creating radio stations playing different genres of music emerged from that process. Once I’d convinced the team to let us put radio stations in the game there was then just the small matter of making them.

“The music industry wasn’t prepared to license us any of their music at that time since no one had even heard of Grand Theft Auto, so we quickly realised there was only one choice – record a load of songs ourselves that would be good enough to convince players they were listening to actual songs by some cool bands they just hadn’t heard of yet. Once we agreed that was our aim the rest of it became a maths problem: a CD holds 74 minutes of music, 14 of those were going to be lost to the data for the game itself, which left approximately 60 minutes for music. At three minutes a track that was enough for 20 songs, and there were just three of us available to work on it. As the only guitar player of the three it was quickly apparent that I was going to have to take point on any of the songs that had a guitar focus, so I took on the rock, funk, and country stations, while the other guys focused on the more electronic genres like hip hop, dance, techno, etc.”

Where did the ideas for songs come from?
“Once we knew we needed 60 minutes of music, and agreed on the different genres of music we wanted to include, it was pretty much left to each individual on the team to come up with the best songs they could. There wasn’t much more of an idea than ‘we need 10 minutes of hip-hop music’ or ‘we need 10 minutes of rock music’. The rest was up to the musicians themselves.”

What are your favourite songs on the GTA radio stations?
“The GTA title track is still a favourite of mine because it self-references Grand Theft Auto in the lyrics, which was exactly the sort of attention-to-detail I wanted to get in there. Plus it was written really early on in the game’s development and served as a flag of intent for everyone to rally around. You have to remember, nowadays when someone plays GTAV with its hours of musical content they can’t imagine it could ever have been any other way: it wouldn’t be GTA without its radio stations, right? But when I first started working on it none of that had been figured out and there were a lot of sceptical people around who didn’t believe that radio stations playing different styles of music were either possible or even desirable in a computer game. I had to win a lot of arguments to get GTA its radio stations and that first hip hop track played a big part in convincing potential supporters and silencing the nay-sayers. Besides the title track I still have a particular soft spot for The Ballad Of Chapped Lips Calhoun because it earned us so many column inches in magazine reviews at the time for the sheer ridiculousness of including a country and western track in a computer game.”

For GTA2 you planned to have a prog station, why didn’t that make it into the game?
“I’d actually originally toyed with having a prog rock station in GTA1, just because I’m such a huge prog rock fan myself. If there was a chance to take the influence of prog rock into the realm of computer games I was definitely going to take it! But given the amount of scepticism I had to deal with about the whole radio station concept at the time, I decided I just didn’t have the energy to win the battle for a prog rock station at the same time. I still had to convince the team to let me do the radio stations first, so asking them to give me the okay to record a station’s worth of prog rock at the same time was probably going to be a step too far. So I decided to park it for the first game with the intention of revisiting it for GTA2 if the game proved popular enough to warrant a sequel. In the interim I contented myself by sneaking a few Prog Easter Eggs into the soundtrack, such as the reference to Tull’s Living In The Past in the middle section one of my funk tracks.

“When we started on GTA2 I decided to push ahead with my ambition of including a prog rock station, but after recording the first three or four minutes of music for it I decided it just wasn’t going to work. Partly from a creative perspective – the team were going ‘dark future’ for GTA2 rather than the straight ahead contemporary vibe GTA1 had – but mostly because of the amount of time it takes me to create decent quality prog. Neal Morse might be able to turn out an album’s worth in a week, but I certainly can’t! So in the end it got shelved again, mostly because of the amount of time and effort it would have taken me on top of everything else I had to do. We had even more music to write for GTA2 and less time to write it because Rockstar wanted it out in time for Christmas ’99 to capitalise on the success of the first game.”

What would the prog station have consisted of?
“The idea was to make it similar to the country music station I did for GTA1. It would only play a single track on an endless loop but the joke this time would be that the ‘single track’ was a conceptual suite of ‘70s art rock inspired music clocking in longer than any of the other stations that had four or five songs on them. But I’d have approached it exactly the same way we did all the other tracks for GTA – identify the best examples of the genre you’re trying to capture, pinpoint the particular hallmarks that define each track, and then try to recreate the essence of those in something you’ve written yourself. But anyway, there’s no need to wonder what it would have sounded like any longer because YTZ is pretty much exactly what I would have done if I’d had the time!”

How would you describe the song YTZ?
“If I was describing it in properly prog terms I guess I’d say it’s a 20-minute conceptual suite of music that explores childhood friendships from the perspective of a kid who benefits from an unexpected day off school after a heavy snowfall. However, what’s probably truer is that YTZ is what happens if you let someone who loves Tull’s Thick As A Brick, Marillion’s Script For A Jester’s Tear, Magnum’s Kingdom Of Madness, Rush’s Caress Of Steel, and Rainbow’s Rising albums loose in a recording studio without a chaperone or a sense of shame!

Is this the first instance of a song being ‘banned’ from Grand Theft Auto?
“Not quite. There was a version of the Star Spangled Banner we did for GTA1 that never made it to the final cut, as well as the unedited version of God Bless All The Universe by Rev Rooney and Rocksta Choir that had to be heavily censored before release. But I’d say it’s definitely the first song from GTA that was banned because its entire musical genre was so incredibly unfashionable at the time of its original release. I mean, in all seriousness, I’d have found it easier to get support from the team for including a jazz track, an opera track, or a West End musical number in GTA than a prog rock track!”