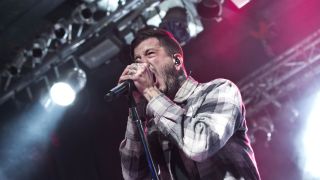 If you believe the hype, Californian quintet Of Mice & Men are a band on the brink of a breakthrough. While second album The Flood consolidated their position as one of the leaders of the metalcore pack, its successor Restoring Force is imbued with a nu metal bounce and melodic sensibility that many critics are suggesting will move them beyond their dull-as-dishwater beatdowns ’n’ fringes peers. But even a brief moment with vocalist Austin Carlile reveals that not only has he not read the script, he couldn’t give less of a fuck about it, either.

“I get confused when people talk about there being a nu metal influence on our new album,” he offers with an air of frustration rippling through his voice. “If we wanted to make an album that was nu metal then believe me, it would sound a lot more nu metal than this!”

That seems like an odd statement from the leader of a group who, while they haven’t produced another Hybrid Theory, have certainly taken on a noticeable slice of the swagger and style which characterised that time in heavy metal’s rich and diverse history.

“In my opinion we’re just not nu metal and I don’t associate ourselves with any of those other acts who seem to be trying to rejuvenate it now either. I make a point of not listening to new bands, I just focus on what we are doing,” says Austin, ramming his flag firmly into the ground. “It’s like when people say we’re a metal band. If you think we’re a proper metal band then dude, you need to listen to real music!”

Woah there a second! If the frontman of a band widely tipped to be part of the vanguard of next generation metal acts doesn’t think his band are even metal, let alone nu metal, what does he think they are?

“I hate labels,” he says. “It’s just music, we’re a hard rock band… metalcore, screamo, emo, death metal, breakcore, all this crap, I just don’t care! I listen to the stuff I want to listen to, putting labels on it is bullshit.”

Push a little further into Austin’s psyche and this almost blinkered desire to forge his own path seems to stem from two distinct things: a feverish determination to succeed and a gnawing need to have his art respected.

“I don’t think we’ve really been taken seriously up until now,” the singer begins without even a hint of hesitation. “We want to be a real band, but we haven’t been on people’s radars at that level before. They wouldn’t give us the time of day previously but suddenly they’re all excited about it. We want to be a respected heavy rock act. I don’t want to be just some kid any more.”

He acknowledges that a deal of the public’s perception of him and his band is no one’s fault but their own, the childish online bickering between members that marred OM&M’s early days seemed, for a while at least, to overshadow their musical output. It’s a phase Austin is glad to leave behind.

“This band used to revolve around drama and who-said-what bullshit but we want more than that,” he laughs. “We don’t want people to associate us with all that stuff – we want them to go, ‘Oh they’re those guys who are great live and have a kickass record!’”

The inference is that from said great live shows and kickass records the much-craved success will inevitably flow. When asked about the direction he hopes his band will take in the future, Austin speaks with a clarity and erudition that belies both his brutish appearance and youthful years.

“We have a big hand in all aspects of our business, from merch to where we’re touring and when,” he explains. “We want to build our own vision and build our career – simple as that. For example, at Reading Festival this year we are headlining the rock stage. We probably could have been on the mainstage in the early afternoon but nobody would have watched us so we decided to headline that smaller stage, make it fucking gnarly and have people go ‘Whatever they do they crush, whatever they do they pack it out.’ That is how I want our career to be solidified, by the fact that we kill everything we set our minds to. I want people to be talking about us in 20 years’ time.”

That word ‘career’ is one that comes up one that comes up a lot throughout our conversation and it is one that gives a subtle indication of the framework in which the native Floridian contemplates the trajectory of his musical endeavours. This is a young man for whom all the eggs are decidedly in one basket and who is blessed (or perhaps cursed) with a firm grasp of the big picture of where OM&M do and could fit in to the music industry. Does it come off as a little cynical and businesslike? Possibly. Are the band reaping the rewards for such unswerving focus? Undoubtedly.

“When you’re building a band, you have to think about two years down the road and how what you are making now will impact you later. This record is our City Of Evil but it’s the next one that is really going to give us the platform to get to where we want.”

Austin’s stark willingness to measure what his band are doing against Avenged Sevenfold’s monumental commercial success is certainly a barometer of his ambition, but also gives a sense of how far into the future OM&M are already looking. For them at least, this is not just about making a fun, throwaway album for people to enjoy in the here and now; this is about creating stepping stones and forging a legacy: “Avenged saw an opportunity and moved into it while making consistently great records. Look at where that took them. That’s what I see us doing.”

So how does Restoring Force mark a first step towards emulating M. Shadows and the boys?

“I think of this, more than anything, as a super-well-rounded record,” comes the enthusiastic reply. “We want to break down the walls between genres, we want someone who likes Pantera to listen to one of our songs and go, ‘OK, I dig the groove on this’ or if you went from Bizkit to Korn to Meshuggah to Lamb Of God I feel as though there are elements of this record you would like. And even if you’re into 30 Seconds To Mars or Circa Survive then you can take something from it too.”

In truth it is an album that embraces the band’s mellifluous side more warmly than ever before, new recruit Aaron Pauley’s soothing, rich timbre ably bedding in amongst the juddering bounce. Will that appeal to everyone? Perhaps not but it seems likely to consolidate rather than dissipate the band’s existing supporters as well as dragging a few more people into the fray.

Indeed, despite bassist Aaron’s recent addition there now seems to be a stability emanating from the core of OM&M that has enabled them to produce a record which, more clearly than ever before, reflects their own musical instincts.

“We took a bit of time to notice that really we don’t listen to any of that scene, Warped Tour-style stuff,” says Austin. “We got pulled into that sound because at the time we didn’t know what we wanted to be. But as things have grown we have realised that we need to start making records that we all totally enjoy listening to. We wanted to challenge ourselves and this album has given us the chance to truly find our sound.”

And whichever way you might seek to pin down or pigeonhole their development, there is little doubt that the singer’s argument in favour of constant progression is pretty watertight: “Madness is trying the same thing multiple times and expecting different results,” he says. “You’ve always got to be looking for something new.”

As well as striving for a more complete and multi-faceted affair, the band’s time on the road has made them more firmly reconsider how their music affects the dynamic between them and their crowd when they step onstage.

“On our previous albums everything has been quite linear and to-the-grid as far as rhythms and stuff like that are concerned, basically us going ‘Oh, this sounds cool’ without really a consideration of how it will translate live and the way we perform – that’s totally different now. We are trying to think of what new things someone who has seen our band maybe 10 times can get from the experience.”

Such an audience-driven style of writing is drawn, at least in part, from a deep connection with a fanbase who have both supported and nurtured them from day one.

“We know what it is like to play to people who don’t care for your music,” sighs Austin, “which is why we have such an appreciation of the fact that we do now. Ultimately, we’re on tour 300 days out of the year so we need to make sure that not only do we love these songs enough to play them night after night but also really consider what it is that our fans enjoy about our music live. We owe them that.”

It is that burgeoning army of fans who have brought OM&M to the cusp of the huge success toward which they now gaze. With venues selling out weeks and months in advance and a growing sense of adoration being cultivated across ever-broadening circles, the time feels right for the quintet to step up to the mark. It’s certainly a long way to the top, and whether or not they will be able to achieve their lofty goals and translate their metalcore roots into something with stadium-conquering capacity remains to be seen, but what is apparent is that there has rarely been a band with their eyes more firmly on the prize. Call them a nu metal revival act, call them what you will, but Austin Carlile and his four mates are laying the best of plans by carving their own path right now, and it would hard to begrudge them whatever success they find.

For more Of Mice & Men and Austin Carlile, then click on the link below.