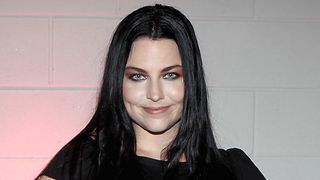 In our regular feature Thinking Out Loud, we find out what’s going on in the minds of the great and good. This week, we speak to Evanescence vocalist Amy Lee – who discusses everything from the challenge of being a woman in rock to the band’s unwanted ‘Christian metal’ tag.

“My earliest big memory of what made me go, ‘I want to be a musician, I have to be,’ was when I saw the movie Amadeus and I was completely obsessed with Mozart. I was like, nine. I wanted to be that, a composer. It wasn’t about being in a rock band, it was about making that music that made me feel so passionately.”

“I started begging for piano lessons and became obsessed with the idea of becoming a composer. I did start taking lessons and all I wanted was the classical stuff. But a couple of years later, grunge and alternative and all this amazing music started making its way to my ears and I became just as passionate about this other world of music. Nirvana was really big and had an early impact on me. Bjork, Soundgarden, Smashing Pumpkins. There was all this music that was inspiring me. And Evanescence was the product of these two extremes combining.”

“Bjork has always been my number one female artist – my favourite artist. Besides her, Tori Amos had a really big impact on me. I really liked Veruca Salt. Janis Joplin, Portishead was really big for me, I still love them. And Garbage, Shirley Manson.”

“I think Sia is amazing. I think what she’s overcome is amazing and the fact that she paved her own way and created her own style and genre and her own way to to create… is the true picture of a real artist.”

“Honestly, this is my first band. I was 13, 14 or 15 when I started writing songs and was working with Ben [Moody] who played the guitar. We didn’t have a name for it right at the beginning but we started calling it Evanescence in our teens. So this really is my first band, as weird as that is to imagine, and that’s why there’s so much old material that is really embarrassing!”

“There’s so much up-and-down. It’s not like everything was awesome and it’s not like everything sucked. But I remember when we were making the first album that there was so much back-and-forth and so much turmoil between us and the label and each other. I always had to fight to get my music made and I remember focussing more than anything on the work and on the fights and on, ‘I’m gonna make this right.’ The moment when you finally get to hear it back and enjoy it, those are shorter moments. You’re like, ‘Phew I can breathe, on to the next fire to put out.’ I’m very proud of the way that it went, but it wasn’t easy.”

“It mattered to me that we weren’t labelled a Christian band, but I am a Christian. We signed with a record label [Wind Up] whose biggest success had been Creed. And they saw that as a method, the only way they knew how to do what they did. Every step of the way they were like, ‘This is what we’re gonna do because this is what worked for Creed.’ We were like, ‘No, we’re not Creed. We don’t like that path, that’s actually not us.’ But they saw the fact that we were Christians as something they could market and that was one of the big fights that we had to fight. And eventually we won, but not without a little blood on the floor.”

“It’s hard to be a woman in the rock industry. People want to see you as the girl next door. It’s not that people don’t like you or aren’t nice to you. But they also don’t want you to tell them what to do because they actually don’t expect that you really know what to do. I haven’t had to fight for people to accept and admit that I’m a good singer. The hard part is earning people’s respect as a writer, musician and businesswoman. That’s the part where people are like, ‘Yeah, yeah. We’ll get some dude to do that part and you just stand there and look pretty.’ They don’t talk like that to your face, but it’s this natural assumption that your abilities are exactly what they would expect a woman’s abilities to be. It takes constant proving that there’s more to you and constantly having to put your foot down and fight for your rights.”

“Not only does beauty fade, but the work that it takes to make that awesome picture that they put on the cover – it’s not like I wake up that way. I think there’s enough information out there for men, women, boys and girls of what it seems like we’re supposed to look like when nobody really does, I think there’s already too much of that. I don’t really want to be a part of that. I want to focus on making great music. And I don’t think that has to fade. That’s something that’s inside and can stay with us forever.”

H.I.M. Lyrics Quiz: can you identify the song from the lines?