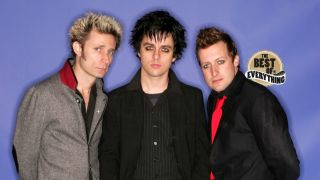 Independent filmmaker John Roecker has been part of Green Day’s inner circle for many years after seeing the band in a tiny club in Berkeley, California.

“The punk rock scene in Los Angeles made anything achievable,” says Roecker. “You could do whatever you wanted. An art revolution was happening and I couldn’t have been happier. The music scene changed to heavy metal. Sacred palaces such as the Whisky a Go-Go were now bombarded with men in spandex and lipstick just singing songs about getting laid. Years later, I left Los Angeles and went to north – and a remarkable thing happened.

“I went to a small club called The Berkeley Square and saw Green Day for the first time,” he continues. “When I saw them, I knew the revolution had returned. I met Billie Joe Armstrong and a friendship began.”

He first worked with the Green Day frontman after offering him the role of notorious cult leader Charles Manson in his stop-motion animation film *Live Freaky! Die Freaky! *(2006).

His forthcoming documentary, Heart Like A Hand Grenade is the result of spending nine months with the band in the studio as they recorded their 2004 classic, American Idiot.

Here, he chooses 11 of their best songs…

11. WHEN IT’S TIME (The Original Broadway Cast Recording “American Idiot” featuring Green Day, 2010)
“I love this song. In my film, you can see when Billie Joe plays it for the first for [producer] Rob Cavallo. It was originally going to be on American Idiot, but it didn’t make it. I was so livid, because it was such a great song and it fit. I said, ‘That has to be on the album’, but I guess I didn’t force it. I guess I had no power there!”

10. HA HA YOU’RE DEAD (Shenanigans, 2002)
“Mike Dirnt [Green Day bassist] told me that someone actually played this song at someone’s funeral, which I thought was hilarious. It’s a fun, little nasty song, and I like the humour in all that stuff. It’s very Irish – which I am. It’s like The Smiths, where it’s so dark – but you can do dark if you add humour to it, and that works for me. It’s very bratty, but that’s what punk rock is.”

9. MACY’S DAY PARADE (Warning, 2000)
“I love this song. I like the rockers, but I really love the melodies that they come up with. Some are just so gorgeous. I love this record. I always compare it to [The Beatles’ 1966 album] Revolver. I think people should relisten to that record, because it’s brilliant. It shows that they were taking chances. And that’s the sad thing about it – bands need to grow, and people sigh and go ‘Just do Dookie again’. But you can’t. It’s impossible. You can’t go back.”

8. WHEN I COME AROUND (Dookie, 1994)
“While this is a great song, it was the video they made for it that really got me. Video is a very powerful tool that can make you hate a song or love a song. And the old ones were fantastic and fun – it’s a good video!”

7. MECHANICAL MAN (Live Freaky! Die Freaky!, 2006)
“I’m going to be self-promoting here. This is a song that Billie performed for my movie Live Freaky! Die Freaky!. I’m going there! Roddy Bottum from Faith No More wrote it and Billie did it. We did it one night at the studio in Berkeley and it’s awesome. It’s hilarious. It’s a very fun, silly song, and he was taking a risk. Can you imagine going, ‘I want you to play Charles Manson in a puppet movie. It’s dirty and there’s sex and it’s X-rated.’ And Billie said, ‘Yes, that sounds like a great idea for my career!’ – and he did it.”

6. LETTERBOMB (American Idiot, 2004)
“This song used to be called Clusterbomb and it’s incredible. And I’m going to do the self-promotion thing again – when you see it played live in my film you’ll get goosebumps. It’s just that good. It’s so riveting and exciting.”

5. KING FOR A DAY (Nimrod, 1997)
“It’s such a celebration, this song. It has such joy, especially with the horns and all that. It makes me really happy when I hear it live. It’s fabulous, when he incorporates the song Shout into it. I’m telling you, watching Billie Joe perform is like seeing Judy Garland onstage. And you can quote me on that! He is a fucking performer. And he has that thing that she had, that you can’t really describe, but when he walks on that stage, it’s just like, ‘Holy ….!’

4. JESUS OF SURBURBIA (American Idiot, 2004)
“When we were listening to this song in the studio, all I could hear was the music part and not the lyrics. I had this movie called Sweet Charity that Bob Fosse directed, and there’s this thing called The Rich Man’s Frug, this great, cool ’60s-type crazy dance thing. And I woke up in the middle of the night and I brought the DVD. I go, ‘Billie, you’re going to think I’m completely out of my mind, but play the track, Jesus Of Suburbia’. I press play on the DVD and tell him to watch – it synced perfectly to it. And that’s in the film. And I think that’s the time when we thought, ‘This could be a Broadway musical’. It’s a timeless piece. The song hasn’t dated. Yes, it’s political in a way, but those events have always happened in our lifetime. We’re always going to have an evil king, we’re always going to have censorship, we’re always going to have this collapse of people forcing us to do things. That’s where punk rock comes from. And in some ways, I kind of like when a Republican gets elected, because that’s when art really excels, when you have this dictator thing saying, ‘No, you can’t do this.’ It makes it dangerous. It makes it fun again. It makes it worth it. It makes us feel like we do have a voice.”

3. BRAIN STEW/JADED (Insomiac, 1995)
“That song is just so good – it’s so dirty and so punk. I love those songs that perfectly blend together. It’s such a great guitar hook, too – it’s something you can play in your car and go ‘Fuck yeah, motherfuckers!’ And that’s definitely something you need in LA when you’re driving around.”

2. WALKING CONTRADICTION (Insomniac, 1995)
“I don’t know why I’m choosing this song. I don’t know why I like it! I’ve read some of these lists on TeamRock, like the Replacements one, and they can be so articulate about why they love a song. But I’m like, ‘I don’t know!’ One thing I like about Green Day is that it doesn’t take me more than one time to listen to a song and love it. It’s kind of like the first time you heard the Ramones – either you got it or you didn’t. It just connects. You identify with it.”

1. WHATSHERNAME (American Idiot, 2004)
“American Idiot was recorded in the order of the album. This was the last song and it brings everything together. It was a very emotional time when this song got finished. It was like, ‘This is it.’ It felt like school was out and we hopefully will see each other when summer’s over. It was sad. But you have the let the baby go. You do. You can’t be that greedy, and I remember going, ‘Okay, it belongs to them now.’ But for nine months, it was just us.”

Heart Like A Hand Grenade will be released in US cinemas next month. For more information, visit the band’s official site.