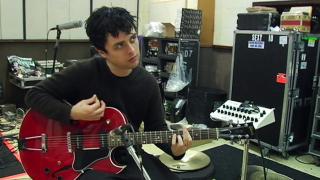 In the summer of 2003, the master tapes of Green Day’s album ‘Cigarettes And Valentines’ were stolen.

Instead of re-recording the album, the band – Billie Joe Armstrong, Mike Dirnt and Tré Cool – decided to record their follow-up to 2000’s Warning from scratch.

It was to be a concept album, a punk rock musical centred around an adolescent anti-hero called the Jesus Of Suburbia. It’s no surprise that Armstrong would eventually tackle something of this scale – he’s sported a Jesus Christ Superstar tattoo on his right arm for over two decades.

In the days leading up to the recording, Armstrong invited his friend, filmmaker John Roecker into the studio. There, he was granted access to film the band as they recorded what would be their seventh studio album, American Idiot.

Culled from over 300 hours of footage, the film will finally be given a short run in US cinemas next month. TeamRock spoke to Roecker about witnessing rock history and, after a year of posthumous documentaries – namely Kurt Cobain and Amy Winehouse – why it’s refreshing to have a film with a positive ending…

American Idiot was recorded in 2003. Why is the film only coming out now?
“The drive that had all the footage on it crashed. A lot of the tapes were lost and I’m not the most organised person in the world. I have this problem with putting things in lunch boxes and hiding them. It was like an Easter egg hunt – ‘Oh, this is a tape from the first time Billie Joe strummed American Idiot – this should be in the film! But I’m actually glad it got lost in a way, because I was able to reexamine all the footage, all 300 hours of it. I was able to look at it with brand new eyes, and it gave me the perfect opportunity to look back and really digest it. I could be thorough and not rush.”

Did any aspects of the film change after that?
“We have the live audio of the *American Idiot *show at the Henry Fonda theatre in Los Angeles. That’s the band in its prime. It was the first time they played the album and it’s just awesome.”

How did you get involved with filming this documentary. It was the first time they’d let anyone into their inner circle to do something like this.
“You have to understand that before they started recording American Idiot, Billie was in New York and we’d have these phone conversations. And Billie’s a walker. He’d just walk around the city and we would talk for hours and hours and hours and he would go, ‘Oh, I have to call you back, I’m in a really bad neighbourhood.’ We were talking about Broadway and how there’s a connection between Broadway and punk rock, where it’s very musical and it tells a story. And that’s what I thought was missing in punk and rock, that none of these albums connected, the songs didn’t connect. And he understood that, because he has a Broadway background. And a lot of people, like Tim Armstrong from Rancid and Fat Mike from NOFX, all are cut from the Broadway cloth. It’s a very important thing. So we were talking about it and talking about ideas, and he said ‘I’m going to be in LA and I’m going to start recording it,’ and I said ‘You have to film it.’ And he said ‘We can’t, because every time we do, the other guys act goofy.’ And I said ‘Just get tripods and do an Andy Warhol type thing and just press record.’ And finally he thought about it and said ‘I’m going to be in the studio on Monday, please join me’ and I got to the studio and he had a camera for me and said, ‘Happy birthday’. And I said, ‘If things get weird, I’ll bail. Because I know this film is important but the album’s much more important.’”

Did the record label have much say in what you could film?
“We did it without Warner Brothers. We did it without anyone. And when I look back at it, I’m grateful we had that idea to just go and film, and not wait for the legal stuff and permission to film. That’s how I want to inspire people. It’s a little film, just one camera and one person documenting this stuff. You don’t need a crane or a crew of 10,000 people or a Kickstarter campaign that asks for money for a documentary. That’s bullshit. No. It doesn’t cost anything.”

Two years later, Green Day were at the height of their success. That’s when you asked Billie Joe to be the voice of Charles Manson in your animated film…
“Yeah, I wanted to ruin his career. I asked him to be Charles Manson in Live Freaky! Die Freaky! and he didn’t hesitate. That’s when a lot of the quote-unquote punk rock people I asked said no. That was a kind of fun time we were having, because we were all experimenting and trying to fuck shit up a little bit and press the envelope. We had no rules whatsoever. It was the same thing with American Idiot. It wasn’t anything they had ever done before. It was just artistic combustion – we were both on such a high, like mischievous children getting away with murder.”

Over a decade later, what are your overriding thoughts about the both film and the album? Were you aware of how important the record was going to be?
“I knew it was a complete departure for the band, but we were in a bubble. We were in this shell of a recording studio, and no one knew if it was going to sink or swim. It didn’t matter. And if the album was a flop, it would still be a masterpiece, and the film would still be significant. It could be this great record that no one listened to and ruined Green Day’s career, or a great album that sold well. It didn’t matter. And that was the whole mindset of the band and Billie. He was not going to conquer the world, he just said, ‘I need to get this out.’ And that’s what I loved about it. I’m a punk guy. We’d be happy, back in the day, if a record sold 500 copies – that to us was a platinum record. You have to understand that, to me, punk rock never sold. The Ramones just got their gold record a year ago or something. It was underground. And that’s how I treated this one and I think that’s how Billie treated it, too.”

**Yet it went on to sell over 15 million copies. So when you look back at it with that success in mind, does that change anything? Does it alter the meaning of the film?
**“I’ll tell you, I was walking in Hollywood and I passed the Pantages Theater and saw a bunch of old people and they were all going to see American Idiot: The Musical. That, to me, was a really surreal experience. It was really odd because I looked and saw the parking lot where people were parking, which was a club called Rogie’s where I first saw Green Day that is now torn down, and then next to it was the Henry Fonda Theater where Green Day played American Idiot for the first time, and it’s like ‘Do these people even know?’ I think it’s cool. It’s very surreal and I’m glad I was part of it in some way. It’s a very cool thing to be around when someone’s making a masterpiece. It’s so hard to think about it in some ways, but my friend goes, ‘You have the footage of The Beatles doing Sgt Pepper,’ and I go, ‘God, you’re right.’ Because in some ways he is. It’s Sgt Pepper for a generation. I’m just glad I didn’t bump into things when I was recording, or cough or sneeze. Because I was that close. I’d be in the studio when he would be doing the acoustic parts for Wake Me Up When September Ends or Boulevard Of Broken Dreams – I was so close I had to hold my breath. I’m really proud of the film. This has been a great time for rock ’n’ roll documentaries – there’s been Nina Simone [What Happened, Miss Simone?], Elliott Smith [Heaven Adores You], Kurt Cobain [Montage Of Heck], Amy Winehouse [Amy] – but they all don’t have happy endings. This one does.”

For more information on the film, visit the band’s official site.