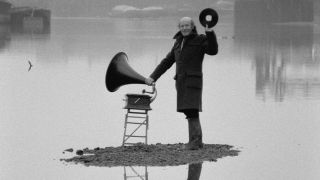 If there's anything music fans like to argue about apart from music itself, it's the stuff music is played on. It's streaming versus downloading, vinyl versus digital, elliptical styli versus the fine line variety. It never stops, and that's all part of the fun.

Here are some truths about some of the most frequently-held debates.

180 gram is a heavier grade of vinyl that many believe coaxes a richer audio palate than lighter, standard grades. Sure, 180g LPs ride more smoothly on a turntable thanks to their weight, but the benefits end there. The quality of the sound derives from the vinyl compound, as opposed to the weight of the disc.

And don’t believe anyone who tells you that 180g discs boast deeper grooves and thus a richer sound – the engineer who cuts the vinyl master determines the depth of the grooves, regardless of the weight of the vinyl.

Vinyl junkies insist that no fancy-pants digital technology can approximate the warmth of an old-school LP. They have a point: unbelievably, that black vinyl disc on your turntable actually contains more musical information than the corresponding digital copy on your laptop, simply because traditional vinyl mastering doesn’t feature any digital compression and subsequent loss of sound. But there’s a caveat – vinyl doesn’t handle extreme high and low frequencies as well as its digital counterpart. Plus the latter offers greater consistency – the beginning of a side of vinyl always sounds better than the end because its velocity increases as it approaches the centre, diminishing the ability to cleanly cover each and every micro groove. So is wax better? You’d have an easier job putting the “Beatles vs. Stones” debate to bed.

What we're told: New beats vintage when it comes to vinyl.

Decisions, decisions: should you shell out for that vintage 1980 copy of Back In Black or pick up the pristine new reissue? Well, the sound quality depends on the audio source – an LP pressed from a compressed digital audio format will never match the sonic expanse of a vinyl copy pressed from an analogue master. The Chicago Tribune recently played a bunch of Beatles fans Fabs songs from versions of the same LPs cut in the 70s, 80s and the current decade. None could say whether they were hearing a new or vintage version version of the same song.

What we're told: Singles suffer in sound compared to LPs.

In the early days of the phonograph, the standard rpm was 78 and the needle would reach the end of a disc in just five minutes. In the mid-20th century, technologies emerged that allowed records to spin at both 331⁄3 and 45rpm while retaining the same fidelity as a 78. This meant artists could release singles (45rpm) as an alternative to LPs (331/3rpm), but the acoustics and fidelity are the same for both.

What we're told: The first picture disc was a piece of Nazi propaganda.

While early picture discs emerged in the 1920s, they were for decorative purposes only. The first playable picture disc is attributed to none other than Adolf Hitler, who in 1934 released an LP of his speeches on a disc emblazoned with a Godzilla-sized picture of him rising from the middle of a crowded auditorium.