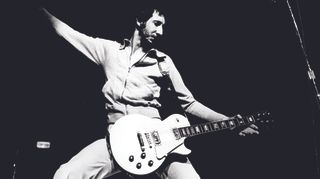 As the creative engine and windmill-armed guitarist of The Who, Pete Townshend is responsible for a ferociously ambitious amount of music, expanding its reach into concept albums and rock-opera. He’s also a fascinating alloy of the primitive and the spiritual, as liable to create an auto-destructive anthem as he is a sensitive portrayal of an artist in crisis. All of which means that his back catalogue, with and without The Who, houses some diverse and under-appreciated gems.

The pairing of Townshend and ex-Small Faces/Faces man Ronnie Lane was often a combustible one (Lane recalled the Rough Mix sessions as “quite funny. A lot of rowing…”). It was nevertheless a successful creative union, Charlie Watts providing the beat for this twangy, folk-countryish ode to “sex inside marriage when awake”.

This stray orphan had initially been worked up during the extensive Tommy tour of 1969, before being finished at the Who’s Next sessions two years later. A bare-knuckled bruiser that finds the band at full tilt, Townshend takes the middle verse from Roger Daltrey, both men giving their vocals the requisite welly.

This standout from The Who’s first studio album in 24 years (and last to date) is a delicately-wrought summation of the band’s achievements as viewed from under the lengthening shadow of time, with Townshend and Daltrey the only ones left standing. ‘This story is done / It’s getting colder now / A thousand songs.’

6. The Sea Refuses No River (All The Best Cowboys Have Chinese Eyes, 1982)

Critics and fans alike found Townshend’s dense, sometimes self-indulgent third album hard to digest, but there were moments of lovely clarity. Not least this self-admonishing nugget, which uses a watery metaphor to reaffirm his devotion to spiritual master Meher Baba. Townshend’s vocal is strident throughout, topped off by a great guitar break.

Love Reign O’er Me, Drowned and The Real Me are often cited as the jewels in The Who’s celebrated mod-opera. The Punk And The Godfather dazzles just as brightly though, Daltrey and Townshend sharing vocals on this powerful examination of the often conflicted relationship between a band and its adoring audience.

By his own admission, Townshend was boozing and drugging too much at the turn of the ‘80s, taking stock of his life and those he’d lost along the way. He poured his insecurities into his best solo effort, Empty Glass, which housed this tender and vulnerable acoustic plea for salvation.

Rescued from the rubble of Townshend’s aborted Lifehouse project, Pure And Easy instead found a home on his first solo album proper. A gorgeous thing it is too, with a soaring vocal, taut rhythm and sentiments that posit music as a vital means of communion. “The pivotal song for Lifehouse,” said Townshend. “It’s all here really.”

Arguably the least Who-like song in the band’s recorded canon, this paean to the restorative power of romantic love is as affecting and it is simple. Daltrey and Moon are absent as Townshend strums ukulele and sings lead, while John Entwistle adds discreet brass. The tune was later ably covered by Pearl Jam.

Led out by some nifty Beach Boys-style harmonies, Rael is a mini-opera (ostensibly about the Chinese communist threat in Israel) compressed into just under six minutes. Townshend’s intention to turn it into a full-length operatic work hit the buffers, though its terrific instrumental break was later revived for Sparks, from the Tommy project.