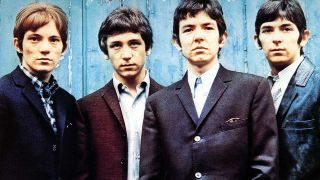 Cockney psych-rockers Small Faces are known for their kitchen sink slices of life, set to shimmering three-minute pop vignettes – so it follows that they've inspired a wealth of modern psych-botherers in their wake. Enter Hull-based quintet The Black Delta Movement, whose 60s-soaked garage rock draws more than a little inspiration from the sounds and techniques laid down by Steve Marriott and co.

To mark the upcoming release of their debut album, the band take us through the 10 Small Faces songs that inspired them the most.

"Tin Soldier taking the top spot is an absolute no brainer for me. My dad’s always said that this is one of, if not the greatest song ever written, and I couldn’t agree more. It’s perfect in every single way."

"The chorus on this song is so uplifting, Marriott’s voice and McLagen’s organ lift it so much – a masterpiece of a love song!"

"I've always thought that instrumentals are a bit of an art form for rock'n'roll bands – it’s easy to come across as self indulgent, but the way this track lifts with the strings paired with Lane’s chugging bass line is a masterclass in how to write an instrumental."

"I’ve always loved how it was recorded in Marriott’s back garden and the dog barking in the background comes in at the perfect point. Feels like a quintessential British song."

"Pure and simple rock'n'roll. I read somewhere that when they recorded this, Hendrix was recording Foxy Lady in the same studio – and nobody ever really knew who pinched whose rhythm for this. I prefer this though, hands down. The drumming on this is killer also."

"Another belter of a rock'n'roll song. Marriott’s voice and guitar work is absolutely on form – I've always wanted to play a cover of this, but I could never fill Marriott’s shoes."

"I remember my dad playing this a lot to me when I was younger. The little bike horn honking in the background always tickled me. I like that you hear them laughing in it too – it’s just a genuinely fun song, isn’t it?"

"Another example of Small Faces absolutely nailing an instrumental. Mod classic through and through!"

"Pure anthem, I challenge anyone to find something in this song that they’d change. I often play this when I’m DJing – I do remember getting unreasonably irritated at a friend for singing the chorus wrong though. He kept saying 'all my loving'!? Outrageous."

Song Of A Baker

"Lane’s voice has such a comforting sound to it. You know when someone just sounds kind? It’s a brilliant song. Whenever I think of Steve Marriott I just see the footage of them playing this on Colour Me Pop, Telecaster down to his knees giving it massive licks – I’ve always copied him on stage, I think it can be fairly obvious at times, too!"

The Black Delta Movement's debut album, Preservation, will be released on August 03 via Clubbed Thumb Records. Check out the video to new single, Butterfly, below: