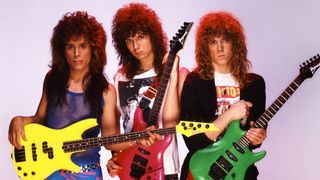 Guitar instrumentalists – possibly a more precise definition of shred guitarists – are subject to the usual parameters; some are better than others. But maybe that’s part of the problem. because when shred is bad, it’s stupendously, arse-puckeringly, teeth-grindingly terrible. Which makes a guide such as this stupendously useful.

Want someone to blame for all this? Then blame Mike Varney, founder of Shrapnel Records. A man who made it his mission in life to bring the very best guitar players to the forefront via his label. He’s still active today, and had a hand in just about all of the most notable shred releases.

The best exponents don’t play fast for the sake of it, or even simply because they can. They play fast because it’s their style, and the ability to mould the technique into music that the rock fan in the street can get into is, if anything, more of a challenge than for the next quartet of greasy herberts to appear on the scene. Shred: don’t knock it till you’ve tried it. And check this lot out for starters.

Although many would suggest that the iconic Passion & Warfare is the Vai one to go for, the Zappa-tinged Flex-Able is Vai at his purest. Featuring such gems as Salamanders In The Sun and the peak of ‘stunt guitar’ instrumentals The Attitude Song, it was no surprise that Vai was poached by David Lee Roth a couple of years later; DLR’s Eat ’Em And Smile is a shred album with vocals, after all.

A stalwart of guitar magazines ever since, Vai remains at the top of his game, producing albums that tread the line between baffling chord changes, and music laden with hooks so big you could use them to heave the Titanic up.

The Swede’s legendary in-flight ‘Unleash The Fury’ tantrum did little to dent his reputation as arguably the best guitar player to have had any sort of success in the rock world. At times he plays too fast for the human ear to follow, and that could be why he polarises the opinions of even the closest friends. Malmsteen builds his music around classical styles, most notably JS Bach and violinist Nicolo Paganini, and although most of his records come with vocals akin to a Scandinavian raider picking bones from his teeth, the excitement his playing generates is undeniable.

The band featured guitarist David T Chastain, notable for his shred technique (and also for the fact that he is now a self-made record company mogul after setting up his Leviathan label in the same year as this release). One of several bands DTC played in, this line-up featured drummer Fred Coury (soon to join the shred-free Cinderella) and female singer Leather. While side projects such as CJSS allowed Chastain (the man) to live out his jazz fantasises, Chastain (the band) were arguably the heaviest of all the artists mentioned here, enabling charred fretboards to smoulder amid decent metal tunes.

When this album hit the shelves, guitarist Paul Gilbert became an overnight star within the shred community. If the dumbed-downed music of Mötley Crüe and other Sunset Strip bands wasn’t for you, Racer X mixed hairspray with pink guitars and roaring shred to great effect.

The band managed another two albums before Gilbert went off with to form Mr Big. But their following remained such that a version of the band (including Gilbert) sporadically record and performs together to this day. If the likes of YRO don’t get you off, you must be dead or terminally shred-resistant.

This band featured not one, but two kings of shred: Marty Friedman, who went on to huge success with Megadeth, and Jason Becker who, during an outing with David Lee Roth on the Little Ain’t Enough album, was diagnosed with Lou Gehrig’s disease. Becker’s plight is made all the more harrowing when you revisit this awesome collection of tunes tinged with neo-classical flavours. He was just 17 when he recorded it.

The nine-minute title track serves up increasingly crazy guitar stunts, and it’s easy to see why Roth and Mustaine picked their respective guys.

When compared to others from the shred fraternity, the style of this amiable San Franciscan (who taught both Steve Vai and Kirk Hammett ) is more laid-back. He’s one of the more prolific, too, and even managed to fit in a spell with Deep Purple after Ritchie Blackmore jumped ship in 1993. Highlights include the title track, and the fleet-fingered Satch Boogie and Midnight, performed with two-handed fretboard tapping.

Multi-instrumentalist MacAlpine fused jazz, classical, rock and a groove so phat it caused tectonic plates to buckle into a very cool style. And it didn’t get much better than on this, backed up by an equally shred-worthy George Lynch on The Vision, while MacAlpine is almost as proficient on a keyboard as on a fretboard. He was diagnosed with colon cancer in 2015, but continues to play.

As with many other shredders, Vinnie Moore (currently plying his trade with UFO) made his name via Mike Varney’s column in Guitar Player. After a gig writing music for a Pepsi TV ad, he released this cornerstone album. Equally restrained and incendiary when required, this is one of the few albums of the period that stands up today. It’s his ear for a melody that helps set him apart from all the also-rans; UFO’s material hasn’t sounded so fresh in years.

If you find speedy shred a bit nauseating, then avoid Chris Impellitteri, who plays so fast that even in some shred circles he’s a figure of ridicule because of his advocacy of the ultra speedy left-hand hammer-on technique. Stand In Line was his first major release, but that was quickly outdone a year later by the now legendary – and unintentionally hilarious – Speed Soloing tuition video. But no matter what you think of the style, the man’s skill is without question – he’s the shredder’s shredder.

Another man whose talents were illuminated by Varney’s Spotlight column in Guitar Player magazine. Howe’s debut, mixing his bluesy style with neck-snapping rhythms, made some of the biggest waves of all, and was recorded with help from turbo-bassist Billy Sheehan. Such was the potency of the stir that Howe was asked to back up Michael Jackson on his History tour of 1996 – a gig you are not offered unless you know your way around a guitar. He has also toured with N*SYNC and Enrique Inglesias. He’s the best player you’ve never heard of.