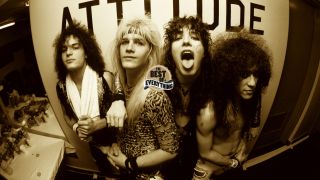 This is Lzzy from Halestorm, and one of my favourite bands ever is Cinderella. I feel like it’s mainly for nostalgic reasons. When my brother [Arejay Hale] and I started the band back in 1997 – when we first started playing shows - our parents were touting us around in our family conversion van and one of my mum’s friends gave us this VHS tape.

That was back when VHS was still a thing, and in the van there was a small TV that would only play VHS. So we had a VHS tape of the video collection of Night Songs by Cinderella, and literally every single time we got in the van to go to a gig we’d be watching this compilation of videos and live footage from this band Cinderella.

If you look at some of the early Halestorm shows – and some of that stuff has leaked onto YouTube – you’ll probably see me stealing some moves and maybe mocking my style and hair off Tom Kiefer. He was also a huge influence on me starting the guitar, and getting off the keyboards. So that’s definitely where it all began, and they’re one of those keystone bands for me.

Every time I listen to that band - and particularly that record - I kind of go back to that point in time. It was all so new to me back then. Even if we were playing to nobody at some show in the middle of Pennsylvania to about two people, it was all so exciting at that point in time, and Cinderella really reminds me of all that.

10. DON’T KNOW WHAT YOU GOT (TILL IT’S GONE) (Long Cold Winter, 1988)
The only reason I’m putting this at number 10 is because as much as I love Cinderella and as much as I love this song – and I’m a huge fan of ballads, obviously because I’m a cheeseball – every time that a commercial for like Now That’s 80s or whatever it was would come on, this song would be played over and over again – to the point where it gets stuck in your head forever. I love you Tom, and this is a great song, but it’s probably one of those songs that I don’t actually put on in my Cinderella mix. But I still love it, and that’s why it’s number 10.

9. SHELTER ME (Heartbreak Station, 1990)
This is a great song, and it was kind of a departure for them at the time as well. Again, my first introduction to Cinderella was Night Songs and that was more the centre of the ‘80s glam rock scene, but Tom was also very influenced by the blues and he started inching his way outward with this record. This song has always stood out for me, and I sing it a lot in the shower too.

8. PUSH, PUSH (Night Songs, 1986)
This is another song off Night Songs. I’m not sure if this was actually a big single for them – I think it was just an album track – but it’s just a fun, weird song. It’s funny because at the time when I was listening to it I was only like 12 or 13 years old, and I didn’t entirely get all of the sexual innuendos that were going on. But it’s been a song that I’ve been able to grow up with, ha ha! My parents were always of the opinion that if you don’t really know what it means then it’s fine – until someone has to explain it to you. They weren’t as concerned about me singing the words as maybe I might be with my kids. But then maybe I won’t, who knows…

7. SHAKE ME (Night Songs, 1986)
This was also off Night Songs, and there’s going to be a lot of songs off that album in this list. Like I said, my little brother and I would watch these videos and he was about ten at the time. He’d laugh so hard every time the keyboard player sang ‘Shake me’ in the chorus through gritted teeth, because for whatever reason he found that funny. So we’d always rewind that part and play it again, and you never forget those little things.

6. SOMEBODY SAVE ME (Night Songs, 1986)
This is a huge one for me! It’s really tough to put them all in order because I love them all so much, but this one is my to-go karaoke song. It’s funny because the last time I did karaoke we were in LA for a stint and we went to this porn star themed karaoke night. There were two ex-porn stars DJing the whole thing. I was surprised we didn’t see Ron Jeremy there actually, as he’s usually out and about with his stained sweatpants. And I don’t even care if he hears me say that – he knows it’s true. But I sang this song and somebody got it on film and posted the link to Tom Kiefer, and he was like, ‘Cool, you’re singing my song!’ So that was neat.

5. IT’S NOT ENOUGH (The Way Life Goes, 2013)
I’m going to go with one of Tom Kiefer’s new solo songs actually. This is obviously not a Cinderella song, but it’s OK to have a curveball in there at the halfway point, right? I forgot to ask about the rules. But I love this song and they rock it live so hard. It’s neat to still be a fan of somebody even after you get to know them too, and he even told me specifically that if he was still doing the Cinderella stuff that this song would’ve been on a Cinderella record – so technically it counts, ha ha!

4. HEARTBREAK STATION (Heartbreak Station, 1990)
Tom told me this story once about how this song is about how me met his now-wife. They met and there was instant chemistry but he didn’t think he was ever going to get to see her again because they didn’t get each other’s number. So he was like, ‘Well, I’ve just met the love of my life and I let her get away.’ This was obviously before mobiles and Facebook and all of that. And to me it’s cool listening to this song and knowing that story. And it obviously has a happy ending because they reconnected at a show and eventually got married. He’s a very modest fellow is Tom Kiefer. He’s not necessarily like, ‘I’m hot shit! Of course she came back.’ He was actually very surprised that she did come back and ask him out. It was almost like the stars aligned, which was cool.

3. ONCE AROUND THE RIDE (Night Songs, 1986)
This is a great song! I don’t know what it is about that riff, but I’ve been trying to master it since forever. And it’s my to-go chill out song. You know how some people listen to Enya to Zen out? Well, I have this playlist on my iTunes called ‘Rock N Roll Reliever’ - it’s full of ‘80s rock that I space out to - and this is the first song on there. The way a lot of those old records were recorded meant they just sound different, and for whatever reason I find that sound comforting. It’s like my happy place.

2. HELL ON WHEELS (Night Songs, 1986)
This is in here honestly for no reason other than I really like the song, and it rocks!

1. NIGHT SONGS (Night Songs, 1986)
Every time the intro to this song comes on I literally get taken back in time to the beginning days of Halestorm, and for some odd reason to a particular show in Pennsylvania. It was our first ever gig in a bar called the Rusty Nail, which is no longer there because this was like 15 years ago, and before we went on I was listening to Night Songs by Cinderella. The title track started out, and for some reason the intro just really got me in the zone for the show. Contrary to popular belief or however you see me on stage now, I was a very shy child. I would get butterflies and get incredibly nervous before every show, and this song became like me pre-show warm up – my Rocky theme if you will. So that’s why it will always be my number one.