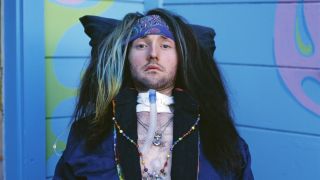 In 1990 Jason Becker was poised to fill one of the biggest pairs of shoes in rock’n’roll, replacing Steve Vai as guitarist in Dave Lee Roth’s solo band. He was diagnosed with ALS (Lou Gehrig’s Disease) just a week later, but still managed to record one album with the band before being replaced.

Ever since, despite declining health (Jason can no longer walk, talk, or play guitar), he has continued to make music. In 2012 he was the subject of a moving documentary, Jason Becker: Not Dead Yet, and has just successfully raised $75,000 in a crowd-funding campaign to release a new album.

Jason Becker communicates using his eyes, via an alphabet-oriented spelling and communication tool developed by his father. These are the 10 Records that changed his life.

Dylan in the 60s and 70s was the one who made me want to become a musician. My parents always played his albums, and his depth and attitude seeped into my soul. It wasn’t only about his touching and thought-provoking lyrics, but to me, his melodies were so beautiful. People often comment on my “heartfelt melodies,” and I think that part of my music stems from my love of Dylan. When I think about how I personally express myself with music, I harken back to Dylan, even if it is a classical piece I am working on.

I could have picked some of his other albums like Freewheelin’, Bringing It All Back Home, or Blood On The Tracks, but the song Desolation Row takes me far away, both musically and visually. Ballad Of A Thin Man was my definition of cool, along with the Fonz. I did a demo guitar cover of that song when I could still play a little. Also, can’t forget the great Like A Rolling Stone.

This album was tough to digest at first. I was about 15 years old when I dug this out of my parents’ vinyl record collection. I was constantly searching for new kinds of music to inspire me. I hadn’t heard much of these types of harmonies and rhythms. I didn’t like it at first, but I kept listening to it because I wanted to get it. One day I finally found it beautiful in a different way. My love of “odd” music started with Stravinsky. Even when composing today, I often find myself searching for a phrase or chord change that is unexpected yet satisfyingly beautiful. Actually, it isn’t about searching anymore; it has just become natural.

Marty Friedman loved Stravinsky too. We really got into the weird music, and encouraged each other to go in that direction. My songs Temple of the Absurd and Life and Death have definite nods to The Rite of Spring.

I had been playing guitar along with Clapton’s Just One Night album for a while when I was 13 or so. I loved it, but one day I needed something new. I told my mom and she got out Jeff’s Blow by Blow album. Man, his feel and those non-blues instrumentals really opened my mind to new ways of thinking. I thought, hey, if you are good enough on guitar, you don’t necessarily need a vocalist. Jeff’s other albums like Wired, Live with Jan Hammer, There and Back and Guitar Shop were probably more to my taste, but this album changed my way of thinking. I have a version of myself at 14 years old doing ‘Cause We’ve Ended as Lovers. I love many guitar players, but Jeff speaks to me the most.

All through junior high school, when kids heard me play guitar, they asked if I could tap like Eddie. I didn’t know what they were talking about. One day my dad brought home a cassette tape that he had found in the gutter; it was this album. I was excited to hear what the hubbub was about. I instantly fell in love with everything about the music, especially the guitar. I started trying to learn Eruption, like most of us guitar nerds did.

As time went by, I learned that everything about this band was incredibly special; the tunes, the groove, the feel, the vocals, the effortless swing, the tone, I could go on and on. This album made me grow as a musician as well as a player. It got me started on my journey to playing with Cacophony and then David Lee Roth. Little did I know at the time that I would be a small part of that bands’ story. What a trip.

I was 16 when Marty Friedman and his girlfriend at the time, Laurie, turned me onto this album. It had some of the cool qualities I loved about Ennio Morricone, but it was more consistently moving to my ears at the time. The chord changes brought tears to my eyes. It is wild to me how music can bring out emotions.

Marty and I got way into his arpeggios. They were kind of simple, yet very beautiful and hypnotic because of the chord changes. This album is what got me into arpeggios, along with Marty. Yngwie too of course, but I got more of my writing style with arpeggios from Philip Glass.

This movie, and especially the soundtrack, really floored me. I had heard most of Mozart’s pieces before, but all of these versions were so beautiful and heart wrenching. I wanted to write melodies like Mozart. This soundtrack inspired me to write Air, although Air sounds a bit more like Bach. To me, the music on this album contains the infinite beauty of the universe. This can be a terrible world with too much suffering, but Mozart reminds me that there is magic too.

The Band – The Last Waltz

When my folks took me to see this movie in ’78, I only knew about Dylan. It was fun discovering a bunch more great songwriters, but at the time I kept asking my mom where Dylan was. I finally shut up when Eric Clapton and Robbie Robertson traded blues solos on Further On Up The Road. I hadn’t heard this kind of extended soloing before. I thought, “now that is what I want to do!” My uncle Ron taught me the blues scale, and I spent all of my free time playing along with that whole album, especially with Clapton. I still wanted to be a singer, so I sang along as well. I sang a lot of Dylan songs in front of my elementary and junior high schools, until I taped myself. I was very disappointed in my voice, so it was good that I was learning Clapton. In one scene of Jason Becker: Not Dead Yet, director, Jesse Vile, plays a little part from that tape I recorded when I was 11 years old. Pretty cute.

When I was a junior in high school, this was my jam – ha ha! His guitar playing had so much energy and passion to me. I wanted to learn all of his techniques, but it was more than just his killer playing. I really needed to have some of his cockiness in my personality, as well as my music. I became a lot more outgoing and fun as a person. I started talking to and flirting with girls. In a way, Yngwie taught me how to be a “rock star.”

This album taught me that every kind of music could be beautiful and deep. After hearing this album, I dove into all the world music I could find. He took so much care with the rhythm sections. Don’t Give Up just killed me. I came late to this album, after Matt Bissonette and Steve Hunter kept trying to get me to check it out. Peter kind of made it okay that I couldn’t play guitar anymore. There is magic to be had even without my guitar. The melody, song, and every instrument, including voice, have something cool to express.

Ennio Morricone – The Good, The Bad and The Ugly Soundtrack

This movie and soundtrack, along with Fistful of Dollars, For a Few Dollars More, and the original Magnificent Seven soundtrack by Elmer Bernstein, have totally seeped into my composing style in a subtle way. After I finish writing something, I often play it and think, “hey, that kind of sounds like Ennio.” I am happy when that happens. I did it intentionally on one of my new songs; there will be guitar solos galore on that one.