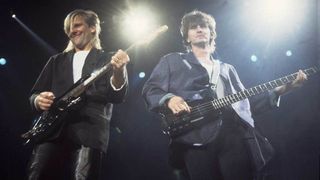 Ah, Rush in the 1980s. They began the decade as one of the biggest prog metal bands on the planet, and ended it with certain factions of their immense fanbase scratching their heads at a perceived lack of direction or over-reliance on synthesizers.

It’s worth noting that in 1980 the band were playing five nights at London’s Hammersmith Odeon on the Permanent Waves tour, yet a year later is was three nights at Wembley Arena in support of Moving Pictures. Even on their final UK appearances of the 80s — for Hold Your Fire in 1988 — they were still packing them in at three Wembley nights.

Of course, given the band kicked off the decade with the majestic Permanent Waves and followed it with the imperious Moving Pictures, it would have been easy to compile this list from those two albums alone. But in the spirit of fairness, and because the remainder of the band’s 80s output featured some stellar tunes, we’ve spread things out a little. Oh, and sorry Presto, you just weren’t magic enough…

Time has not been kind to 1987’s Hold Your Fire album. Geddy Lee once said he’d be a happy man if he never heard Tai Shan again, and Alex Lifeson’s hardly a fan either. But powerful album opener Force Ten certainly hits the right note, pipped here only by the sheer songwriting finesse of the single Time Stands Still, which remains one of the band’s most accessible songs.

It also features a fine vocal performance from US artist Aimee Mann, duetting with Lee – a first for the band. Mann also appears in the horribly dated promo video, the less said about which the better…

Many didn’t take too fondly to Grace Under Pressure when it was released in 1984, but time has proved the doubters wrong. True, it’s not on a par with the first three albums the band released in the 80s, but set against the cold war backdrop of the time, the album’s dystopian themes and sound have aged well.

It’s also a tough call to take just one song from the record, but we’ve opted for The Body Electric’s story of a humanoid’s attempts to break from the structures of its robotic society. Inspired by a Ray Bradbury story, it perfectly sums up the feel of the whole album.

1985’s Power Windows remains a big favourite of the band, hitting the right note between the use of technology and crashing power chords. Never was that more prominent than on The Big Money, a single that also perfectly encapsulated the parent album’s themes of manifestations of power.

Rolling Stone once referred to the album as the link between Yes and the Sex Pistols. But then they’ve never understood Rush, have they…

Reports that Rush guitarist Alex Lifeson was angered by the increased use of synthesizers on Signals to the detriment of the guitar have abounded for years. However there was still much of Lifeson’s skilled six-string work to be heard all over the album as the band adapted to change – something now highlighted as a prime factor in both Rush’s longevity and success.

This up tempo rocker gives plenty to appease the hardcore rockers in the band’s fanbase and saw a welcome return to the Clockwork Angels tour set list.

With the turmoil raging from 1982 to 1989 over the increased use of synthesizer’s in Rush’s music, Marathon serves as a perfect balance of both sides of the band’s character, with both Lee’s keyboards and Lifeson’s guitar taking their respective bows.

Lee’s opening bass encapsulates the rhythm of the marathon runner, and the song also serves writer Neil Peart as an allegory for life itself – keep going, tackle life’s obstacles, but don’t push yourself too hard and burn out on the way.

Just to prove they hadn’t entirely broken with the past, Rush also featured a couple of epics on Permanent Waves. The best was Jacob’s Ladder, a song inspired by the natural phenomenon of the sunlight breaking through the clouds, itself an allegory for the Biblical vision of angels seen by Jacob.

Weaving through a myriad of time signatures, the song also nods towards the band’s fondness for Led Zeppelin, and despite Geddy Lee’s assertion on the R40 tour that the song hadn’t been performed live previously, it featured in the 1981 live album Exit… Stage Left.

Red Barchetta is here primarily because it highlights Neil Peart’s abilities as a story teller, which, as the 80s dawned, were taking on a more nuanced style. Here, inspired by Richard Foster’s 1973 short story A Nice Morning Drive, he tells the tale of a forbidden drive and high-speed chase, and the “gleaming alloy air car” always evoked memories of Luke Skywalker in his landspeeder.

Barchetta, Italian for craft, also refers to two-seated vehicles in the motor world. Oh, it’s also got a killer riff.

If the first two Rush albums of the 80s showed the band becoming more streamlined in their writing, the third, 1982’s Signals, saw the band dive headfirst into the heady waters of new technology sweeping the decade. Predictably it didn’t sit too well with those hankering for Fountain Of Lamneth part two, accusing the band of sounding like The Police on the single New World Man. The pulsating synth sound that drives Subdivisions on has become a staple of the band’s live shows. The song itself returns to themes of alienation present in Moving Pictures’ Limelight.

2. The Spirit Of Radio

1980’s Permanent Waves might have been the album that signalled a shift to [some] shorter based material for the band, but in album opener The Spirit Of Radio they had a bona fide gem to kick things off.

Fired on by Alex Lifeson’s crystal clear riff, the song, inspired by hometown radio station Toronto CFNY, proved a hit on radio stations around the world, introducing the band to a whole new audience unaware of their 70s predilection for sword, sorcery and sci-fi epics. It remains the band’s most successful UK single, reaching No.13 in March 1980.

Alongside The Spirit Of Radio and Tom Swayer, one of Rush’s most memorable songs and most popular on the radio.

As every Rush fan worth their salt knows, the song deals with Peart’s increasing feelings of isolation as the band’s stature grew, encompassed in such emphatic lines like “one must put up barriers to keep oneself intact” and “I can’t pretend a stranger is a long-awaited friend”. The solo remains Alex Lifeson’s favourite to perform live.