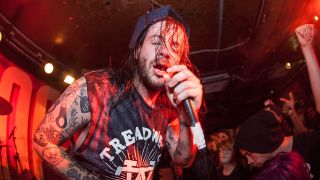 Formed in Toronto in 2004, Cancer Bats are everyone’s favourite southern-rock tinged hardcore punk band with a quasi-offensive name (and a lovely eye for fonts). The four piece outfit have released five studio albums and a smattering of Eps. Here’s their top ten best songs from the past twelve years (and no, we’re not choosing Sabotage on purpose. If we wanted a cover version, we’d use one off their Bat Sabbath EP).

Seems to make sense to start at the beginning, with what now sounds like an incredibly stripped-down hardcore track with just glimpses of the band that CB would become. It’s still bloody great though, full of rage and as great a mission statement as you could put out on your first EP. Never made it on to the debut album (only Shillelagh from the EP did). From this acorn did loud shoots burst forth.

CB’s second studio album had a trio of guest appearances, with Rise Against’s Tim McIlrath and Billy Talent’s Ben Kowalewicz chipping in with their vocals. It’s this track featuring Wade MacNeil of Alexisonfire that really stands out, with Cancer Bats tipping their hat to a band that made it possible for them to flourish.

8) Beelzebub (from Searching For Zero)

2015’s Searching For Zero might not be everyone’s favourite Cancer Bats album, but it has a few glorious departures from their normal hardcore noise. Buds sounds like Lynryd Skynyrd was formed in Washington DC in 1982, whilst the wonderful Beelzebub sounds in places like they’ve let Trent Reznor come in just to produce the one track.

7) Scared to Death (from Bears, Mayors, Scraps And Bones)

It’s probably not best to have headphones on and this turned up loud if you’re not expecting it, as the song starts by smashing you in the face and shifts seamlessly from clean and dirty vocals over guitars and drums that sound full of panic. Like most Cancer Bats songs, ideal to listen to if you somehow need to feel indestructible.

6) French Immersion (from Birthing The Giant)

“Let’s do this” screams Liam Cormier during track 2 of the blistering start to the band’s first album. Like a lot of songs on their debut (Golden Tanks, Grenades, Ghost Bust That), it just feels relentless in every way, be it the vocals that feel like military orders or the tight guitar work of Scott Middleton. It lets you know very early on that this isn’t just a hardcore punk band. There’s something very special afoot.

The best song to ever play as you stew after an argument (“if what you have is right then I’ll die being wrong”), it manages to mix that rage in with a positive message (“own your future, your happiness is what you decide”) and somehow catapult you into being in a good mood. Helps that Mike Peter’s drumming on this track is the best kind of ridiculous and Middleton’s guitar is full of unexpected flourishes.

4) Butterscotch (from Birthing The Giant)

The intro to this song – probably the closest in sounding to the original Cancer Bats EP – sounds like Bad Brains, which is never a bad thing. The slow build of the “you’re never gonna sleep again” chorus ends up being strangely catchy, even if the song title makes you wonder if they have Werther’s Originals in Canada.

Down the sludge metal route for this song, a live favourite (often played midway through Sabotage to really blow your mind) that shows the influence of Southern Rock on the band. It makes you want to buy a truck and drive through a desert, shirtless. Not a band for solos as a rule, but Scott Middleton gets to show off his skills here for sure.

2) Bricks And Mortar (from Dead Set On Living)

2012’s Dead Set On Living was said to be “more upbeat” than Bears, Mayors, Scraps and Bones and influenced by indie rock bands. Don’t worry, none of that is true and this track is as utterly evil, loud and brilliant as everything that went on albums before it. The second track on the album, the rest of the LP struggles to meet the ludicrously high standard set here. Very nearly the ultimate Cancer Bats song.

From the opening riff, to the first line of “welcome destruction with open arms”, to the mantra-like screaming of “hail destroyer”, the title track from the 2008 album is three things: One of the best opening tracks on an album, ever; among the greatest ever songs with albums titled after them, and the aggressive, holler-along introduction to a brilliant band. Once you’ve heard this and appreciate it, you get Cancer Bats.

The 10 best riffs of all time, according to Cancer Bats’ Scott Middleton

Why I Love... Black Sabbath by Liam Cormier, Cancer Bats