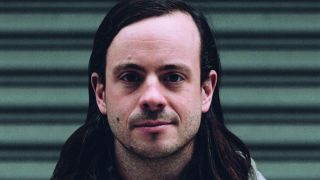 HAVE YOU EVER EMBARRASSED YOURSELF IN FRONT OF ONE OF YOUR HEROES?

“I’m trying to think. I’m not really one to regret anything. I probably said the wrong thing to Geezer Butler and looked like a goof when I met him, but in my mind I was like, ‘You’re killing it right now, Liam!’ We hung out for a minute at Download one year, and I told him that I was bummed I couldn’t see Black Sabbath. So I don’t feel like I blew it. But you never know. Ha ha!”

WHAT’S THE MOST RIDICULOUS OUTFIT YOU’VE EVER WORN ON STAGE?

“I feel pretty confident in my choices, man. There was one that was kind of funny though, and that’s maybe because it wasn’t as great as people were bigging it up to be. But on Halloween when we were on tour with Gwar I just bought some camouflage and went as an army guy, which is a pretty half-assed attempt at a costume. We were playing in Denver, Colorado, and people kept coming up to me and saying that I was Max Cavalera. They were like, ‘Dude, you came as Max Cavalera for Halloween, That’s awesome!’ And I was like, ‘No, I’m an army guy.’ Ha ha! Three or four people came up to me and said that. So I thought that was kind of funny.”

“A lot of my friends and people that I’ve known over the years have had problems with cocaine, and I definitely fucking hate cocaine. I can say that. I think it’s a fucking stupid drug that ruins people’s lives. And it’s probably the least punk drug, too. From a political point of view, doing coke is fucked up because it’s fucking over lots of other countries. It’s bad across all boards. So I would say, ‘Fuck coke! Smoke weed instead.’”

“Never for anything too serious. As a kid I got in trouble for skateboarding and doing graffiti and stuff like that – as you do – but never for anything really bad. That’s when you learn that getting caught is the worst, so get it out of your system early, kids.”

WHAT’S BEEN YOUR STRANGEST GIG?

“Let me think… I’m seeing all the trees through the forest, and I’m like, ‘They’re all crazy, man!’ Ha ha! ‘Every show we’ve ever played is the best show we’ve ever played!’ Ha ha ha! I guess the Gwar shows were probably some of the craziest: every day is Halloween for them. We were trying to egg them on to dress in business suits and wear people masks on top of their Gwar costumes, and they thought that was the funniest shit ever – but they never did it. There were a couple of middle-American moments on that tour where it felt like we were playing The Gathering Of The Juggalos [an annual festival founded by Insane Clown Posse], and there were definitely a lot of ‘juggalos’ at the shows. But the thing that was cool about that is after two seconds of being there and getting used to the fact that some of these people are wearing facepaint, you realise that they are all just normal dudes who like heavy music. So it was bizarre to begin with, but once we were in it playing we realised these people were just like the rest of us outcasts.”

WHAT IS THE BEST THING ABOUT BEING CANADIAN?

AND WHAT’S THE WORST THING?

“Fucking nothing! Ha ha ha! There’s definitely a lot of other cultures that get the piss taken out of them a lot harder, but sometimes the lazy stereotypes are a drag.”

WHAT’S THE STEREOTYPICAL VIEW OF CANADIANS, THEN?

“People just assume that you love hockey and maple syrup. But I guess there are stereotypes like that everywhere, right? Like if you’re from the UK, everyone assumes you love drinking tea. It’s funny when people ask me, though: ‘Do you like maple syrup?’ I’m like, ‘Who the fuck doesn’t like maple syrup, asshole?’ Ha ha!”

AS A FAN OF BOTH BATS AND OF BLACK SABBATH, WHAT WOULD YOU DO IF OZZY OSBOURNE CAME UP AND ASKED YOU TO BITE THE HEAD OFF A BAT?

“I would try and awkwardly pass it off to Jaye [R. Schwarzer, Cancer Bats bassist], who’d hopefully be wasted enough to do it. Jaye would do it, if he’d had enough whisky to make that bat taste awesome.”

WHAT WOULD YOU LIKE WRITTEN ON YOUR TOMBSTONE WHEN YOU DIE?

Searching For Zero is out now via Sony