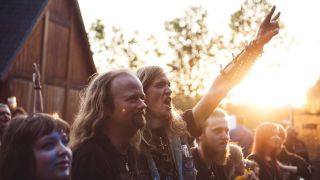 Midgardsblot, the unique metal and ancient culture festival set amongst the ancient Viking burial grounds and reconstructed Great Hall in Borreparken, Horten, Norway is back for its second year. Taking place on August 18-20 it has just announced the latest additions to the lineup.

More acts are to be announced for the intimate yet spectacular setting of the Great Hall – complete with firepit – that hosted mesmerising solo performances by Wardruna’s Einar Selvik, Enslaved’s Ivar Bjørnson and Mayhem/Sunn O)))’s Attila Csihar last year, all contributing to incomparable atmosphere of the venue.

Set in a beautiful, fjord-hugging site so full of historical and spiritual importance, Midgardsblot is about more than music, though. Alongside the bands there will be tours of the area, a Viking village, mock battles, a beer festival and Viking market, as well as documentaries, lectures, panel discussions and a games arena for archery, axe-throwing and more, all adding up to a magical experience that resonates with the very heart of metal culture and beyond.

Hotels are within walking distance, but Midgardsblot also hosts a camping area at the beaches of the Borre park, in the midst of a beautiful forest and close to the burial mounds and Viking royalty slumbering within.

To find out the full details on this unmissable event, check Midgardsblot’s Facebook page here, the official Midgardsblot website here and the events page here!