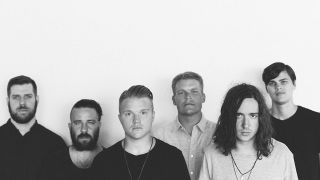 When Underoath announced plans to separate in 2012, fans were faced with a farewell tour and feared that the exhausted band would never return. Three years later, the six members reunited with recharged batteries and a new tour celebrating their two landmark albums They’re Only Chasing Safety and Define The Great Line. We caught up with vocalist and drummer Aaron Gillespie to discuss what caused the temporary departure, what the reunion means for their 19-year legacy, and their return to the UK next year.

So Aaron, what actually happened to Underoath?

“When I left in 2010, I was mentally unstable and overworking myself, plus I wanted to start a family so I had run my course with Underoath – I think that happened to the rest of the band in 2012. I know Spencer (Chamberlain, vocals) and Grant (Brandell, bass) wanted to keep going, but the rest wanted to raise families, and this job gets harder when you have kids. We were busy non-stop for 15 years because we got to a place where we stopped saying no to things, that’s not to say we hated each other or we were making shit music, but it became too much. Even bands that tour hard nowadays don’t tour as much as we did back then; we toured 24 countries in 2008 without going home once. We thought we had to keep grinding to stay relevant, but we were so fucked in our own ways that saying goodbye was the best thing we could’ve done.”

Did the band contact you when they called it a day in 2012?

“I honestly can’t remember. I think I got a phone call from someone in the band way after the decision had been made, it may even have been a casual text. If someone were to ask you when your mom told you something happened, you wouldn’t recall it. We’d known each other since high school, we’d grown up together, and all those kinds of events were just part of our lives.”

Was there any bad blood between you?

“People want to hear that someone beat someone up but that’s just not the case. I’d be lying if I said we always got along perfectly because we’ve known each other for almost 20 years, but it’s different now because we say ‘fuck you’ to each other’s faces and get it over with.”

How did the reunion come about?

“I was playing with Paramore in Manchester Arena in 2014 when Grant initiated a group text message suggesting doing one show in a tiny bar in our hometown for the 10-year anniversary of They’re Only Chasing Safety. We all agreed, so in true ambitious Underoath fashion we decided to make it into a tour. We were all so busy, so Tim suggested we wait two years so we could tag on the tenth anniversary of Define The Great Line, too. We hadn’t been true friends for a long time but a text reunited us – we still use that group text to this day.”

How did it all feel at first?

“Spencer and I were so nervous the night before the first rehearsal that we got absolutely hammered, then Grant showed up, and before we even played a note together, it felt like nothing had changed. I’d been touring non-stop since I left so that first day was musically like any other for me, but there was a palpable feeling when we started playing that was so real and we still sounded great together. We haven’t even talked about those years apart, we’re a family and we get on with life. We went to each other’s weddings, we’ve seen each other go through hardships and painful times, we’re just lucky to have each other – you can’t replace that feeling.”

What’s changed this time around?

“Everyone in the band is doing something else which has made this reincarnation of Underoath much healthier – when we’re out on the road we’re focussed on being the best live band we can be, but when we’re at home we have other things going on. We’ve learned to pace ourselves, we’re better live now than ever because we’ve decided to tour for only 3-4 months a year so we can go home for the summer, like after the UK in May 2017.”

How are fans taking it so far?

“At that first reunion show, fans got to see that we’re not just a bunch of old guys, we’ve worked hard to make sure it felt like it did back in 2006 and I think that’s what we’ve done. The first few shows were so surprising because I pictured a crowd full of old guys that came to Warped Tour, but three-quarters of the crowd had never seen Underoath and there were tons of young people there – it’s like 2006 all over again but we just got old. I think that’s why we’ve succeeded now, we have that nostalgia aspect but fans resonate with our new recharged energy. I’m thankful that the fans have stuck by us through the crazy schizophrenia of Underoath, it’s given us a new life, a new breath and a new angle on Underoath.”

Does this mean new material?

“We haven’t had that conversation yet, we’re not a band that forces things because we’re creative in our own way. Obviously, creating new material is the natural progression for a band but right now we’re interested in taking that Rebirth tour mentality around the world.”

Underoath are touring the UK in 2017 at the following dates: