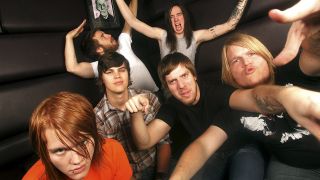 Christian metal has a misconception as being a somewhat watered down version of “true” metal. In reality, those who think that have most likely only been exposed to the evangelical bands that sprouted up in the noughties, or they simply refuse to embrace a sub-genre named after a religion. Real Christian metal however, can be just as brutal as the most secular of metal bands. In a genre that prides itself on scary practices, Christian metal is in some ways more metal than any of its other sub-genres in that it goes completely against the status quo, as well as stubbornly refusing to abandon its faith in appealing to a wider audience. These are the albums that successfully crossover to all metal audiences in terms of musical merit, while gracefully retaining their creators’ own Christian beliefs in the process.

Probably the most influential Christian metal band of all time, Stryper were one of the first metal group’s to pledge allegiance to their pious roots. Their true sound came to fruition on their Grammy-nominated third release To Hell With The Devil. The album is glam metal through and through, with a healthy dose of stadium rock singalongs thrown in for good measure. Stryper shoot for the heavens here (quite literally), producing one of the finest Christian albums of any genre in the process.

One band who have taken Christian metal to new heights are the anthemic titans Demon Hunter. It was third time lucky for the five-piece with the triple-pronged assault The Triptych, an album that launched the band onto a new platform in their career. Their fusion of metalcore and nu-metal pays dividends on songs like the atmospheric supernova Deteriorate or the pedal to the metal, riff machine Fire To My Soul – proof that these devoted soldiers of God can switch moods at the drop of a hat.

Christian metallers Underoath have no shortage of great records in their arsenal, but their finest to date sits with the emotional exploder Define The Great Line. Released ten years ago, this melodic crusher is incredibly consistent throughout its 45-minute duration, throwing all sorts of turbulent sounds at the listener, while maintaining a fine balance between gorgeous melody and roaring heaviness. Easily one of the sub-genre’s highlights.

There’s a blatant grunge influence on Precious Death’s Southpaw, with songs like the riff-heavy title track and the crooning Hello largely indebted to the hard crunch of Alice In Chains and Tad. But don’t go thinking the band are a one trick pony – that couldn’t be further from the truth. Songs like the bass-driven funk-out Shine or the slinky lounge swinger Talk About The Weather are case and point for the band’s tireless musical experiments. Unfortunately, as was the case for a lot of metal’s stellar ‘90s output, Southpaw never received enough credit upon release. In 2016, it’s about time that was amended.

Despite singer Roger Martinez flip-flopping from Christianity to Satanism to atheism over the years, at the time of Human Sacrifice, the band were very much in the lord’s camp. That’s where the niceties end, though. This album is as heavy as they come thanks to its scintillating thrash instrumentals and throat-tearing vocals. The band fight fire with fire for much of it, condemning Satan to the depths of Hell on the vicious Burn and turning their guitars into holy flamethrowers on the monstrous Mulligan Stew. Christian metal never sounded so sinister.

What’s most impressive about this soaring record is how effortlessly the band manoeuvre between expansive sounds and tight interlocking arrangements – two very different techniques that become whole in the hands of Extol. There’s a distinct Deftones influence on the record, featuring blurry atmospherics that Chino Moreno himself would be proud of. As far as great musicianship in Christian metal goes, Extol are at the top of the heap with this fantastic album.

Throw everything you thought you knew about Christian metal out the window, West Virginia’s Zao are their very own beast. On their third LP, the metalcore outfit set the foundations of the sub-genre ablaze, opting instead for frightening guitar riffs and ear-caving vocals. Talk about a baptism by fire – this record’s scorching. They may have renounced their Christian metal tag in recent years, but they rock the pulpit with severe force on this eye-opening barnburner.

How about some fantastic Christian thrash to quench your bloodthirst? Look no further than Believer, a speed metal four-piece that deliver the goods to the nth degree on the punishing Sanity Obscure. Despite the sub-genre being out of fashion upon release, you wouldn’t know it listening to this shredding LP, largely thanks to the band’s admirable efficiency. Album peaks like the anti-blasphemy Idols Of Ignorance and the operatic powerhouse Dies Irae are essential listening for any thrashhead, regardless of their faith.

Few metal records are as wonderfully experimental as Tourniquet’s 1991 release Psycho Surgery. From classically composed numbers to flamenco-flavoured instrumentals – this genre-defying troupe throw caution to the wind on more than one occasion, while always retaining a hard, thrashy backbone. The world music flourishes and bewildering rap sections set this album apart from most other metal records, never mind Christian metal. If you’re after a bonkers bending and manipulation of styles, look no further.

Not only was P.O.D.’s fourth studio album Satellite a commercial success, but it backed up its worth in musical merit too. The production on this quintessential nu-metal record is pristine, with every instrument popping from the speakers with real intent. Lyrically it’s on point, too – clearly faith-based but not in an overly preachy manner. Highlights such as Alive and The Messenjah are as crushing as they are uplifting, and as is the case for much of Satellite, they’ll be doing circles in your head long after they’ve finished.