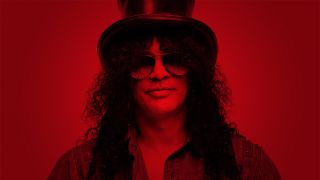 Classic Rock and Slash? We go way back.

Guns N’ Roses were the cover stars of the first issue of Classic Rock back in 1998, and have been on the cover several times since. We’ve followed Slash’s career ever since then. We were there at the beginning of Velvet Revolver AND at the end. We were backstage in Norway in 2009 when he headlined a festival with Ozzy and Fergie as guest vocalists and Ron Wood turning up to play guitar. And we released his first ever solo album (Slash, alternatively known as R’N’F’N’R) in a brand new format – the ‘fanpack’, a magazine plus official album release, available in newsagents and supermarkets with bonus collectibles (badges and posters).

It worked so well, we did the next two albums too, getting the inside stories on each one: track by tracks from all the people involved and major interviews with the man himself.All that material was only ever available in those fanpacks. Until now. Here, as an exclusive to TeamRock+ members, is the best of the fanpacks – a collection of stories from inside the world of Slash, enhanced with exclusive videos, promos, picture galleries and more. Welcome to the jungle…

The stories behind the songs