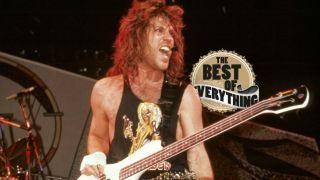 40. BRAD LOVE
Never trust anybody with the name Love, especially if he’s wearing a silk shirt, gold medallion and enough chest hair to knit a beard. Brad Love’s a pouting David Lee Roth lookalike who fronted obscure Washington rockers Aviary. Bizarrely, Love’s style was rather at odds with his appearance: his timbre is an amalgam of Freddie Mercury, Jon Anderson and Mika, and his vocals are as astonishing as they are perhaps unexpected.

39. KIP WINGER
Jon Bon Jovi’s one-time rival for sexiest man in rock, Kip Winger had the big hair, the stubble and the muscle to take him far. His band’s debut album made Kip the toast of the MTV hard rock generation, pumping out hit after hit and mesmerising his fans with his wide-eyed smile and natural bonhomie. That he could actually sing (a bold clarion-call timbre), and do it very well, was a pleasant surprise.

38. ROBERT FLEISCHMAN
Another obscure contender, Fleischman was hired by Journey only to be dumped a few short weeks later when band manager stumbled upon a tape of Steve Perry – and Journey went supernova. Fleischman quickly recovered, scoring a solo deal with Arista and joining the Vinnie Vincent Invasion, helping to record one of the world’s greatest melodic rock albums. Check out Do You Wanna Make Love, from Vinnie Vincent Invasion’s 1986 self-titled debut album. Great song, production and guitar, topped off with a masterful falsetto.

37. JIMMY BARNES
Antipodean vocal legend with a long, chequered history of misfortune that is no reflection on the quality of his voice. In 1987, he turned his attentions to the USA, recording one of the greatest AOR albums of all time, Freight Train Heart. Featuring Journey’s Jonathan Cain and Neal Schon, it was a triumph, thus securing Barnes’ place in this AOR Hall Of Fame.

Leader of 70s proto-arena rockers 1994:, a band that appeared to have it all in the palm of their hand before it all went for a Burton. Karen was – and still is – a truly gifted singer, pitch perfect and positioned somewhere between Pat Benatar and Ann Wilson. Her voice was a revelation, casting a spell over young rockers everywhere. In a perfect world, Karen would have gone on to become a huge international star, but not even connections with Aerosmith could save 1994: or Lawrence from obscurity, though she later guested on the second album by Slash’s Snakepit, 2000’s Ain’t Life Grand.

35. MICHAEL LEE SMITH
Step aside, Mr. Steven Tyler, for you are an imposter. Meet Michael Lee Smith, true heir to all that is low-slung in the world of sleazy melodic 70s rock. True, his band, Starz, weren’t exactly AOR in the purest sense, but their style was highly melodic, packing a punch to rival the likes of Ted Nugent, Aerosmith and Kiss. Although their 1977 Violation album is universally regarded as their masterpiece, they broke rank on Attention Shoppers! (released the same year), penning the sort of power pop that would give Mr. Smith the opportunity to assert his signature vocal to maximum effect. What a voice.

34. MIKE RENO
The cavorting red-leather ‘n’ headband-wearing frontman with Canada’s greatest AOR export, Loverboy, Reno’s honey-sweet vocals were first utilised in the far heavier 70s rock unit Moxy. Upon forming Loverboy with ex-Streetheart guitarist Paul Dean, the results were spectacular, their debut album earning plaudits from every conceivable corner, spawning hit singles and going double platinum in the US. Reno was in many ways the perfect frontman – energetic, communicative and possessing a signature vocal that gave every track a contemporary pop-rock edge. He rivalled the emerging skinny-tie competition without sacrificing his hard rock roots.

33. PETER CETERA
Known for his tenure with Chicago, who he remodelled into a streamlined AOR unit on hits like If You Leave Me Now and Hard Habit To Break, Cetera’s smooth, feather-light vocal was tailor-made for their soft rock. Departing for a solo career in the 80s, he scored his biggest hit with Glory Of Love, while his self-titled 1981 solo debut might be the best record that Steve Perry never recorded.

32. BOB CATLEY
Bob resembles a wayward uncle on a shoplifting spree, yet beneath his Dungeons & Dragons facade hides a sensitive soul with emotions worn on a finely embroidered sleeve. As the foil for Magnum guitarist Tony ‘The Hat’ Clarkin, Bob’s lot in life is singing about loves lost and toy soldiers, all set in the depths of Mordor. His voice has consistently improved with age, a thing of rare beauty.

31. PAUL SABU
Paul Sabu had been kicking around the LA scene for years, recording both disco and rock, and occasionally mixing both. In the mid 80s, he launched the four-piece Only Child, specialising in strong-arm power chords with lashings of melody. Sabu’s vocal prowess, courting comparisons to the likes of David Coverdale and Dave Meniketti, should’ve made him a star. Instead, Paul turned to production work with a then-unknown Shania Twain.

Listen to Angeline here, from his 1985 album Heartbreak.