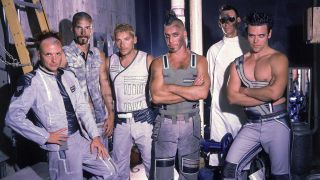 Rammstein are responsible for hours of industrial metal perfection, solemn ballads and a fair bit of pyro since their 1995 debut, Herzeleid. But, mein Gott, there are some stinkers. As we cower from the band’s flame-throwing retribution, here are 10 tracks you could happily skip.

Rammstein were finding their feet on Herzeleid, and for every fully-formed track like Du Riechst so Gut or Asche Zu Asche, there’s songs like Heirate Mich. The track’s deathly, mid-tempo rumble is ambitious enough but something Rammstein would perfect on stuff like Mein Teil, while the solo’s galloping rhythm section is a disjointed Iron Maiden, almost. The vocal phaser at the end is pants, too.

“Und niemand hört dich schreien SCHREEEEIIIIIIEEEEEEN! STEEEEEEEEEIN! UM STEEEEIN!” Maybe Till Lindemann stubbed his toe in the studio. Maybe he lost a bidding war on eBay. Whatever it was, it made Stein Um Stein’s second verse/chorus transition unintentionally hilarious; Reise, Reise is already heavy on slow ones, so Stein um Stein pulled the short straw. The guitar solo is good, mind.

Okay, the “Es kommt zu euch!” post-chorus shenanigans are wonderful, as are Christoph ‘Doom’ Schneider double bass dabblings. But the song’s major key setting is a bit off-kilter, especially when that mid-section could’ve slid into Stewart Copeland’s Spyro soundtracks. Not to say Rammstein can’t sound ace in a major key, though – Zwitter does so on 2001’s Mutter.

Right, so Feuer und Wasser kicks right off once we get to the chorus but Christ, the build-up is a bloody slog and a half. Shave off the first two minutes and this would serve as an admirable Reise, Reise bonus track; as it stands, Feuer und Wasser’s meandering introduction undermines what it eventually builds to.

As we mentioned with Heirate Mich, Rammstein went through a few growing pains. Seeman isn’t exactly Ohne dich or Frühling in Paris, Lindemann’s tender vocal counteracted with bursts of icy, tremolo-picked guitar. It’s okay, but Seeman is very much Rammstein testing the waters.

Sandwiched between Liebe ist für alle da’s title track and the whimsically whistled Roter Sand, poor Mehr doesn’t cut the condiment. Lindemann’s vocals through the verses are enthusiastic as per, but the charm is lost through the standard gang-vocal chorus; Richard Z. Kruspe and Paul Landers have played variations on that riff a million times. Mehr is, overall, a bit meh.

So yeah, Rosenrot takes a hit over its final third, Hilf Mir being the catalyst. It’s one of those brooding, slow-burning affairs that aims at the lofty heights of Reise, Reise’s title track but falls short, save for the wonderfully placed piano during its climax.

The subtle acoustics of Ein Lied put a bullet in Rosenrot, its only memorable melody taking the form of Christian ‘Flake’ Lorenz’s hammy, Treehouse of Horror keys. Rammstein have penned some fantastic, mournful ballads, and while Ein Lied grants Rosenrot an experimental fade-out, it lacks impact.

While Sehnsucht is brimming with hits, Alter Mann is the sole track you could probably do without. Flake does those atmospherics justice on Spiel Mit Mir and his bastardised breakbeat keys fare better though Eifersucht, while Lindemann’s booming melodies just don’t quite elevate this downtrodden, ploddy dirge above average.

An ode to the band’s Hispanic fans, Te Quiero Puta! is trope-laden and the closest Rammstein have ever come to novelty; Pussy and Amerika were both barbed, sarcastic put-downs whereas this is just, well, a bit silly. The mariachi/metal combo is jarring and while Rosenrot has other flaws, they’re nothing on this.