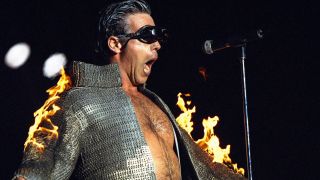 On June 10, Rammstein will bring the first day of Download 2016 to a thunderous – and explosive – close.

While the band concentrate on the follow-up to their 2009 album, Liebe ist für alle da, there’s also other matters to attend to in the run up to Donington. Very hot, very dangerous matters.

Rammstein have long prided themselves on their stage show, a sort of hellish version of Cirque du Soleil, soundtracked by an industrial stomp. And, if you’ve seen the amount of trucks backstage, they like pyro and a lot of it. A council-funded Bonfire Night display this ain’t.

“You have to understand that 99 per cent of the people don’t understand the lyrics, so you have to come up with something to keep the drama in the show,” says guitarist Richard Kruspe. “We have to do something. We like to have a show; we like to play with fire. We do laugh about it; we have fun, but we’re not Spinal Tap.”

But it almost was in 1996. During a show at Berlin’s Treptow Arena, a burning prop fell from the ceiling onto the front of the stage. Although no-one was injured, the band quickly sought the services of special effects team FFP, with whom they’ve worked ever since. They’re the team responsible for the spectacular bursts of flame and stage explosions – and keeping the band, crew and audience completely safe in the process.

While we can’t picture David St. Hubbins going to the trouble of becoming a qualified pyrotechnician in order to execute the many stunts on stage, Till Lindemann has. You don’t choose to wear a flame-proof coat and sing onstage engulfed in flames, and simply see how it goes. That’s where FFP come in.

Everything from his hot coat (Rammstein), guitar flamethrowers, boot pyro (Weisses Fleisch), rockets (Du Riechst so Gut) to a bow which shoots fireworks have been devised, sourced or built from scratch by this Berlin-based team.

We spoke to FFP’s Managing Director Nicolai Sabottka about the secret of creating a Rammstein show that lives long in the memory. So how do you get into a career which involves turning a metal gig into a scene worthy of Hollywood director Michael Bay?

“I worked as their production manager and moved into pyro over the years,” says Nicolai. “I did several training courses at Dresden’s famous school of explosives. I have licences for stage-close proximity pyro, aerial displays, manufacturing of pyrotechnics, SFX for movies and TV, as well as extensive training on various flame effect devices.”

It’s not as simple as buying a few fireworks and planning when to set them off during the show, then.

“My job is to work on new FX and search the market for anything exciting,” he says. “If we can’t find what we want, we have a team of engineers who work on special effects and an entire pyrotechnics factory in the state of Montana who will build what we’re looking for.”

Nicolai says that the pyro aspect of Rammstein’s stage show is very much a collaborative effort between the band and his team.

“I usually present what’s new to the band during pre-production and let them get carried away with ideas,” he explains. “Then we make sure what can be achieved in a secure way and start testing shortly after.”

And like a band practices for a large-scale tour, FFP’s facility in Berlin includes a full–scale rehearsal studio.

“That makes things very convenient,” says Nicolai. “Every new stunt is very ambitious at the time we develop it. I’d say all the body burns, flames and pyrotechnics attached to performers are the most thrilling.”

So, have you had any serious accidents in the 18 years you’ve worked with the band?

“No – we do excessive out and indoor testing,” he says. See? Told you they were professional. So when you see Till firing rockets into the ceiling with that massive bow and arrow, you can be assured that the physics of the trajectory or anything that might cause some damage will have been rigorously tested by people with clipboards before it goes anywhere near the public.

But what’s it like to work for the company that basically gets paid to set fire to a man? Do you try to find new ways to transform to a 6’3 man into a bellowing Teutonic tower of flame?

“We actually haven’t set fire to him for the past couple tours, but we’ve been developing new ways of attaching flames to him,” he says. “We’re currently working on more ideas.”

But we want to know how many explosions we can expect next summer. 50? 100?

“The list is long and the new show design is still at a very early stage,” says Nicolai. “We have a lot of new stuff that needs to be orchestrated, so I can’t be specific at this point as it’s simply too early to reveal. There’s lots I’d like to do, but I wouldn’t want to give that away before we’re ready to show it to the audience!”

Well, whatever is in the works with Rammstein and their pyro team, you have eight months to prepare your brain and retinas for one of the greatest shows on earth.

Rammstein headline the Friday night of next year’s Download festival, taking place on on June 10 to 12 at Donington Park, Leicestershire. Tickets go on sale at 9am on October 23 at the official festival website.