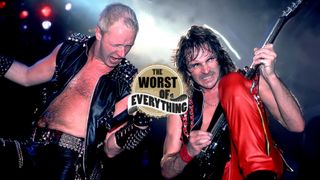 British legends Judas Priest have been metal standard-bearers for over 45 years and have recorded dozens of solid gold classics. But that doesn’t mean they’ve not committed any musical crimes…

Not a rank bad tune in and of itself, but does anyone need Judas Priest trying to ‘do a Marilyn Manson’? 2001’s Demolition was the second album to feature vocalist Tim ‘Ripper’ Owens, who replaced Rob Halford in 1996. Its lack of success suggested traditional Priest fans had precious little time for the more modern vocal inflections and semi-industrial musical tones you hear here.

You can forgive this one to a certain extent. The title track of Priest’s debut album came out in 1974 when the band were clearly feeling their way. But the opening riff is super-hokey and the whole thing sounds timid and forced. When Halford sings ‘Rocka rolla woman for a rocka rolla man’ it’s pretty clear why…

1976’s Sad Wings Of Destiny is hailed by hardcore Priest-heads as an irreproachable classic. There’s no doubt that it set the blueprint for much of the metal that was to come. But Epitaph is a failure. An ambitious ballad that had aspirations to sound like Queen, the tune is dragged way down by Halford’s dangerously lounge-singer lead vocal.

Tucked away on 1984’s Defenders Of The Faith, this can’t hold a candle to the wild intensity of Freewheel Burning or Jawbreaker. Jam-packed with clichéd riffs and clichéd words, it sounds like a tune that was cynically written to appeal to America’s biking community. Mid-tempo plod with no heart or soul, lyrics like ‘Tough as steel stop at nothing, look at fate in the face, don’t take no for an answer, grab the lead in the race’ tell you all you need to know about this song’s ambitions.

Drowning under the weight of its own pretension, this number from 2008’s Nostradamus is suspiciously light on guitars. And while its mid-section would have sounded perfectly home on a film score for a Batman movie, the rest of the song sounds like a band trying awfully hard to inflate something that has a hole in it. Lots of puff. No end result.

The closer from 2008’s Angel Of Retribution coagulates around a ‘so-so but bearable’ bone-headed grinder of a riff. But the real problem is that we’re asked to stick with this tune for 13 and a half minutes, and avoid laughing out loud at the idiotic pseudo-operatic nonsense of the chorus. ‘Loch Ness confess, your terror of the deep, Loch Ness distress, malingers what you keep.’ Oh, do stop it. It’s not even English!

The Turbo album was released in 1986 when hair metal held sway, and you can hear Priest trying really, really hard to grab a piece of the action here. Rock You All Around The World is a shameless attempt to play it dumb. The breakdown chant-along section and gang-style backing vocals are particularly irritating. The whole thing sounds like metal produced by an A&R department. Nasty.

Recorded as part of the Turbo sessions, and eventually released on a 2001 reissue of 1982’s Screaming For Vengeance, this is an attempt at a heart-felt soft/hard epic gone badly wrong. Mawkish and horribly overwrought, Halford sounds particularly uncomfortable singing terrible lines like ‘You came along and captured me, now I’m a prisoner of your eyes, trapped in time I cannot leave you’. Frankly, so he should.

Oh dear. If we’re being kind we can say that the band at least tried to Priest-ify this r’n’b standard’s verses. But that’s not to say it saves this Chuck Berry cover, which appeared on 1988’s Ram It Down. The chorus is so incredibly bad that it almost beggars belief and drags the song down into depths so low it’s amazing the band’s hardcore following ever forgave them.

Recorded during the Turbo sessions and released as a bonus track on a 2001 reissue of British Steel, this Halford/Downing/Tipton composition is supposed to be a flag-waving, tear-jerking ode to the British Isles. The fact that it sounds like Big Country messing around in rehearsals tells you all you need to know about this absolute shocker.