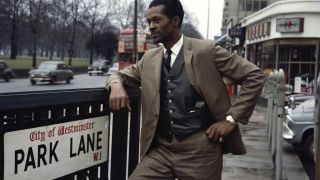 Chuck Berry is one of rock ‘n’ roll’s last living pioneers and most irascible characters, boasting a criminal record before he’d made a vinyl one.

His pared down, driving guitar style blueprinted rock and the Rolling Stones, while his songs took lyric writing into vivid teenage Technicolour, dealing with the modern age and giving new spins on love and romance. “If you tried to give rock ‘n’ roll another name, you might call it Chuck Berry,” said John Lennon, while Keith Richards declared about the first Stones album, “Everybody starts by imitating their heroes; for me it was Chuck Berry and Muddy Waters.”

Ironically, it took the success of the Beatles, Stones and other bands who successfully covered his songs to make Chuck known to British music fans after 1963. This month marks 50 years since he made his live debut in the UK, at Finsbury Park Astoria on May 9, 1964.

Coming from a middle class family, Chuck was allowed to pursue music from childhood, making his stage debut in 1941 while still at school. Three years later, he was sent to a Missouri Young Men’s prison for stealing a car at gunpoint with some mates. He got out in 1947 on his 21st birthday, working in factories then training to be a beautician. By the early 50s, he was playing guitar in bands, inspired by T-Bone Walker and his friend Ira Harris. A turning point came when he started playing in pianist Johnnie Johnson’s band, striking up the relationship which would last for much of his career.

In May 1955, Chuck traveled to Chicago, where he met Leonard Chess of Chess Records about releasing his blues material. But Chess was most interested in his reworking of a Bob Wills’ country tune called Ida Red which Chuck had renamed Maybellene. Along with a band including Johnnie Johnson, bassist Willie Dixon and Bo Diddley’s maracas shaker Jerome Green, Chuck recorded the song, which sold over a million copies when released as a single, hitting the top ten that September. It was included by the Hall Of Fame in the songs that shaped Rock And Roll, along with…

When people have to name one Chuck Berry song, this is often the most mentioned. It’s one of the most covered songs in rock history (the best being by Hendrix) and one of four tracks representing rock ‘n’ roll on the Voyager spacecraft. Admitting it’s part-autobiographical, Chuck wrote the song in 1955, about a poor country boy who plays a guitar “just like ringing a bell” and one day might be famous with his name in lights. The song established the famous Chuck Berry intro, which he had actually nicked from Carl Hogan’s guitar solo on Louis Jordan’s Ain’t That Just Like A Woman (1946).

Released on March 31, 1958, the song got to number two on the R&B charts and eight on the Billboard Hot 100. Chuck went on to write 30 more songs around the Johnny B. Goode character. He was on a roll as the classics kept on coming, including Roll Over Beethoven, Rock And Roll Music, School Days and Sweet Little Sixteen.

By the end of the fifties, Chuck is riding huge success with hits, movies and gigs, investing in real estate and opening a mixed race club in St Louis. In December 1959, he’s arrested under the Mann Act after allegedly transporting a 14-year-old Apache waitress over state lines to work as a hat check girl at his club. Chuck is sentenced to five years after the first trial in March 1960, but successfully appeals that the judge was racist and gets a second trial in May the following year, which lands him a three year stretch. Chuck ends up doing one and a half years from February 1962.

Chuck had continued recording and touring during the trials but seen his popularity decline. His last single released before going inside was Come On, which provided the first single for five R&B nuts from Kent called the Rolling Stones.

The previous November, Guy Stevens phoned Chuck then wrote up the conversation in Record Mirror, one of the music weeklies of the time. Yes, that Guy Stevens, future instigator of Procol Harum, madcap creator of Mott The Hoople and producer of The Clash’s London Calling, famous for throwing chairs against the wall and setting fire to studios in the name of whipping up a buzz.

Talking about the upcoming UK tour, Guy wrote (thanks to Rock’s Back Pages for this gem); “The appearance of this hip-swinging, multi-talented singer-guitarist on our shores within the next few months should provide another exciting chapter in his turbulent career, and also provide many thousands of his fans in this country with one of the biggest thrills of their lives. And now it only remains for his next single release over here Johnny B. Goode/Run Rudolph Run to shoot up the charts to really establish Chuck Berry as the greatest show business phenomenon of recent years.’

The packed house were treated to hits such as School Days, Roll Over Beethoven, Memphis, Johnny B. Goode, slow blues Wee Small Hours and Nadine.

The following night, Chuck played Hammersmith Odeon (now Apollo, or whatever it’s called). It was uproar from the off with Nadine prompting a stage invasion by teddy boys. When it happened a second time, the safety curtain was lowered and show curtailed.

Halfway through their first US tour, the Stones spent two days recording at Chess Studios in Chicago; the birthplace of the albums they had pored over and absorbed during their formative days. After Keith was shocked to encounter Muddy Waters up a ladder painting the ceiling, the band laid down tracks which would appear on their Five by Five EP and second album, including Chuck’s Around And Around and Down The Road Apiece. Their awe at being in the birthplace of the blues was compounded when Chuck himself showed up and gave them the thumbs up.

7. February 3, 1972: My Ding-a-Ling recorded at the Lanchester Arts Festival at Coventry Locarno.

A novelty song written by Dave Batholomew in 1952, My Ding-A-Ling usually provided a bit of midset playground humour with knob joke fnaars and winks, but got seized on as a single and became Chuck’s only number one; much to the disgust of rock’n’roll purists. A live version of Reelin’ And Rockin’ was released the following year and became his final top 40 hit in the US and UK. Chuck hit the road, carrying only his Gibson guitar and a briefcase which he insisted promoters fill with cash before he took the stage with a local pickup band he had never met before. His performances could be erratic, the bands terrible (although Bruce Springsteen and Steve Miller recall their Berry experiences) but younger fans still lined up for a glimpse of a genuine legend, hoping he might even treat them to his duck walk. His last new studio album was Rock It in 1979; same year he served four months after the inevitable tax evasion bust.

Two concerts staged in St Louis to celebrate Chuck’s 60th birthday are filmed for a documentary called Hail! Hail! Rock ‘N’ Roll, directed by Taylor Hackford. Keith Richards is musical director, given the unenviable task of trying to bring into line the man who inspired him to pick up the guitar. Keith gives Chuck the best band he’s ever had, including Eric Clapton, Robert Cray, Bobby Keys and Etta James. He also fetches back Johnnie Johnson, who’s been driving a bus. Rehearsals reveal how much input Johnnie had on Chuck’s songs, which had gone unacknowledged and unpaid since those first sessions and turns into an ugly court case the piano veteran had no hope of winning. The film made compulsive viewing though, particularly the standoffs between Keith and his original hero.

Chuck is sued by a group of women who claim he had installed a video camera in the ladies’ loo of his restaurant in Wentzville, Missouri. Chuck claims he was trying to catch a thief in the house but opted for a class action settlement with 59 women, costing him over a million in legal fees. A police raid on his house unearths video tapes of women using said restroom, one a minor, along with 62 grams of marijuana. To avoid child abuse charges, he pleads guilty to the dope and is handed a six month suspended jail sentence, two years’ unsupervised probation and ordered to donate $5,000 to a local hospital.

After that it’s back on the road, most recently a 2008 European jaunt. During a 2011 show in Chicago, Chuck collapses from exhaustion and has to be helped off the stage, living up to a declaration he made to an English newspaper in 1967 that “When I stop walking - that’s when I stop performing.”.