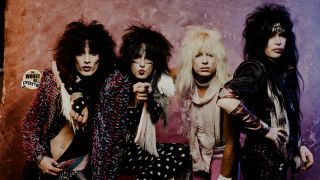 The living embodiment of ‘80s rock excess, Mötley Crüe often seemed to be way more interested in the sex and the drugs than the rock ‘n’ roll. Don’t believe us? Well listen to these 10 turkeys…

She may very well need rock’n’roll, but not like this, surely. This song, from New Tattoo, sounds like some old rock lags trying hard to summon up the spirit of glories past, but coming to the conclusion that their hearts really aren’t in it. I wonder why. Not out and out awful. But not far short.

The accepted wisdom is that Mötley’s debut is all killer, no filler. Not true. Toast Of The Town is a ham-fisted attempt at glam metal that features a host of dummkopf riffs plodding all over the place and a vocal that’s desperately – and unsuccessfully – searching for a tune. Quick tip. Avoid the guitar solo at all costs.

There’s always been a suspicion that beneath the Crüe’s stadium straddling exterior there lurks the beating heart of a bad bar band. Here’s the aural proof from Girls, Girls, Girls. The song’s hackneyed title isn’t the only thing that’s second-hand about this re-tread of a re-tread of a re-tread. The riff sounds like something a roadie plays to check a guitar sound before the lights go down.

There are times when the Crüe want to be Aerosmith so bad it hurts. This third track from Dr. Feelgood is one of them. But here the band display none of the funky fluidity that gave the ‘Smith their edge. And Vince Neil really is no Steven Tyler, is he? There are some attempts to weld on some Beatles-esque psychedelia, here. Unfortunately, that’s just another epic fail.

Taken from self-titled album, known as “the one that doesn’t feature Vince Neil”, the fact that this doesn’t sound much like the Crüe is no excuse. Vocalist John Corabi tries his best to inject some life into a gossamer-thin idea by summoning up the spirit of Mott The Hoople in the lyrics and even letting off a couple of fucks. But a poor tune is a poor tune.

Sung by Tommy Lee, this album closer on Generation Swine tries to summon up the ghost of John Lennon at his most mawkish. But this is a particularly ham-fisted attempt at a tear-jerking ballad in ‘honour’ of the Crüe drummer’s son. Probably very touching for the people involved, including mum Pamela Anderson. But embarrassing and awkward for the rest of us.

Should be retitled ‘Lamer Than Hell’. This is two minutes and 32 seconds of metal sludge from Theatre of Pain that the band would doubtless have felt had ‘a groove’. It doesn’t. It’s just slow and tedious, dragged down further by an impossibly irritating Vince Neil vocal. Check out that high-pitched wail at the end of the chorus. Or rather, don’t!

Mötley in their pomp was more of a soap opera than a rock band. Interest in Tommy Lee’s penis and Nikki Sixx’s heroin addiction was far greater than interest in the music. This song from Dr. Feelgood is the kind of tossed-off tune that makes you suspect that at times the band felt the same way.

Why Mötley felt the urge to include this live version of the Elvis classic on Girls, Girls, Girls is anyone’s guess. But what we do know is that this is a god-awful version of the song – over-fast, ultra-clumsy and mega-irritating. You think you’ve just about escaped this musical hell when Vince Neil decides to scream, ‘one more time’. Aargh! Run for cover!

Taken from Theatre Of Pain, this is about as painful as it gets. Save Our Souls is a dreadful walking-paced dirge that makes four minutes 13 seconds feel like four hours and 13 minutes. Slow metal needs to convey a sense of oppression, claustrophobia and even fear. This just makes you want to go to the bar.