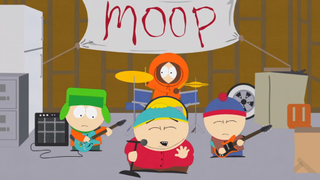 South Park started life as a cut-out animation project about a gang of “complete little raging bastards” in a snowy Colorado town.

The Christmas-themed clip quickly became one of the world’s first viral videos and was so popular that its creators Matt Stone and Trey Parker were given the chance to develop the idea into a cartoon for Comedy Central. The show made its debut in the summer of 1997, with Primus providing the song’s unsettling theme tune.

Over the last two decades, the cartoon has frequently wound up celebrities and religious groups with its depiction of pretty much any taboo topic you can imagine.

While Parker and Stone voice many of the characters, the show has featured guest appearances by George Clooney (who was a dog), Jennifer Aniston and Henry ‘The Fonz’ Winkler. They’ve also featured a ton of rock stars, including Ozzy Osbourne, Bono and Korn.

Check out the gallery of the show’s best rock cameos below.

The new season of South Park debuts on Comedy Central at 10pm on September 18.