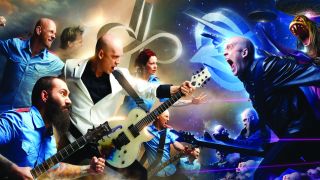 Devin Townsend said that his latest Devin Townsend Project album Transcendence was about “getting over” himself and the need to be a “controlling prog dude”. It also blew our mind back-to-front.

Now comprising Devin on vocals and guitar, Dave Young also on guitar, Brian Waddell wobbling the bass, drum-abuser Ryan Van Poederooyen and Mike St-Jean playing keys, the Project has defied genre, audience expectations and critics. But how does it all compare to his latest offering? Let’s have a look, as we rank his albums in order of greatness.

Something had to go last, eh? One half of the Project’s Z² opus, Dark Matters is a sequel to Devin’s 2007 Ziltoid The Omniscient record – it’s about an alien searching for the ultimate coffee bean, duh. This time around, Ziltoid goes to Earth. There’s these things that look like ballsacks – they’re called Poozers, obviously – Chris Jericho fully throws himself into the role of ‘Captain Spectacular’ and the story races along like War Of The Worlds taping over the Jeremy Kyle Show. The story is entertaining but, musically, there’s hardly any bloody songs. The story takes precedence over the actual music; when it gets going, however, it rips hard enough to send Poozers tumbling through a wormhole and into your living room. Ziltoid Goes Home is Devin channelling that razorblade rage he had through Strapping Young Lad, Deathray is a definite arse-shaker and March Of The Poozers is a pompous, carnivalesque classic. Aside from these few, Dark Matters’ space rock ridiculousness falls short on record, making much more sense when translated to the Royal Albert Hall’s stage last year. And yes, it is a Project record: it’s performed by the Project. Don’t let iTunes or Wikipedia give you any shit.

With Epicloud came the solidification of the Devin Townsend Project’s sound: the new-age, poppy sensibilities were pushed to the fore, as were Anneke van Giersbergen’s beautiful vocals in a similar style to Addicted. Basically, it’s an auditory all-you-can-eat; a gospel choir adds drama to proceedings, in particular the poppy, childish refrain of Lucky Animals; Save Our Now, Liberation and Hold On are angelic, undeniable pop anthems; the gorgeous, acoustic musings of Divine are a proper treat that deserve to be aired live more often. The Project’s mixture of all these elements alongside that arena-breaking orchestration, subtle ear for the mainstream and Devin’s powerhouse, West End-ready delivery – go for True North and the re-recording of Kingdom for prime examples – combined to ensure that this record sounded like nothing else on the planet. Although a couple of tracks overstay their welcome – Grace, we’re looking at you. Laugh, love, live, learn when to fuck off – Epicloud is a treat and set the Project up for future glories.

Upon release, Deconstruction drew similarities to Devin’s former outfit, Strapping Young Lad. Well yeah, it’s widdly, it’s angrier than an arsehole at Wetherspoons’ Curry Club and it features GWAR’s Oderus Urungus saying stupid shit, but for the most part this record goes down avenues Strapping never thought to explore. The electronica-drenched intro of Praise The Lowered? The sixteen minute-long The Mighty Masturbator? This is Townsend drawing upon basically everything he’s recorded in his professional career, enlisting the fucking Prague Philharmonic Orchestra and several buddies along the way – Gojira’s Joe Duplantier and Greg Puciato from the Dillinger Escape Plan pull out star performances, as do the rest – to create a soundscape of textured, unyielding madness revolving around one man’s quest for the true nature of reality via a cheeseburger. It’s Meshuggah staring in an episode of Adventure Time; a church full of sinners doo-wopping to Hell with Aphex Twin and Opeth battling it out in the cemetery. Yeah, Planet Of The Apes didn’t really need to be there and the toilet humour almost derails the train (the one you see in the Juular video, cross-referencing all over the shop), but on the whole Deconstruction rocks.

It’s Epicloud’s depressive brother, cobbled together when the record label asked Devin to come up with something aside from Z²’s original vision: farting ballsacks, coffee-hunting and trope-heavy sci-fi goofiness all the way. Many of Sky Blue’s songs deal with death and personal struggle, resulting in a curiously oxymoronic outing; the last third is proggy, downtrodden introspection in the same vein as Terria; the rest, however, sees an improvement on Epicloud’s endless positivity. The piercing synths and standout vocal performances from both Anneke and Devin are certain winners on Sky Blue’s title track, while Silent Militia is almost certainly what David Brent practices his dance moves to. The seething, piss-hot rage of Deconstruction and even Addicted is almost completely absent, replaced with an enrapturing sense of identity. Much like Epicloud, Sky Blue only sounds like the Devin Townsend Project. The unreleased version of Fallout with Devin on the verses needs to be made available to the public, though. Please?

It’s getting almost impossible to rank these records now, right? However, Ghost bites the bullet at no. 4, seeing as its soothing, marshmallow moistness would probably absorb said bullet and tell it to put on some harem trousers and chill out. The biggest oddity of the lot, Ghost has more in common with stuff like Enya than it does Meshuggah. This is a carefully crafted, serene soundscape, applying Devin’s spatial awareness and progressive rock tendencies to world music. And what a result. A few tracks like Fly and Blackberry are instant sing-alongs, but most of Ghost’s beauty is built through layers of tender, delicate vocals and, more importantly, that instrumentation. Kat Epple brings the most gorgeous tonality to Texada’s closing throeswith her standout flute performance of the record, while the strings of Heart Baby and As You Were couple with Devin’s vocals, dead set on extracting tears straight from your eye holes. Ghost is arguably the most vulnerable moment of Townsend’s career, making Let it Roll sound like Hammer Smashed Face and, more importantly, proving that Dev doesn’t need to rely on humour or heaviness to make catchy, immersive music.

The first album under the Devin Townsend Project moniker. The first release from Hevy Devy since the ridiculously metal Ziltoid The Omniscient and his brief break from music. And what a return. Ki is glorious. It’s Devin channelling his Pink Floyd, his singer-songwriter and his heavy metal trademarks, all alongside new bits. This is a landmark achievement – a reinvention, almost, stripping away the wall-of-sound production he’s famed for and swapping it for an almost live feel. Coast harbours one of Townsend’s sweetest vocal melodies ever, while the quasi-metal Disruptr is restrained in its bluesy cage before exploding into a stomping, groove-laden extravaganza. Lady Helen is heart wrenching – listen to that and try not to cry. Ché Aimee Dorval’s subtle guest vocals and the Elvis-inspired, bluegrass pornfest of Trainfire adds a touch more of Devin’s eclecticism to the mix, setting the space country template for his Casualties Of Cool project a few years later. Quiet Riot is a reworked, re-addressed acoustic rendition of Cum On Feel The Noize. This is all totally true and, in the context of Devin’s canon, it doesn’t seem that weird. As a stand-alone piece, Ki is a varied, subtle display of Townsend’s knack for atmospherics and song writing, its catchiness being the reason it pips Ghost in the list. But as a work within Townsend’s catalogue? Ki is a middle finger to conformity.

If fun were a drug, Addicted would be illegal and all its listeners would be locked up. The polar opposite of its counterpart, Ki, this is just big, dumb metal that capitalises on Townsend’s choruses and Anneke’s mesmerising larynx. Devin likened the record to Boney M and Meshuggah; that comparison would make no sense anywhere else on the planet, but Addicted makes it work. The gnarled, groovy riffs of the title track, Universe In A Ball! and Numbered! are proper ragers; the subdued, timeless ballad of Ih-Ah! is a blinding example of how Townsend can control your heartstrings as easily as he contorts Ziltoid, reducing fully-grown humans to tears with a refrain that’s just made up of vowels, basically. Devin’s self-referential meddling still occurs, the leitmotif “Hey! You’re awake!” popping up on the album’s bookending tracks and The Wildhearts’ Vanilla Radio being a direct influence on Resolve! (he was briefly a member of said band in the ‘90s, and still keeps up with frontman Ginger). This is heavy metal made for arenas. This is pop music for a radio station that doesn’t exist. If you’re sad, Addicted will cheer you up. If you’re happy, Addicted will ensure your mood never slips. Addicted is damn essential.

No, he’s not paying us to say this – if we got cash every time we wanked Devin off, we’d have very sore wrists and enough money to actually own him. But Transcendence, the Project’s latest full-length, has it all. The poppy, new-wave leanings of Epicloud are mashed together with Sky Blue’s noodly, prog-laden influences of Terria and Synchestra; smatterings of balls-out, Addicted-level fun don’t go amiss either, Mike St-Jean’s keyboards smothering Offer Your Light with a tea towel covered in crushed-up blue Smarties. Higher’s mid-section crushes like Strapping Young Lad, Ryan van Poederooyen turns in the strongest drumming performance of his career and Devin is just so fucking majestic, his voice conveying a controlled, commanding sense of power. The chorus to the title track, coupled with the orchestration that makes Septicflesh sound like they recorded in a cat’s anus? Yes. The Project fritter nothing away – not even a second – with even Devin’s solos exuding a cool, necessary flare to songs like Stormbending and Failure without ever appearing over-indulgent. It’s all a technical punch to the brain, but if the mainstream got hold of this it could genuinely be pop music – if we lived in a perfect world, that is. Transcendence is the record where the Project finally wrote as a collective unit, filtering ideas through Devin’s dome to craft what is undeniably the band’s most important, engaging statement to date.