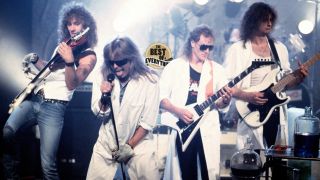 For the last 30 years, I’ve been an avid fan of Helloween. So much so, that I took my last name from their first album and even have their pumpkin logo tattooed on my arm.

It’s pretty near impossible to choose only 11 of their songs as my favourites, but after some serious deliberation, this is my list. Remember if you don’t like these classic tunes, you run the risk of being turned into a savage pumpkin…

RIDE THE SKY (Walls Of Jericho, 1985)
The kick off track from their debut album was the first Helloween song I ever heard. It was the template for the power metal genre they single-handedly created. What would it sound like if Bruce Dickinson joined Metallica? If James Hetfield joined Iron Maiden? With Ride The Sky, we now know.

HALLOWEEN (Keeper Of The Seven Keys Part 1, 1987)
With the arrival of Michael Kiske, Helloween now had the world class singer and frontman they were missing previously. With him, their songwriting matured in leaps and bounds – and this 13 minute epic was the standout.

EAGLE FLY FREE (Keeper Of The Seven Keys Part 2, 1988)
If I was to make a heavy metal mixtape for aliens to discover thousands of years from now, *Eagle Fly Free *would be the first track on it. It’s the epitome of the classic Helloween sound and features a drum and bass solo. How metal is that?

I WANT OUT (Keeper Of The Seven Keys, Part 2, 1988)
This is the closest Helloween ever came to a ‘hit single’ and it still holds up to this day. Their singer Michael Kiske sounds amazing and the video – that apparently takes place inside his mouth – is a kitschy classic.

KEEPER OF THE SEVEN KEYS (Keeper Of The Seven Keys, Part 2, 1988)
This was even better than their previous 13 minute opus and it may have overtaken Iron Maiden’s Rime Of The Ancient Mariner as my favourite heavy metal epic of all time.

FALLEN TO PIECES (Gambling With The Devil, 2007)
Part ballad, part thrash metal, this is the kind of song that Metallica needs to write in 2015. It could’ve been a huge hit, but Helloween doesn’t write hits – only classic tunes.

BONUS ‘WHAT THE FUCK WERE THEY THINKING?’ CATEGORY

Fozzy kick off their European tour on November 13. For full details, see their official page.