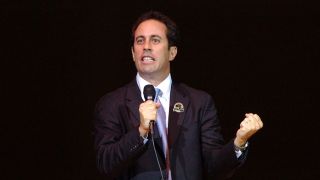 Rush bassist and vocalist Geddy Lee has a long-standing affinity with comedy.

In 1981, he featured on the hit song Take Off, which appeared on the Canadian comedy album The Great White North by Rick Moranis and Dave Thomas, as a vehicle for their TV characters Bob and Doug McKenzie.

Along with Rush bandmate Alex Lifeson, he also recorded a rock version of the Canadian national anthem O Canada for the soundtrack to South Park: Bigger, Longer, and Uncut. In 2006, he joined Lifeson’s side-project, the Big Dirty Band, to record songs for Trailer Park Boys: The Movie.

On top of all that, he regularly attends stand-up comedy shows in both the UK and North America, so we asked him to pick who he regards as the best 10 comedians.

Geddy: “Aside from just being hilarious and topical, his television show [Louie] in America has become really important. It’s post-modern comedy, in the same way as Andy Kaufman and Jerry Seinfeld before him, where they did things on television that you weren’t quite sure whether they were kidding or not. Louis C.K. takes that to another level, and his TV show is compelling and hilarious and dark – it’s really interesting.”

“I mentioned him already, and you can’t think of American comedy without thinking of Jerry Seinfeld. I’ve seen him do stand-up and he’s funny in a very different way to someone like Louis C.K, but he’s a guy that can take every day things and turn them on its ear. That’s always a winning comedic formula for me.”

“To me, Eddie Izzard always sounds like he just smoked a big fat doobie, and he doesn’t really know where he’s going, but he continually surprises with how intelligent his point of view on comedy is. The worldliness of his comedy is fantastic. Some artists are very improvisational and some of them stick to the script, and Eddie Izzard is a guy who goes to the improvisational side. He obviously has a script to begin with, but he lets himself go out there.”

“Jonathan Winters is sadly no longer with us, but he was like Robin Williams before there was Robin Williams. He was such a creative comedian that did wacky characterisations and imitations, and sort of little sketches within his stand-up routine. He always cracked me up, and I think he was very influential.”

“I like Amy Schumer a lot, and her TV show [Inside Amy Schumer] is a breakthrough, especially for a female stand-up. She uses her sex in a very interesting and positive and hilarious way. I recently saw her live at the Apollo [iconic New York theatre], and I thought it was a great bit of stand-up. She’s a real pioneer for women in comedy, and I liked her movie Trainwreck as well.”

“Chris Rock actually directed the Amy Schumer: Live from the Apollo movie, which I thought was really interesting. He brought a hip, topical, different kind of attitude on stage. He exposes a lot of hypocrisy about his race, and the way his race is viewed. And he just does hilarious, high-energy stand-up comedy. He’s so right on!”

“Steven Wright is an American comedian. He does a lot of deadpan, unemotional word play. He’s a very different kind of comic, but I find him absolutely hilarious and I love his whole shtick.”

“I really like Stewart Lee. I don’t really have to explain him to British fans. I come to London a lot with my wife and we’ve been to see him a few times here – we usually sneak into the Leicester Square theatre whenever he’s playing. The first time I saw him I didn’t know a lot of the references, because he makes fun of a lot of local British TV personalities and other comedians. But he’s so dry and clever, and I like the way he tries out a lot of material. I saw his recent show where I guess he was prepping for his next TV special, so he was trying out a lot of new material, and it was brilliant. I love the way he badgers the audience too, and the way he ties all these different things together. I know he likes to stay in Britain, but I think he could internationalise his material and do really well in the States.”

“I think you have to mention Richard Pryor. He’s sadly no longer with us, but he was a breakthrough comedian. I remember listening to his routines on record, and he was the first guy to really use race in a different way, which at that time was pretty daring for a comedian. He opened a lot of doors for people like Chris Rock. There was a real pain in his story telling.”

“The last person I’d pick is one of the great, overlooked stand-up comedians, and that’s Woody Allen. Listen to his early stand-up records – they’re so smart and absurd, and funny. He was from that whole absurdist school of comedy, and he had such great comic timing. I highly recommend those early records of him playing in clubs. They’re so funny.”