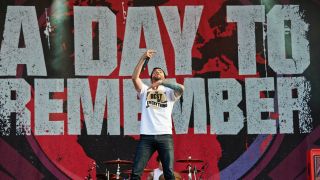 Ocala quintet A Day To Remember made the headlines last week when they were awarded a $4 million payout when they won a legal battle against their old label, Victory Records over a breach of contract.

Legal disputes aside, the band have swung between punk, metalcore and angry bursts of hardcore throughout their 13-year career, and their latest album has seen them make a triumphant return to the melodic pop-punk that’s always been part of their sound.

As the band prepare to tour the UK in January, we pick the 10 best cuts from their six-album catalogue.

The third single from their latest album sounds great when cruising along an open road on a warm day, windows down. Trust us, we’ve tried. This sounds like ADTR have finally nailed how to write a solid anthem.

It might not get many live outings, but It’s Complicated deserves to see the light of a gig more often. Its insistent rhythm is made for a rowdy crowd to jump to. The upbeat sound is actually quite at odds with the lyrics, but we’ve all had times where we want to “avoid the sun and cancel plans with everyone”. A stomping beat goes some way towards pulling us out of that fog.

The passion and sincerity shines through in this ode to the city Jeremy McKinnon and his bandmates grew up in. He reminisces about being told “this life is a dream”, but it’s one he’s now living. That fuzzy feeling when everything falls into place – a rare emotion, but a treat when it happens – is captured in the simple but upbeat chord progressions, and a chorus you’ll want to hum when everything’s peachy.

Your Way With Words Is Through Silence

In their early years, ADTR took more of their cues from the pop-punk greats than the breakdowns and heavy rhythmic pounding of metalcore. The verses recall Blink 182, and blends that bouncy, slightly off-kilter rawness of skate punk with a heavy chorus, and shows off the best of both sides of their sonic personality.

The blast beats and heavy, brisk chugs make Monument sound darker than it is, and it’s another example of how adept ADTR are with mixing the bright and the more sinister facets of their sound. The band obviously think so, too; it’s a frequent addition to their setlist.

I’m Made Of Wax Larry, What Are You Made Of?

This dark and vengeful stormer from Homesick gets its name from the altogether less dark and vengeful Ben Stiller movie A Night At The Museum. The sunny pop-punk of the previous two albums gives way here to something angrier, fuelled by a minor key and Chad Gilbert’s polished production.

Speak Of The Devil

Pogoing back and forth from a metalcore growl to clean vocals within one verse could make this sound schizophrenic, but it works. When the chorus kicks in, the backing vocals and drum fills recall The Offspring in a subtle burst of nostalgia, without the feeling that their pop-punk forerunners are being ripped off.

The Plot To Bomb The Panhandle

One of the heavier offerings from For Those Who Have Heart, Panhandle often provides a loud and frenzied finish to ADTR’s live shows. Its mix of aggressive hardcore breakdowns and frenetic punk show that they don’t have to rely on singalong melodies to create something strong.

They don’t go full heavy often, but when they do, they leave no ceiling unrattled. Bad Vibrations has no almost clean vocals whatsoever, and its relentless roar is ADTR harnessing their dark side to great effect.

The Downfall Of Us All

It might start off a bit weird, with a chant akin to something a swaying group of drunken estate agents might bellow after the office party, but once that’s out of the way, a persistent rhythm and a guitar that battles impressively with syncopated drums make this an instant crowd pleaser.

A Day To Remember tour the UK from January 22.