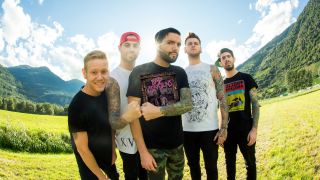 Everyone’s favourite pop-punk/metalcore crossover merchants A Day To Remember are just about to release their sixth studio album Bad Vibrations. If there’s one thing you need to know about the Ocala heavyweights, it’s that they know how to write a chorus. And a breakdown. And a hook. Okay, they’ve got their songwriting down pat. But is a sixth record pushing the formula too far, or are they just getting started? Let’s look at each track on the album to find out…

While A Day To Remember are often criticised for not being heavy enough, the album’s title track is a straight-up contemporary metal song that you could imagine the likes of While She Sleeps blasting out. Fuelled by vitriol, it still packs bags of bounce and the obligatory breakdown that sends fists straight through the floor.

Here’s the big single, powered by frantic punk impulses with a drum pattern that sounds as if it could all fall apart at any moment. But don’t go thinking it’s all pop-punk – this has a harder edge surrounding the poptastic, anthemic chorus that’ll leave you humming it for days. In fact, frontman Jeremy McKinnon compared it to Ace Of Spades – so make of that what you will.

A band usually known for their positive outlook, Naivety might sound like a happy-go-lucky pop-rock tune but lyrically, it’s so much darker. Jeremy reflects on his loss of naivety, his dislike toward growing older, and having no apologies for being himself. But yes, it’ll still make you pogo and wish you were in a Blink-182 video.

You could accuse Bad Vibrations of being schizophrenic record that switches between pop-punk and metalcore at a moment’s notice, but that’s what A Day To Remember are all about. Jeremy’s harsh vocals sound more snarling and disgusting than on previous albums and the monstrous chugging guitars leave your neck in tatters, while the ‘No war! No peace!’ breakdown threatens to level your house. Nice. Especially if you need your house levelling for some reason.

The second longest song at four minutes and 36 seconds, and it’s the only one that lacks identity. The instantaneous impact of the previous four tracks were like baseball bats to the earholes, but now the mid-album lull is in danger of treading water. Sure, all the punked-up elements are there but none are reacting in a meaningful way.

The threats of dullness are quashed by this gang-vocal led and satisfyingly menacing chugfest. Back in ADTR’s more metallic territory, in which they thrive on this album, the uplifting, epic chorus is precisely what you want to hear after a long day at work. Stick your fists in the air and tell your boss what you really think of them while blasting this.

*If you get the sack, we accept no responsibility whatsoever.

A satisfyingly typical A Day To Remember track that bridges that gap between saccharine choruses and brutal vocal hooks. There’ve been many imitators but none are as succinct and polished as this Floridian metalcore mob – and no-one can write such a swelling chorus that you just want to bathe in. Can you get riff-scented bath bombs? You can now.

It was inevitable really – it’s the slightly emo, all-inclusive, sombre one about being proud to be different. While some songs of this ilk come across as insincere, there’s something genuine about ADTR’s delivery and persona that gives you hope this song might actually help someone in need.

Keeping the emotion needle deeply in the red, it’s time for the break-up song. While the song conjures images of someone different for all of us, we can all unite and admit this ripping guitar solo that comes out of nowhere is more than welcome before a brief respite into heavier territory. Sure, it could come across as wimpy, but the size of the chorus more than makes up for it.

Turn Off The Radio

From the instant the vocals kick in, you know ADTR aren’t letting up any time soon. The production on the record is nothing short of extraordinary, making these five men sound as large and ferocious as King Kong’s bodybuilding uncle. You know, the one who can’t get a t-shirt to fit. This will no doubt be a bona fide live favourite soon – but don’t expect to hear it on the radio.

Oh dear. The big ending is a bit cheesy, huh? Brooding instrumentals with echoing vocals repeating the song title does not a meaningful song make. While it’s an interesting diversion for the band, ending the record on Turn Off The Radio would’ve been a better idea.

Bad Vibrations will be released on September 2.