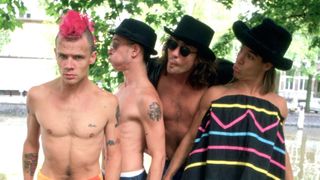 Formed as a joke to play one show in 1983, the Red Hot Chili Peppers have kept the gag going for well over three decades. Beset by drug issues and, early on, the death of guitarist Hillel Slovak, they settled on what is their definitive lineup for 1989’s Mother’s Milk – founders Anthony Kiedis and bassist Flea were then joined by inventive guitarist John Frusciante and drummer Chad Smith – and those four refined the band’s early punk-funk sound into its apotheosis with 1991’s multi-platinum Blood Sugar Sex Magik. Frusciante left them for 1995’s poorly received One Hot Minute before returning and helping reinvent the band into a less funk-orientated, more adult rock band. It worked, 1999’s Californication was their most successful album and 2002’s Frusciante-driven By The Way their most interesting. A sprawling double record followed – 2006’ Stadium Arcadium – before Frusciante left them again, this time with the band genuine global megastars.

The Chili Peppers’ third album – The Uplift Mofo Party Plan – was, four years since the band formed, their first record to have any kind of consistency. Driven by Flea’s rampant bass, Behind The Sun stood out against, say, Fight Like A Brave because it actually sounded like a song. With chorus, structure and groove it showed the band they had more depth than punk-funk mess arounds. Still remarkably fresh.

John Frusciante returned to the band for 1999’s Californication and the Chili Peppers notably upped their game from 1995’s One Hot Minute. The title track – ripping into plastic Hollywood culture – was a bugger to complete. Kiedis, delighted with his lyrics, presented them to the band who struggled to write a song around them. Finally, it came to Frusciante, who wanted to channel The Cure in the song, and the subsequently sparse partnership between guitar and bass has become a staple of the band’s live set.

A cover of a Stevie Wonder song, admittedly, but Higher Ground is the Chilis at their funkiest. Flea attacks the bass line as though he wants to kill it, injecting attitude and energy while retaining the groove. Recorded for the band’s fourth album, it marked the first formation of the classic lineup of Anthony Kiedis, Flea, guitarist John Frusciante and drummer Chad Smith. Higher Ground was the moment it clicked for them.

Red Hot Chili Peppers’ 2006 double album was overlong, riddled with filler and was made following a rapprochement between Flea and John Frusciante after their falling out during the By The Way period. As a result, the album is patchy in the extreme. Snow was one of the few moments in which bassist and guitarist recaptured the magic of the Californication era, a busy but gentle guitar underpinned fluently by Flea, and carried by Kiedis’ lyrics which were, appropriately, about starting again with a clean slate.

The song By The Way is, arguably, the battleground on which the creative tension between Flea and John Frusciante at the heart of the By The Way album played out. While Frusciante wanted to introduce gentler textures and more involved songwriting, Flea remained committed to the punk-funk sound that had previously dominated. On Can’t Stop, both styles clash brutally and the results are, actually, pretty wonderful.

By The Way was Frusciante’s album – so much so that Flea doesn’t like listening to it – and, tucked away right at its very end is one of his finest moments. Guitars – many of them – drift in and out, building hauntingly until Kiedis raps. The traditional Chilis funk is entirely absent, instead an almost indie ethic prevails before Frusciante drops a frantic acoustic into the mix and the song changes tack once more. Epic, inventive and inspired, this was the guitarist at his peak. The Zephyr Song, rightly, was more of a crowd-pleaser in the tender-ballad stakes as it was a far more accessible tune, but Venice Queen was the real star of the record.

The lead single from the band’s defining fifth studio album Blood Sugar Sex Magik, Give It Away is almost the archetypal Chili Peppers song. Flea’s bassline spans the entire neck of the instrument, Frusciante’s guitar is angular, aggressive and immaculate, while Kiedis raps over Chad Smith’s anchoring drums. It went straight to the top of Billboard’s Modern Rock Chart, straight into the UK Top Ten and made it clear that the joke band of Freaky Styley and The Uplift Mofo Party Plan now meant business.

The opening single to the bands’ most successful album Californication, a worldwide, Grammy-winning, bona fide megahit, Scar Tissue marked the abandonment of the funk-punk of Chili Peppers Mk I and the arrival of the all-new mature, commercially savvy Chili Peppers Mk II. The band’s 1995 album One Hit Minute had been a pretty dismal follow-up to 1991’s massive Blood Sugar Sex Magik, partly because guitarist John Frusciante had walked out on them. His return to the fold for 1999’s Californication, then, had raised expectations of a return to the Blood Sugar era. Instead, the band entirely reinvented themselves, releasing a ballad that featured zero funk and gorgeous melody, proper songwriting and heartfelt soul-searching instead. Scar Tissue was a vital moment in the band’s genesis, but was also, fortunately, an absolute belter.

Undeniably the band’s most famous song, it also tends to be a divisive one. Hardcore fans feel it is overplayed and overhyped (and point to the B-side Soul To Squeeze as a far better ballad), but casual listeners would rather this than the dry-funk mayhem of much of the rest of Blood Sugar Sex Magik. Either way, there is no disputing the song’s towering presence. Under The Bridge pushed the Chilis into the mainstream, its rampant MTV success providing a wave for the album it came from to surf. Kiedis’s lyrics point to his (then) former heroin addiction, the depths he sank to in order to score drugs, and a feeling he had become dissociated from his band. Both pretty and stark, it made the Chili Peppers megastars.

The iconic ‘90s Chili Peppers sound: aggressive, heavy funk that could not have been written by anyone but them. Built on Flea’s powerful rhythmic bass, and Chad Smith’s in-your-face beat, it’s a barnstormer showcasing everything that was great about their early ‘90s incarnation. It has groove, it has power and it has Anthony Kiedis letting his libido loose all over the place with lines like “Little Bo Peep, cumin’ from my stun gun”. Never again would the Chili Peppers operate as such a unified creative unit as when they made Blood Sugar Sex Magik and never again would they write songs this effortlessly brilliant.

Now it’s your turn. What are your favourite Chili Peppers songs? Let us know below…