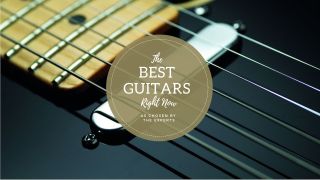 We can’t tell you what’s the best guitar for you – only you know what sound you’re looking for, what shape you prefer, how much money you have to spend – but we can tell you what we think are the coolest guitars around right now.

All road tested by our experts at MusicRadar, these guitars have the looks, the sound and that certain something that sets them apart.

And, until Black Friday come around, these are the best prices you'll find them at...

A seriously well appointed reboot, the Roadhouse is well-made (an alder body and bolt-on maple neck, with the option of maple and rosewood fingerboard, finished with satin polyurethane).

And you can hear it. Plugging in the Roadhouse reveals a slew of classic Strat tones. The pickups exploit the natural tone and woodiness of the guitar, while the Noiseless aspect lives up to their vow of silence, making them indispensable in a recording situation. As a result, bar metal, this is the best Fender electric guitar for just about all scenarios.

What to know more? Read the full review

The Custom 24’s marriage of Gibson and Fender ideals made it PRS's original vision their best-selling too.

This new Custom certainly retains the versatility of the US-made model and there's a relaxed midrange that doesn't dominate: gritty rhythm tones falling easily into a classic rock genre, while the neck sounds fluty and expressive. This is a lot of guitar for the player who needs a wide palette of sounds. Bundle in that superb vibrato, the lively resonance and easy playability, coil-splittable humbuckers and this electric guitar has to be money well spent.

An iconic, semi-hollow with a great brand-name for way under £500? Now you’re talking.

The Streamliner aims to create more affordable Gretsch guitars without losing their specific DNA. To do that it uses two new Broad'Tron humbuckers, controlled in classic Gretsch style by a three-way toggle selector switch on the bass side shoulder, a master volume on the treble side horn, and then a trio of controls by the treble-side f-hole for individual-pickup volume and master tone.

It has a different response and resonance to other new releases from Gretsch and, with these pickups, moves further from the Gretsch sound – it’s a little more airy and less punchy with a softer, squashier tonality – but the full-size pickups are easy to replace and they do broaden the sonic potential, especially for more gained styles.

If you want a great-value semi-hollow, this is among the best electric guitars for under $500.

Like all-black football boots on a field of dayglo-orange and nuclear green, the FR6UC's matt black flat finish and lack of bling lends the instrument a mean, no-nonsense aesthetic that would be a perfect fit for the modern metalcore player.

There's an ebony fingerboard and its neck is a five-piece affair, with two thin strips of 0.5mm walnut between three sections of maple. The FR6UC's suitably distressed pickup covers house a pair of Bare Knuckle Aftermath humbuckers with "accelerated bass response for exceptionally fast tracking of high-speed staccato riffing with crushing midrange and precise high-end articulation."

It’s certainly perfect for king-size-yet-articulate heavy rock tones, from Foo Fighters and Queens Of The Stone Age right through to Deftones and Slipknot. That said, the Aftermaths are by no means all about metallic high gain – back off the volume and switch to position two or four to get one of the inner coils in isolation and you'll enjoy pleasantly springy Strat-style tones. It may be none-more-black in appearance, but there's a broad range of hues on the FR6UC's sonic palette.

Prestige Uppercut FR6UCS-BKF...
Amazon
£1,599
View
We check over 130 million products every day for the best prices

The Yamaha Pacifica is still one of the best electric guitars for beginners.

Sure, it’s far from fancy and simply concentrates on the bare necessities – but it’s so well built and if looked after will be a guitar for life. An altogether more modern, brighter and lighter take on a hot-rod Strat, the bridge humbucker will surprise some – it's beefy without being too mid-range heavy and although the coil-split proves a little bland played clean, with a distortion boost it's a pretty useful gnarly and wiry rhythm voice. The solo single-coils impress - plenty of percussion and with a little mid-range beef added from the amp these get you to the correct Texas toneland. Neck and middle combined produces a fine modern Strat-like mix - and the added brightness will cut through a multi-FX patch nicely.

Designed by both Matt Bellamy and Hugh Manson, the MBC-1 is designed to hit a completely different price point to the Muse genius's full-fat Manson models. But a quick strum lets you know this is a Manson through and through: it rings like a bell, the sort of acoustic response you'd expect from a quality guitar, but not always at this price.

The MBC-1 is a pretty accurate repro of the instruments used by Matt. That big upper shoulder won't be to everyone's taste, but in playing position, it's not only lightweight (3.52kg) but with forearm and ribcage contours, it fits like a glove. And the bolt-on maple neck feels superb, too, with a deep C profile and sloping shoulders that tell your hand it's thinner in depth than it actually is.

Unusual at this price, too, is the compound radius fingerboard, which flattens out as you move up the neck; with tidy jumbo - but not over-tall - frets, it's a fast, fluid player, as well, which makes it one of the best electric guitars for hard-rock players. Pickup-wise, we have a fairly hot Alnico-powered humbucker at the bridge and a single coil at the neck. Along with a master volume, tone and three-way pickup selector, the upper shoulder also holds a kill button for stutter effects.

The So-Cal defines the 'SuperStrat' concept as originally nailed by Eddie Van Halen in the late 70s. That classic body shape, the Floyd Rose double-locking vibrato, the slim maple bolt-on neck with its compound radius and fat frets – it all adds up to one of the best electric guitars for shredding.

The Charvel's thick single-ply scratchplate comes loaded with a pair of Seymour Duncan humbuckers, a TB-6 Distortion in the bridge position and a SH-6N Distortion at the neck. Granted, the So-Cal doesn't clean up quite as sweetly as the other models in this line-up, but who cares? If you're looking for a brutal-sounding guitar with flawless playability and unshakable tuning then you won't be able to wipe the grin off your face.

A guitar that effortlessly takes you on to early The Who, The Jam or Britpop voices, while seemingly equally at home with rootsy, strummier Americana, it's a fairly weighty guitar for a semi, thanks to the full-length maple centre-block, but has a thinline depth and feels every bit like an ES-335.

It has a 'clean' sound, with low-end definition, slightly bright on the treble pickup with decent sustain and, importantly, a very respectable feedback threshold.

The Hellraiser Hybrid series guitars borrow some of the more sought-after features from the popular Hellraiser and SLS ranges (hence the 'Hybrid' name), such as the SLS's ultra-slim neck.

A particularly nice touch is the satin finish, stylishly cut in at an angle at the body and head end of the neck. An active EMG 57 humbucker, housed with a brushed black chrome cover, graces the bridge position of the guitar. Although the C-1 features master volume and tone controls, pickup selection is with a Fender-style three-way lever selector. Above these, two micro switches and an Intensity control govern the onboard Sustainiac system that features a special combined 'string driver transducer' in the neck position, resulting in infinite sustain – a fantastic (though hardly new) invention. The build quality is utterly faultless, like the playability.

The EC-1000ET is an all-mahogany single-cut loaded with an set of EMG 81 and 60 active humbuckers, a comfortably modern neck and a high level of construction quality.

Its key selling point, however, is a fitted EverTune bridge. Unlike other tuning systems, it doesn't tune your guitar for you or offer altered tunings. Instead, once set and tuned, it simply aims to stay there, thanks to a series of tension-calibrated springs and levers. We tried everything we could to knock it out of whack: huge, three-step bends, wildly exaggerated string stretching... we even put the guitar into a freezer. It came back perfectly in tune every single time.

A guitar that's perfectly tuned and intonated up and down the neck, that sounds as full and aggressive as ever, with rounded tones? This is one of the best electric guitars going.

You can nail the wood and string part of Jimmy's early Led Zep tone with this fantastic Mexican built Telecaster, a classic-looking Tele that acts a little differently thanks to a neat  four-way switch, that gives you all the standard Tele pickup selections - bridge, bridge and middle (in parallel) and neck - and an additional selection that gives you both pickups in series for a bigger, louder and more humbucker-like extra sound - perfect for gritty overdriven riffs and leads. Played clean, it gives you an essential vintage funk sound.

Apart from that, the Baja sticks relatively faithfully to the classic 60s Tele: the rosewood fretboard and alder body give a lovely smoothness to the high end. Nicely textured sounds with a neck pickup that sounds a little fuller than some older readers or vintage Fender electric guitar owners will remember.

Jimi Hendrix famously took regular right-handed Strats and flipped them over to play lefty. The Mexican-made Hendrix Strat combines a right-handed body with a left-handed neck and a flipped bridge pickup to get you closer to nailing Jimi's tone. The guitar is finished in the man's favourite Olympic White. It looks old school but has a definite modern set-up, and it's low action, and classic single-coil pickups make it a dream to play.

It might not transform you into Jimi Hendrix overnight, but don't dismiss this reboot of a classic design as just a cynical marketing exercise.

Finished in gloss black, and loaded with US Gibson Tony Iommi humbucking pickups, this SG has the iconic twin Devil horned body of a 60s original. Iommi upgrades include an ebony fingerboard, Celtic cross inlays and 24 jumbo frets. Iommi was a pioneer of the 24 fret, two octave fingerboard, something that became essential on the shred and metal guitars of the 80s and 90s.

For a wider range, read MusicRadar’s look at the top 23…