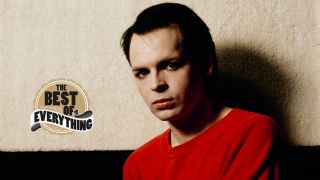 When you learn that the likes of Gary Numan and Kraftwerk are chief among the influences of Leeds-based five-piece Autobahn, their Krautrock-tinged post-punk starts to make a lot of sense. So, to celebrate the influence he’s had on the band’s career, frontman Craig Johnson joins us to talk us through Gary Numan’s top 10 moments of genius. You can check out Autobahn’s new single, Execution/Rise, at the bottom of the page.

“I remember seeing a re-run of this song on Top Of The Pops when I was younger. From that day on, I wanted to be as pale as Gary Numan. This song relates to a robot prostitute. He sounds like he’s not human and he’s singing this in the night. Terminator meets synth-pop.”

“This song is the future. Imagine hearing this in 1979; the world should have ended then. It feels like this is quite a personal song, as if Gary’s singing about being disconnected from society because of his struggle with autism.”

[Liam Hilton, drummer: The intro is like the theme music from Close Encounters Of The Third Kind.]

“No synths, kicks you in the teeth. He sounds like he’s taken a lot of speed in the verses and then he’s coming down in the chorus. The raw guitars were later replaced by the well-known synth sound.”

“A classic. I’m not sure I’d trust somebody who isn’t into this song. A song for the night. The song is instantly recognisable and conjures images of driving a long while nodding your head to the sweet dulcet tones. The snares sounds like E. Honda doing the 100-hands-slap in slow motion on Super Street Fighter II Turbo.”

“An incredible song, layered with synth and melody. The composition removes you from reality and takes you somewhere else. Very neo-noir and would sit well nicely in a David Lynch number. The song makes you feel like life’s shooting past you, faster and faster.”

“The bass line that drives through the song is great. I like the lyric ‘Stroll to the cafe my God how time flies, And I close up my brain, another friend dies’. Visions of Gary, running around the streets of London, looking for his shadow in vain. Did he ever find it? It sounds like Devo covering My Sharona.”

“Best bit on this is the ‘Uh’, before each chorus. His vocals in the verses are really weird, they put you on edge. It’s like he’s fucking with you, barking orders at you. I’ll do anything, Gary.”

“The vocals are really great on this, they sound like they have real meaning. For me this song is about taking control, and trusting yourself when others doubt you. It’s like you’re travelling into another world when you hear that warped synth bass line. If you were the only person left on the earth, what would you do?”

“This song sounds like a working machine. Nine Inch Nails do a good cover of this one. It sounds like a saw cutting through my ethereal being. Teutonic Knights slaughtering those who stood before them. A 1200-watt microwave oven on a hot summer’s day.”

“More industrial guitars to finish us off. The futuristic high-pitched synth solo makes this track. It’s ironic he sings ‘Are you real’, when his next output heavily uses synthesis. It reminds us of going to a till in a supermarket and the checkout woman is a robot and goes ‘Hello, have you got your club card?’ and her hand falls off.”

Autobahn’s new album, The Moral Crossing, is available now via Tough Love Records. Check out the single, Execution/Rise, below.