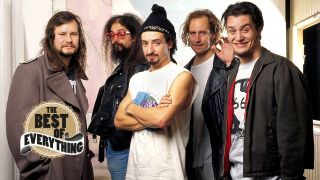 It was only after writing and releasing The Final Clause Of Tacitus’s first instalment, Peace In Chaos, that I truly discovered Faith No More. I knew who they were of course – I’m not completely ignorant – but, it was only after people started telling us how much our music reminded them of their early work did I actually take an interest and become a real fan of theirs. So, without further ado, here are my top 10 Faith No More songs.

Not an obvious choice, I admit, but to me it really showcases their earlier sound. The ever-prevalent synth playing, a dark series of dark chords mixed with the funky bass and relentless drums builds the perfect bed for Mosley to really let go vocally. Then you finish off with that haunting piano that just comes from nowhere. Love it.

One of the calmer songs on this list, and a reason why Faith No More is not just any old band. The synths simply soar and take you away.

Not my favourite album of theirs, but, this song shines out as one of my all-time favourites. The dynamics in this song are masterful. It takes you through an odd spatial atmospheric landscape in the verses, to that thick and full chorus and everywhere in between via the bridges. Great song.

When does Faith No More not sound like Faith No More? Never, that’s when – even when they go full obscure like on this track. It’s like Captain Beefheart travelled to the future and discovered heavy metal. It can only really be described using Beefheart’s own words: “A squid eating dough in a polyethylene bag is fast and bulbous.” Why these words describe this song so well for me, I will never know. But there it is.

Classic Faith No More music with some of Patton’s best lyrics. If you haven’t listened to the lyrics properly in this song, you are missing out.

One of Faith No More’s strengths is how they combine their many different musical influences, and Woodpecker From Mars is truly the pinnacle of this marriage of genres. Thrashy guitars from Jim Martin, Mike Bordin’s relentless assault on Drums, Billy Gould’s unmistakable slap-bass and that quintessential synth from Roddy Bottum. To merge it all together in a way that makes you want for nothing else is so truly masterful that you almost forget that Mike Patton didn’t even sing on it!

Although obviously written and recorded as the titular track to their first album, this is the definitive recording of the song for good reason. Chuck Mosley smashes the vocals out the park in this version and with Billy’s attitude-oozing bassline; it’s like the song punches me right in the face every time I hear it, but in a good way… Is that possible? Yes. Yes it is. This song is proof.

You find me a person that claims not to know this song and I’ll show you a liar. There is a reason this song is so well known: it is awesome. End. Of. Story.

Most people wouldn’t put this so high up their list, but I have never been most people. It’s here for more reason than just the provocative lyrics and punchy music, though. It’s here because I love that Roddy Bottum wrote this for the sole purpose of trying to make Mike feel awkward on stage. It exemplifies the friendship and closeness of the band at that time, and I just love that.

You know a great song immediately as you feel the shivers run down your spine. You raise your head up and inexplicably exhale slowly in a hope that you can extend the feeling. This song does that and more to me. It’s like you can feel everything Mike Patton feels as he delivers his inspired and meaningful lyrics. The song takes you on a musical journey that leaves you wanting to listen to the whole eight minutes over and over to feel the range of emotions it takes you through. It is Faith No More in their truest form.

The Final Clause Of Tacitus’ EP Not Like The Rest will be released on February 9th. Check out the video for new single Walk On The Moon below:

Faith No More: The Real Story

The Story Behind The Song: We Care A Lot by Faith No More