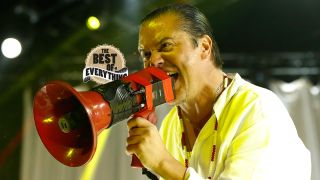 Some may dismiss Faith No More as “the band who wrote Epic then split up,” and for that they’d be a bit wrong. Since coming to prominence with a newly installed vocalist in Mike Patton for third album The Real Thing circa 1989, the San Francisco legends have defied genre, trends and the expectations of critics and audience alike. Funk, disco, thrash, pop, hip hop, lounge and more have all been lovingly desecrated by Faith No More over the course of their career – and that’s before we even get to their covers. So here, for your digitised delectation, are 10 times the band picked up the rulebook and, in Patton’s case, probably had a piss in it.

Faith No More’s fourth LP, Angel Dust, contains a cover even more leftfield than this. But let’s deal with this one first. John Barry’s theme for the ridiculously brilliant film Midnight Cowboy is debauched in the most spectacular fashion, Toots Thielemans’ iconic harmonica lines replicated by, er, Patton puffing away on a melodica. “I’M WALKIN’ HERE!”

Appearing as a B-side on both Evidence and Ricochet’s Orange edition singles – somewhat amusingly next to versions of G.G. Allin’s I Wanna Fuck Myself – Bert Kaempfert’s musical piece Spanish Eyes is given the Faith No More treatment. Again, it’s largely true to the original, Mike Bordin having to bite his lip lest he explode behind the drumkit while Roddy Bottum’s sexy synth underpins the whole affair, lending it a distantly Faith No More feel. We’re still suckers for the Engelbert Humperdinck version, though.

Rolled out as a “special San Francisco treat” during Faith No More’s 1997 gig at the city’s Warfield Theatre, Deep Purple’s Highway Star is shaved into just a minute’s breadth. Patton out-Gillans Ian Gillan, Bottum’s keys are so hammed-up you could stick them in a sandwich and the sheer glee with which the band rip through this classic is tangible. Hard to believe they broke up just six months later, eh?

Earlier on, it might’ve seemed like Faith No More were being ironic when covering Herb Alpert’s late-night, sipping-hot-chocolate-in-front-of-a-log-fire favourite This Guy’s In Love With You. Later down the line, it’s obvious that the band love playing this as much as they do Motherfucker; even Patton’s whistling, ludicrous as it may be, is delivered with complete conviction and only the slightest hint of a smirk.

Faith No More reunited and IT FELT SO GOOD. Opening their Second Coming tour with this cover of R&B duo Peaches & Herb’s best-known hit took some bottle but, well, it’s Faith No More we’re talking about. Patton hobbling on stage and trading verses with Bottum at Download Festival 2009 is every bit as poignant as anything Guns N’ Roses, Metallica, AC/DC and their lot have carved into Donington folklore.

The baroque zeal of Sparks’ best-known single was already an absolute winner. It still is. Brothers Ron and Russell Mael revisited their catalogue on Sparks’ 1997 Plagiarism, enlisting Faith No More to guest on Something For The Girl With Everything and This Town Ain’t Big Enough For Both Of Us. The latter is sillier, heavier and even more bombastic than the original, Patton’s Donald Duck wails sprinkling the track with a little grit. Sparks were actually invited to play this alongside the band at the Hollywood Palladium in 2010, bringing with them live guitarist Dean Menta, who also toured as Faith No More’s axeman on the King For A Day… Fool For A Lifetime run. So that was nice.

Popping up as a B-Side to Digging The Grave and on some editions of Album Of The Year, this take on the Bee Gees’ soppy single only got real recognition by those outside the Faith No More bubble after they broke up, due to its accompanying video. And yeah, the video’s decent – Rose Tyler’s Dad from Doctor Who and a pre-fame Martin Freeman both star – but when Patton’s final vocal hits Freeman, the Hobbit’s reaction is akin to ours: total disbelief. Less than a decade prior, we had Epic. We somehow ended up with this.

It’s just War Pigs, innit? Patton’s purposefully nasal delivery on The Real Thing conveniently aligns with that of Ozzy Osbourne and then some, Bordin’s dexterous drumming and Gould’s boulder-breaking bass being more than a match for Sabbath’s Bill Ward/Geezer Butler rhythm section. And no, Jim Martin’s not Tony Iommi, but his colourful delivery further ensures that this is more than just a ploddy rehash. The best Sabbath cover ever? Probably. We just wish Faith No More had played this when they supported Sabbath at Hyde Park a couple of years back, though.

The Story Behind The Song: From Out Of Nowhere by Faith No More

Leaders Of Men: The Unlikely Rebirth Of Faith No More