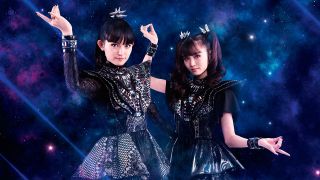 Brought high-kicking, screaming and singing to life by the mysterious Fox God, Babymetal crashed into our world and immediately divided opinion. While some loved their approach of welding Kawaii to kick drums, others felt Su-Metal, Yuimetal and Moametal were making a mockery of the very scene they purported to love. But despite being reduced to a two-piece they’re bigger than ever. It’s time to put your kitsunes up for their best songs.

Babymetal proved their allegiance to the world of metal once more on their most recent album by including a guest spot from Arch Enemy badass Alissa White-Gluz. Futuristic and fun, Distortion's like a rollercoaster ride where you have to throw your kitsunes up.

A sugar-rush of a song, with fun dances moves to march. Perhaps an odd one out in an album that features a ton of global metal influences, it's just a straight-up Babymetal banger.

Teaming up with Dragonforce was bound to turn up the power metal ante and raise the tempo, but no one could have predicted how insanely fast the fretwork would be. After hours of rehearsals from both camps, their performance of the song at 2016’s Golden Gods awards was a triumph.

Sung by Black Babymetal – aka Yuimetal and Moametal – this duet boasts big riffs, propulsive verses and a clean breakdown that are all tailor-made for headbanging. It’s no wonder, then, that the lyrics pay tribute to the love of the mosh. The poppy melodies offer a chance for some bonus fist-pumping.

The original, the classic, the song that launched Babymetal to thousands of bewildered pop and metal fans the world over. The refrain is more saccharine than a gallon of Cadbury’s Creme Eggs, but the lyrics are oddly feminist, discussing the pressure on women to maintain a certain weight and image.

Referencing chewing gum and bubble gum, Awadama Fever’s high-pitched chorus is the spiritual successor to Gimme Chocolate!!. It’s as if Babymetal have consumed a zillion sweet treats in one go, breezing through this sugar-rush of a heavy drum’n’bass song with boundless energy and smiles plastered across their faces.

It’s Babymetal’s first battle metal song! Expanding on the victorious vibe of Road Of Resistance, it offers a marching beat and assertive chanting, while the girls sing in unison with military precision. The best bit? The folk metal accordion, which would be completely incongruous in any other tune by the trio.

The One shouldn’t work. A mash-up of ‘80s guitar soloing, the closing number of a musical and the pure sheen of Disney, it’s the sonic equivalent of a year-old slab of brie. But watch them perform it while floating over the crowds in a giant pyramid, and the feeling of elation is undeniable.

Parts of this sound genuinely sinister. Most Babymetal songs have a breakout sing-along moment or bouncing beat, but this one rolls along like a runaway ghost train powered by mechanical drums and chaotic piano. Even the usually upbeat Su-metal sounds uncharacteristically tortured, wailing mournfully in the bridge.

Their slickest genre fusion yet. It opens with a chunky nu-metal riff, before Su-Metal’s captivating minor vocal line comes in, switching to a major key for the band’s best-ever chorus. Listening to this triggers your cells to make 100% more serotonin. Fact. Altogether now: ‘Oh-oh, oh-oh, oh-ohhhhh!’