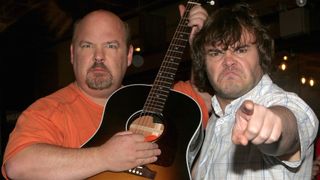 In 2001, Tenacious D released Tribute, an epic rock lament to writing the greatest song in the world… and then forgetting how it went. Not only did it set Jack Black and Kyle Gass’s comedy duo on the road to festival greatness, the video also showcased just how much Dave Grohl was born to play the Devil. Here, Gass explains how the song was born…

“It even evolved over time. We had the Stairway riff in there. But that was too on-the-nose. Then we got it down to the tight five minutes or whatever, and it became our signature song. But it’s so strange, it really was the first song that we worked on. We’d written this one little serious song before that, that we didn’t like that much. Or Jack didn’t like it. And then Tribute. So it’s all been downhill ever since, it’s the craziest thing.”

“It’s really quite flattering how much people like it, it’s been really great. When I was at a huge festival they played it over a loudspeaker and everybody sang along. And I thought, ‘Well that’s it, I’ve done it.’ I just couldn’t believe it, it’s so awesome. And you see a lot of kids covering it, like in high school talent shows, and they’ll send me the video. Wow, that’s just really neat, you know? The worse the better, I always enjoy them!

“The making of the video was really good. Our first video was Wonderboy, which we shot with Spike Jonze. And it was epic, he had a vision in mind and it cost a lot of money, but I don’t think it was very funny, so it was strange for us to come out with something that wasn’t really funny. So for Tribute we employed our good friend Liam Lynch, and he had shot some funny videos for next to nothing. We just wanted to really come out and do something crazy and entertaining. And then we got Dave Grohl to be the Devil, so it was just a great day. We shot it in one day on the cheap and just put it all in there. Dave’s the best! And he of course was reprised in The Pick Of Destiny.

“Are there any plans to write new songs? Always! Secrets!”

The Kyle Gass Band will release their album Thundering Herd on October 14.