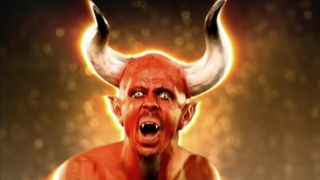 It’s a serious business, this heavy metal lark. To the uninitiated, the genre is populated by millions of stoic rockers impaired with a sense of humour bypass. But we know that there are metalheads willing to crack a smile and lead the lambs to the (s)laughter. Here then, are the 10 best comedy metal songs.

As Limp Bizkit reached their commercial peak at the turn of the century, guitarist Wes Borland seemed to tire of the band’s music and image. So what better way to alienate yourself from your fans than release a bizarre metal album under the name Big Dumb Face? Equal parts Monty Python, Munchkin and black metal, Duke Lion Fights The Terror!! was a swirling cacophony of high-pitched, gurning, oddness, especially the monstrously heavy Blood Red Head On Fire. It’s like Ween meets GWAR. But far weirder.

Standing at a toweringly evil 6’6.6, Posehn has established himself as the planet’s Number One metal comedian and has even released two albums through Relapse: Live In: Nerd Rage (2006) and Fart And Wiener Jokes (2010). And this spoof of modern metal – featuring thrash team Scott Ian, Joey Vera, John Tempesta and Jonathan Donais – is not only cutting, it’s totally accurate in a way that could only come from someone that loves the genre. Look out for the nod to Megadeth’s 1986 video for Peace Sells featuring Bob Odenkirk of Breaking Bad fame.

While some of the songs on this list are composed to sound like sketches, crossover supergroup Stormtroopers Of Death – featuring Anthrax’s Scott Ian and Charlie Benante, Nuclear Assault’s Dan Lilker and M.O.D.’s Billy Milano – gained a reputation for dishing out bad taste one-liners like dinners at a school canteen. After all, their ‘ballads’ dedicated to a laundry list of fallen rock heroes had all the tact of a Frankie Boyle gag. But on their second album, 1999’s Bigger Than The Devil, they curbed their spite for a moment to ponder the career path of a certain Swiss extreme metal band.

Quintessentially British and inspired by the same school of anarchic alternative comedy as The Young Ones , Lawnmower Deth arrived in the late 80’s parodying thrash and grindcore, whilst still writing genuinely great metal music. Just check out the bonkers Sheep Dip for proof of both.

This Hollywood quartet write such perfect glam metal anthems that to dismiss them as a comedy band seems a little unfair. Not only does Community Property ape the omnipresent power ballads of the 80’s with deadly precision, but wonderfully prods fun at the attitude of the hair metallers of the time.

Three Little Pigs became a staple on MTV in the early 90s thanks to its brilliant claymation video and excellent, riff-heavy retelling of this terror-filled pork fable. The song – taken from their 1992 album Cereal Killer – boasts cameos from Tool’s Maynard James Keenan and Sylvester Stallone. Well, it sounds like the Hollywood side of beef, anyway.

GWAR – Sick Of You

These Richmond metallers don’t just look funny, they sing about funny stuff too. Sick Of You – taken from their second album Scumdogs Of The Universe, released in 1990 – perfectly captures the feeling of hating someone just because they eat white toast and suffer from bromodosis. This litany of hate is recited over a brilliant chugging metal riff. Good work, alien chaps!

The ultimate stoner death metal band. Anyone that doesn’t see the amusement in a band taking Cannibal Corpse’s death metal blueprint and pumping them full of weed-based puns needs to sit down and chill out. The joke pretty much begins and ends with the song titles, but the fact they’re delivered gift wrapped in brutal death metal means the gags never wear thin.

Tenacious D – Jack Black and Kyle Gass – are certainly the most successful parody outfit in rock, or metal if you believe The Grammy Awards. They’ve built a sizeable career from their love of heavy metal clichés and potty-mouthed flights of fancy. This is their biggest anthem, and also their best.